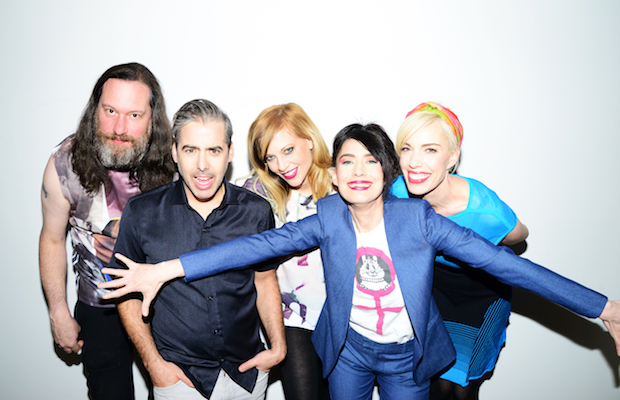 Out in support of their fantastic new LP Hit Reset, Kathleen Hanna-fronted, New York based punk/alt rockers The Julie Ruin are set to play Nashville for the first time ever tonight, Aug. 16 at Mercy Lounge, along with Olivia Neutron-John. A seminal force not just in punk, but in third wave feminism and the riot grrrl movement, Hanna is still the same skilled performer, outspoken activist, and all-around badass that you’ve come to know through her various musical outlets over the years, and The Julie Ruin are absolutely stellar; their weekend set at Atlanta’s Wrecking Ball basically stole the show. Tickets for tonight’s performance are still available here, so secure your spot now and find out more about the lineup below!

If you’ve not yet caught wind of The Julie Ruin, you could be forgiven, since the relatively new New York rockers formed only in 2010, and have released just two full-lengths, the most recent, Hit Reset, this year. However, you should know them for their pedigree, as both frontwoman Kathleen Hanna and bassist Kathi Wilcox were part of seminal punk group Bikini Kill (and for their respective post-BK projects like Le Tigre and The Frumpies), widely considered pioneers of the riot grrrl movement. Kathleen actually released a solo album under the moniker “Julie Ruin” in 1998, but the band The Julie Ruin came much later, rounded out by Carmine Covelli, Sara Landeau, and Kenny Mellman. They released their debut, Run Fast, in 2013, and have really been amassing a new wave of buzz for Hit Reset, which feels like a culmination of Hanna’s storied and influential career, incorporating a sense of humor, strong feminist themes, punk bite, and even some dance influence. We saw them in person over the weekend, and can definitely confirm that their live show is every bit the smart, electrifying, fun, and solidly punk experience you’d expect.

Olivia Neutron-John is the experimental/electronic musical vehicle of Washington, DC’s Anna Nasty, also known for Chain & the Gang, Neonates, Hell-Kite, and Vegetable. Anna’s genre-bending, expansive sound feels impossible to accurately describe; lo-fi and futuristic, hypnotic and droning, it manufactures dreamy, layered, sonic landscapes, mixing electronics with organic sounds like saxophone to form a style that’s not quite like anything else we’ve ever heard. We suspect that this project takes on even a different life in concert, so we’d definitely encourage showing up early to see for yourself.