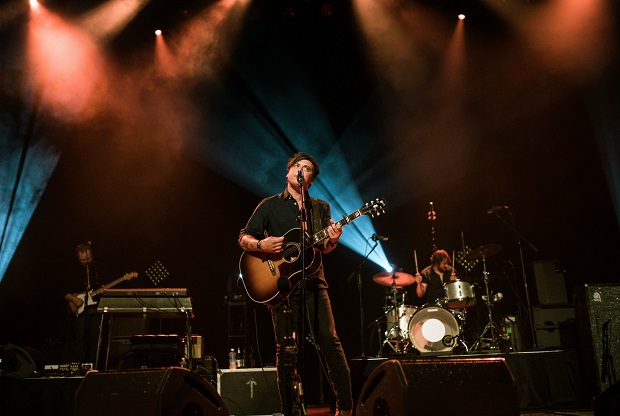 Just a few months after releasing their sophomore album Lonely is a Lifetime, Nashville-based rockers The Wild Feathers made their debut at the Ryman Auditorium to a sold out-crowd. After years of relentless touring and honing their live show, they came back home to check one more huge accomplishment off their band bucket list. Fellow folk-rockers Jamestown Revival also made their first appearance at the venue and kicked off a night that neither band will likely ever forget. Click below to check out our full review, along with some amazing photos from Nolan Knight.

If you’ve ever attended a Wild Feathers concert, you’ve probably noticed the huge age range in their fan base. Their first headlining show at the Ryman brought out everyone from Belmont students to middle aged parents for a night of live music. It can be hard to get anyone to go to a show on a Saturday night in Nashville, but these hometown boys had no problem quickly selling out their first time at the historic venue.

Before the Feathers headed on stage, Jamestown Revival provided a solid set for their debut at the Ryman. If you aren’t familiar with the Texas duo’s sleek harmonies and brilliant mixture of rock and folk, you’ve been missing out on a lot. During their performance, members Zach Chance and Jonathan Clay showed off their stellar voices and the catchy hooks that have earned them plenty of acclaim in recent years. From the show-stopping acoustic performance of “Golden Age” to the anthemic “California (Cast Iron Soul),” there was never a moment that left the audience feeling like it was a good time to buy a $9 plastic cup of wine.

After a quick set changeover, it was time for The Wild Feathers to finally make their way onto the Ryman stage. When I chatted with them a week earlier at East Nashville dive bar Mickey’s Tavern, the band shared their excitement over the prospect of playing one of their collective favorite venues.

That excitement, bewilderment and slight nervousness were all visible during their opening song, “Help Me Out.” There was an obvious and almost frantic energy between the group as they ran through each line and rhythm, almost as though they had something to prove. As a fan who has seen them meticulously and intentionally evolve their live show over the past three years, I already knew that they were more than capable of supplying a memorable Ryman debut. Still, it was clear that they weren’t going to walk off the stage without knowing that they gave everything they could. 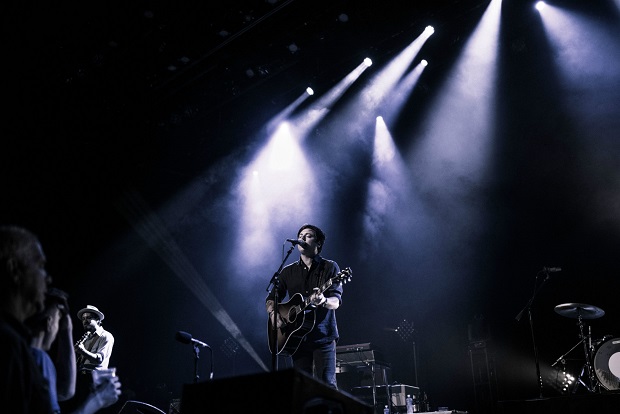 It wasn’t until the band flew through their recent single, “Overnight,” and fan favorite “Backwoods Company,” that member Ricky Young stopped to acknowledge the important moment they were in. “We’re proud to say that we’re The Wild Feathers from Nashville, Tennessee,” he said simply to the cheering crowd.

Although they only have two full length records behind them, those two albums supply more than enough material for a killer live show. There’s no filler on either their 2013 self-titled debut or this year’s follow-up, Lonely is a Lifetime, and that’s never more clear than during their concerts. From “Got it Wrong,” “Left My Woman,” to “Goodbye Song” and breakthrough single “The Ceiling,” the band supplied a steady stream of perfectly executed rock and roll.

The show went by in what seemed like record time, mostly because of the group’s hypnotizing stage presence and incredible catalog of music. They wrapped up the night with a cover of the Beatles’ “With a Little Help From My Friends,” which they appropriately performed alongside Jamestown Revival.

For many bands, the reality of trying to win over the Ryman crowd while trying not to be too intimated can result in a messy and uncomfortable set. After spending the past few years consistently touring, The Wild Feathers managed to show concertgoers why and how they’ve grown from a grinding Nashville band to a internationally-known, well-oiled machine.