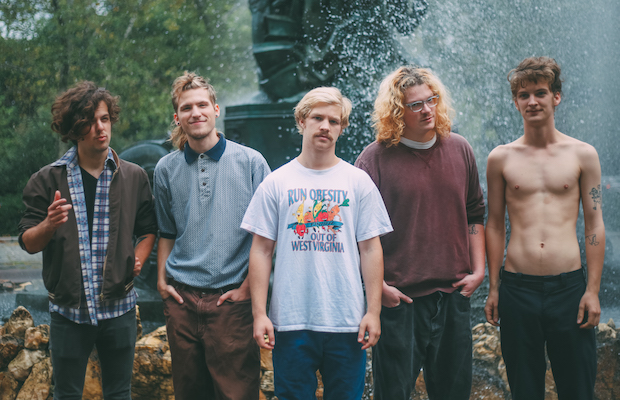 Baltimore based grunge pop quintet Sun Club got their start nearly 10 years ago, as a group of teenagers with more idealogical ambition than talent, but they are an example of how hard work and dedication can pay off.  Starting off as a trio, brothers Shane and Devon McCord and next door neighbor Mikey Powers played around with their sound while learning their instrumentation early on, starting off in a grunge outfit that gradually veered toward pop.  Things really began to gel when they recruited two more members to fill out the band, and they began deconstructing pop songs, and reforming them with off-kilter time signatures, gleefully unhinged vocals, and hooks a plenty.

Sun Club was first recognized with their 2014 EP, Dad Claps At The Mom Prom, and have really seen their star rise with the release of their debut full length, The Dongo Durango, on ATO Records just last year.  They have been on the road ever since with their raucous live show in support, traversing the states in their van named Booty, and playing with acts like Alvvays, Fidlar, and Fat White Family.  If you are a fan of jangly reverbed pop jams, then Sun Club is definitely one that you need to add to your Roo schedule.  Have a listen below to get in the know before you go.