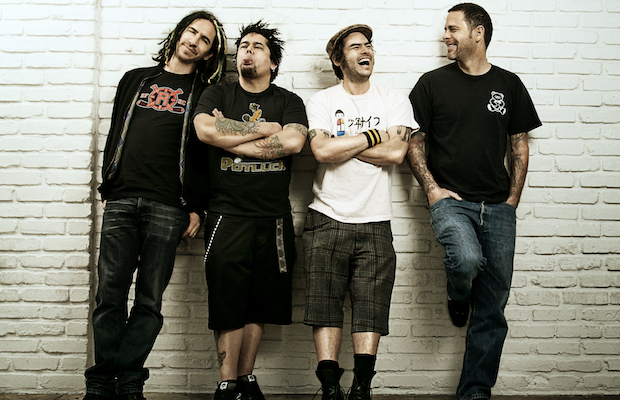 Pop punk, and, largely, the punk scene in general has been safety proofed, commodified, integrated into the mainstream musical echelon, and elevated to a platform of attention, scrutiny, and commercialization that has, for all intents and purposes, transformed it into just another genre, a genre with identifiable fashion choices and sonic impulses, and one whose label has become increasingly catch-all. Because of this, it’s sometimes easy to forget, especially for the under-30 crowd, that punk was a real, bon fide countercultural movement, and existed in a realm in square opposition to the mainstream for many years.

The purity or credibility of anyone’s legitimate, inherent punkness is a whole separate discussion, but in those years between punk’s first, mainstream boom in the late ’70s to its second resurgence in the ’90s, the scene sunk back into a state of danger, filth, violence, and hedonism, flourishing thanks to being largely ignored, attracting damaged, depraved souls who lived the lifestyle and loved the music not for attention, not for aesthetics, not for any one, unifying reason really, but because something about punk called to them and lured them in and gave them a legitimate community, albeit a fucked up one, that they felt just damaged enough to embrace.

Bands who existed in this post ’70s boom and pre-’90s commercial revitalization didn’t do it for fame or money or even for the love of scene; they were punks because they were punks, and the ones who made it out, who stuck with it long enough to get good, who figured out how to express themselves in a way that would eventually strike a chord with the masses, don’t get nearly enough credit for making “punk” pretty damn easy for the next generation. Most people know NOFX for their breakthrough 1994 effort Punk in Drublic, which, along with albums from the likes of Green Day, Rancid, and The Offspring, helped make the world care about punk again. It also provided an early glimpse into NOFX’s real psyche; while their peers scooped up big label offers, used TV and radio to boost their presence, and rode the wave to superstardom, the scrappy Los Angeles quartet doubled down on their efforts to operate at the independent level, and have stayed that way ever since.

In their new autobiography, NOFX: The Hepatitis Bathtub and Other Stories, authored with the assistance of Jeff Alulis (ex-Dead Kennedys), the band provide a fascinating, exhaustive, confessional, and brutally personal account of their lengthy and influential career, which began in 1983 (though the book starts even earlier, examining home life, early exposure and attraction to punk, personal trauma and self-analyzation, and the path that led to the band’s eventual formation). Over 116 chapters, each told from a different band member’s perspective (a few ex-members, too), NOFX tell their own history, examine the often dark and violent early days of LA punk, explain their inspirations, pitfalls, and thought-process, and, undoubtedly, cop to more a few crimes. It’s never been a secret that NOFX are actual punks, albeit punks whose discipline and passion provided them with the focus and patience to make a career out of their craft, but the scope of their life and professional experiences have never been discussed at such depth, or laid out so raw and vulnerable for the world to see.

I’m of the mind that many musical memoirs are self-indulgent, disposable, or, at best, fluff. This one feels indispensable. It’s easy to forget, growing up in the post-comifidication-of-punk-world, how different things used to be. Today, one unruly member of a punk band commits an act of sexual harassment or violence, and the media and community at large hold them accountable; punk is part of the machine, and the machine has been sold and sterilized, folded into a monetized, always-on, utilitarian part of our culture, for better or for worse. In NOFX’s day, assault, rampant drug use, and violence were part of the package; we love so much to romanticize punk and identify with its rebellious spirit, but largely ignore its ugly underbelly and its own inherent contradictions, a scene of perpetual infighting and identity crisis, and one that hardly felt inclusive. The Hepatitis Bathtub doesn’t hold back, navigating the waters of this particular period in time, then watching it erode and fade away and morph into something new, through the eyes of one of its most important and persevering fixtures.

NOFX have never been the best punk band (they’d be the first to admit it), but they’re a goddamn important one, we need stories like theirs to be immortalized in this way so that we don’t forget the specifics of the scene that took place in the dumps and dives and shadows and shitholes. Whether you’re a fan of the band, punk in general, or just want to soak up an important, sometimes distributing, but always utterly fascinating piece of musical history, we can’t recommend this book enough. Available now through Da Capo Press, you can pick up a copy online, at most major bookstores, or download it in e-book form. Additionally, NOFX will be at Parnassus Books today, April 26 hosting a signing, and plentiful copies will be available in person. Though part of a tour that does include some performances, this particular event is a book signing only. It begins at 6:30 p.m., is all ages, and more information can be found here.