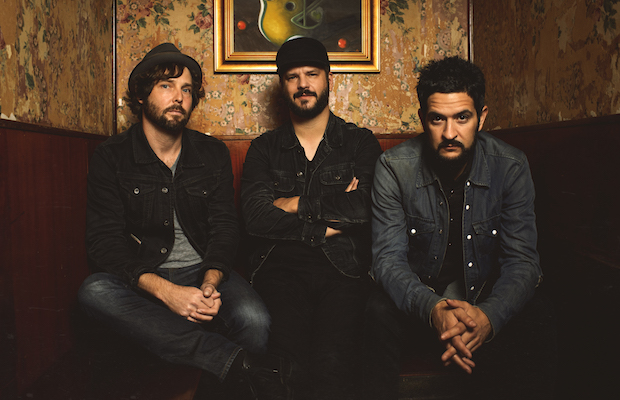 Based in Los Angeles, buzzy blues rock trio The Record Company‘s roots can actually be traced to 2010, when frontman Chris Vos relocated from his home of Wisconsin to pursue a dream of making music full time. After getting in touch with bassist/multi-instrumentalist Alex Stiff, the pair began to hang and listen to records, soon meeting drummer Marc Cazorla, and discovering their shared, common interest in blues, roots, and classic rock. An initial jam would prove immediate chemistry, and “The Record Company” was born as soon as they realized the name had inexplicably not yet been taken.

On the strength of two early, independent EPs, 2012’s Superdead and 2013’s Feels So Good, and thanks to hard work and self-marketing , the band soon bagged a jaw dropping assortment of TV and film placements, most prominently the center piece for a Miller Lite ad. Their debut full-length, Give It Back to You, arrived earlier this year through Concord Music Group, but even before that release, the band managed to play numerous festivals, and to share the stage with the likes of B.B. King, Social Distortion, Buddy Guy, and Grace Potter. Blending delta blues, soul, ’50s and ’60s rock, protopunk, and guitar rock influences, The Record Company are an eclectic and soulful band whose presence is definitely a welcome addition to this year’s Bonnaroo undercard lineup. Don’t miss the boat on these talented newcomers!

LISTEN | “Off the Ground”

NAWAS Show Off Low-Key Swagger With "So Low" Video