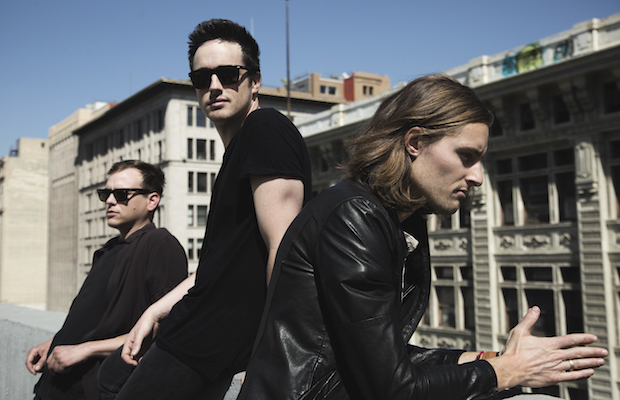 Back in January, we told you that pop rockers Parachute were set to return to Cannery Ballroom on May 6, in support of their brand new album Wide Awake. The record is being hailed as one of the band’s most mature and well-crafted releases, thanks to soulful cuts like “Without You.” They’re set to perform here their latest and greatest tracks with support from local pop singer-songwriter My + Red and Blue, and tickets are still available for only $21. If you’d rather enjoy a night full of emotional and energetic pop music for free, you’re in luck! We’re giving away a pair of tickets to one lucky reader, so click below to learn more about the show and for your chance to win.

Pop rock band Parachute hail from Charlottesville, Virginia, and have been supplying energetic and addictive tracks for over ten years. The group snagged a record deal while still attending the University of Virginia, and began touring full time as soon as they graduated. Thanks to their solid debut album, Losing Sleep, and the backing of Mercury Records, they landed gigs as support for artists like Kelly Clarkson, The All-American Rejects and Switchfoot. This exposure and the success of their singles “She Is Love” and “Under Control” cemented them as a pop group with substance and staying power. They went on to release two more LPs, 2011’s The Way It Was and 2013’s Overnight, which featured a mix of both danceable pop beats and soaring instrumental arrangements. After three years, the band is back with a more soulful and evolved sound on their latest album, Wide Awake. In many ways, the record is reminiscent of the group’s more rock-influenced works from earlier in their career, but with a new sense of wisdom that only comes with many years of writing and performing. Be sure to catch them at Cannery Ballroom for a night of music that will truly blow you away.

Ben Eggebrecht, aka My Red + Blue, is a singer-songwriter and Nashville transplant via Milwaukee, WI. The 23-year-old released his debut EP The Start in 2013 to high praise from online bloggers, who applauded his inspired version of reflective pop-rock. After a busy few months touring with A Great Big World, Eggebrecht released Closer Now, a brand new EP full of catchy melodies and relatable lyrics. We’re hoping he’ll release a full-length sooner rather than later, but make sure you see him live before he becomes the hottest ticket in town.

Winner will be announced Monday, May 2, and will receive one pair of tickets. Good luck!

The Aquaducks To Record Live Album at The Basement East Tomorrow!