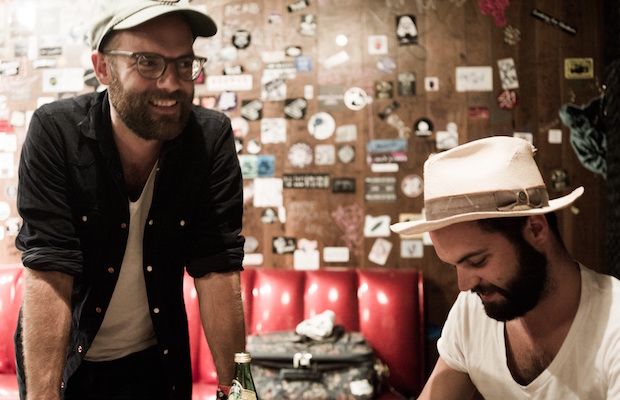 While we’ve been buzzing about Portland folk rock duo Quiet Life for ages now, and their stops in Nashville have been fairly frequent over the last few years, if they’ve been passing you by up until this point, it’s time to finally give the group your undivided attention. Celebrating the release of their fantastic new album Foggy, produced by Dr. Dog’s Scott McMicken, Quiet Life are quickly turning heads and garnering critically accolades, poised to become the breakout success story that their decade of DIY touring and endless string of wonderful records has prepared them for. Supported by locals BRUNS and Zach Schmidt, the band will return to The Basement tonight, April 11, and tickets are still available right here. Catch them in this intimate space while you still can; it feels like big things are inevitably right around the corner. Read on for details!

Though they’ve been around for more than a decade (and this writer has known them for just a long), in many ways, Portland folk rockers Quiet Life‘s latest and best effort, Foggy, is serving as something as a reintroduction to the broader mainstream music world. Incorporating elements of psychedelic pop, Americana, classic rock, and alt-folk, the band have always been anchored by brothers Sean and Ryan Spellman, and, though they’ve formally counted other members among their ranks over the years, they now seem comfortable and confident as a duo (rounded out live by backing players). Quiet Life got their humble, organic start in their native Connecticut, plotting DIY tours and performing countless shows across New England and the eastern seaboard, forging friendships with likeminded burgeoning acts like Dr. Dog, and evolving their sound with indie, self-made early efforts. The group uprooted to California as their career began to take off, eventually settling in their new home of Portland, and have released a series of impressive LPs over the last several years. Foggy, however, feels like their magnum opus, combining years of experience and miles on the road, lives lived coast to coast, and a personal and expansive knack for tiptoeing around an eclectic batch of influences without every staying from the sound that is Quiet Life. Recorded in Philadelphia at Dr. Dog’s Mt. Slippery studio, and helmed by that band’s own Scott McMicken, Foggy finds more refinement, emotional focus, and musical clarity than anything the band have made prior, and taps the talents of their many friends and collaborators to achieve and sonic cohesiveness that in unparalleled; not just Quiet Life’s best, it’s one of the best albums of 2016 so far, and you would be sorely missing out not to see the band at such a pivotal moment in their career.

Local trio BRUNS, still relatively new to the scene, were born from the breakup of frontman Tim Bruns’ previous project, Churchill. After briefly considering stepping away from music, Tim relocated to Nashville, and met Ryan Harris Brown and Tom Whall, which whom he joined forces to develop his new project. Focusing on musicianship and a developing a deep appreciation for the process of crafting new music, the group organically developed a classic, straightforward American rock sound, peppered with bits of folk and soul, and propelled by emotional earnestness. BRUNS’ self-titled, debut EP dropped late last year, and they should absolutely be on your radar if they’re not already.

Pittsburgh transplant turned East Nashville resident Zach Schmidt shares many of Quiet Life’s folkier qualities, but also embraces a broader set of country influences. With a knack for storytelling and personal, lyrical focus, the singer-songwriter’s debut EP, Horse or Truck or Train, is a real gem, and he seems wonderfully suited to warm up this stage tonight. Show up early to show him some love!