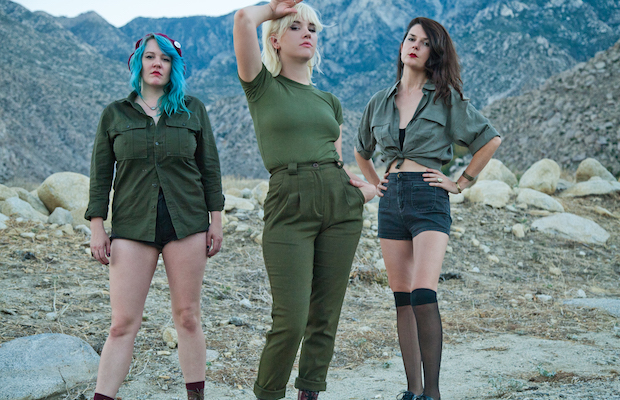 Two of the best underground punk bands Los Angeles has to offer, Bleached and No Parents, are performing TONIGHT, April 8 at The High Watt. Celebrating the release of their fantastic, best-of-the-year-contender new LP Welcome the Worms, Bleached have found a balance between melodic hooks and raw punk punk sensibility, while No Parents adopt a heavier, garage punk energy and wild live show. At just $10, this intimate outing is a total steal, and we can’t think of a cooler, more fun way to kick off your weekend! Read on for a full preview.

Los Angeles punk trio Bleached are anchored by sisters Jennifer and Jessie Clavin, who, since their teenaged years spent jamming in their parents’ San Fernando Valley garage, have collaborated on various projects, most prominently former band Mika Miko. After that group split, Jennifer and Jessie briefly went their separate ways, but reconvened about five years ago to form Bleached, adding more pop hooks and melodic sensibility to their grungy, raw punk sound, and making a strong first impression with 2013’s Ride Your Heart. However, it’s their brand new sophomore effort, Welcome the Worms, that really has our undivided attention, employing the production duties of Joe Chiccarelli (Morrissey, The Strokes, Elton John) and Carlos de la Garza (Paramore, YACHT), and incorporating bassist Micayla Grace into the creative process, for what is their most emotionally focused, lyrically substantive, melody-driven group of sounds to date. Don’t think they’ve shed any of their punk cred though; Bleached are the real deal, and more attention to detail and higher production standards just enhances their knack for crafting compelling, personal, and powerful songs at their core. We’ve heard that these gals rip live, and we’d seriously recommend seeing them now, because at their rate they’re garnering buzz, they’ll be in a much bigger room than The High Watt next time around.

Springing out of the same DIY Los Angeles punk scene as Bleached, No Parents are named after chant that used to occur at a friend’s frequent party house when, you guessed it, his parents weren’t around. After spending years honing their skills in other bands, the members of No Parents met by happenstance, and quickly became one of the hardest working bands in the LA punk/garage rock scene after forming in 2013, playing countless shows and really living the lifestyle, crashing in art galleries and DIY show spaces and facilitating the scene at the ground level. Known for their wild, rowdy performance style, No Parents dropped a proper full-length debut, May the Thirst Be With You, last year on Burger Records, and seem to be churning out new tracks at a pretty regular clip. Their heavier, more intense style should provide a nice contract to Bleached’s comparatively laid back vibes. Be sure to show up early!