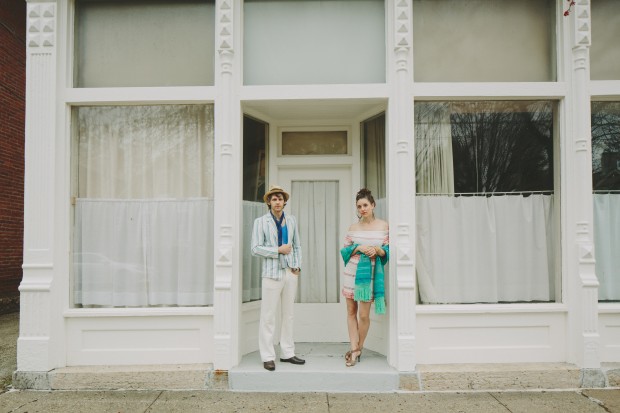 The husband-wife folk duo David Wax Museum are bringing their Mexican folk-influenced Americana pop to City Winery on Saturday, April 16 alongside fellow Americana-folk acts Darlingside and Haroula Rose. David Wax and his wife Suz Slezak have received high regards for their carefully researched approach to playing with traditional Mexican song and inserting it into contemporary Americana, resulting in a style they call “Mexo-Americana.” The pair have spent years studying Mexican folk music and have even traveled as cultural ambassadors, but their music is far from academic.

If you feel like getting your folk fix, we’re giving away a pair of tickets for this triple header, and if you aren’t so lucky to win a pair then they’ll run you $15-20. Read on to enter to win and to find out more about the lineup.

Wax and Slezak are the core members of David Wax Museum, supported by a rotating cast of musicians to achieve their unique Mexo-Americana sound. Both Wax and Slezak play offbeat, traditional Mexican instruments (including a percussion instrument called a quijada made from a donkey’s jawbone). Wax’s interest in Mexican music began during his graduate studies of son music in Veracruz. Their most recent record, 2015’s Guesthouse, features a title track that draws on several traditional Mexican folk songs for inspiration, and is a joking look at the musician’s constant concern of where to crash for the night.

Darlingside is an indie folk outfit from Cambridge, MA. The quartet takes their name from a bit of word play on the idea of “kill your darlings,” and plays experimental folk sans a drummer. They originally played as an indie rock band and some of their music still has remnants of that format, with their newest album 2015’s Birds Say using electric guitar fuzz and feedback in otherwise acoustic songs. But in the folk setup the members’ four voices and acoustic string instruments are the dominant force in Darlingside’s music.

Winner will be announced Thursday August 14, and will receive one pair of tickets. Good luck!

David Wax Museum, Darlingside, and Haroula Rose will perform April 16 at City Winery. The show is all ages, begins at 7 p.m. (doors at 6 p.m.), and tickets are available to purchase for $15-$20.

Bonnaroo Band of the Day: Judah & The Lion