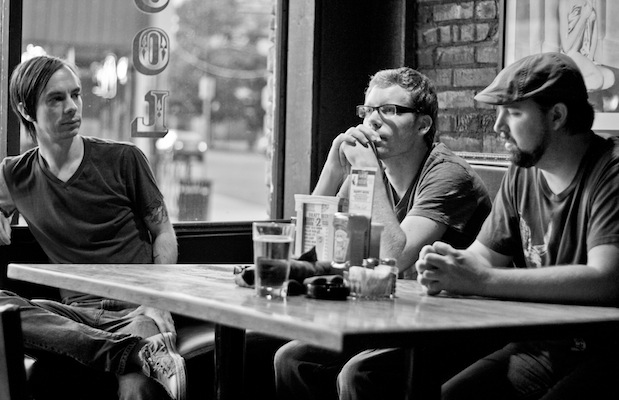 Grunge-pop rockers Anchor Thieves have crafted a music video for their song “Relapse,” a previously released single from their forthcoming album, Monolith, and we’re excited to exclusively premiere it for you below! The video is essentially different scenes from the 1968 film Voyage to the Planet of the Prehistoric Women (public domain) spliced together, which features sexy women scantily clad in seashell bikinis, wandering a coast and finding a dragon/pterodactyl-like creature, which the women are enchanted by and begin to worship. The song, by contrast, is about being addicted to and in love with a woman you can’t shake, as much as you might try.  Lead singer and guitarist Cayce Keller, who came up with the initial idea of using the film as the video, indicated that the video can be thought of more as background to the song than a parallel to the song’s story and lyrics. Check out our premiere of the video and read more about it below!

Anchor Thieves have adopted a DIY mentality, as both the music video for “Relapse” and the album Monolith are self-produced and self-made. According to drummer Simon Lynn, the group have always been fond of mid-20th century, vintage imagery.  In addition to that type of imagery in the music video, the album cover for Monolith features a superimposed image of an upside-down 1920s monument becoming engulfed by an erupting volcano. Despite an infatuation with modern imagery in today’s music, Anchor Thieves prefer to take us back in time. Come out and support their album release on Jan. 29 at The Stone Fox, where they will perform with The Dead Deads and Mystery Twins. You can buy tickets here, check out a two-song preview of Monolith on the band’s website, and pre-order the record on their Bandcamp.