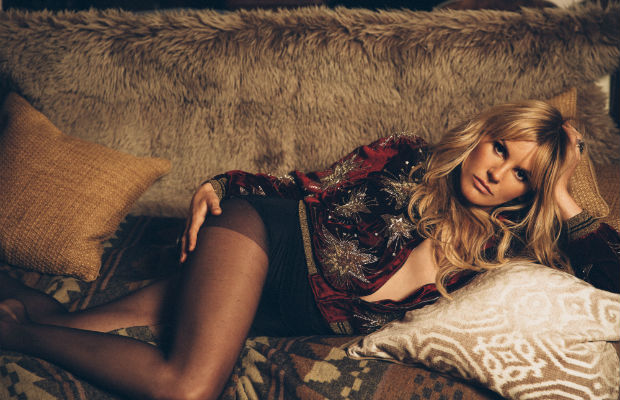 Grace Potter at times seems possessed by a soul sister of the ’60s; her vocal chops deserve some R-E-S-P-E-C-T. “Your Girl” is a favorite of ours on the new album, with more doo wop bass and a relatable and funny concept. “Empty Heart” is a new single with the strumming and clapping reminiscent of one Tom Petty or John Mellencamp. Her band creates rock, pop, soul, retro, and any kind of sound you want. They are true musicians with raging piano, rousing percussion, choruses of gospel voices, and pristine production.

The word has gone around for some time about her wild live shows. Grace has been described as “incredible” and “a true performer” by fellow music appreciators. Surely, she will play Grace Potter & The Nocturnals songs, like “Paris,”  the raucous “Ooh La La,” “Stars,” and a personal favorite: “Tiny Light” (an inspirational, hopeful “light at the end of the tunnel” kind of song). This weekend, go see a woman who embodies the sounds of the past with the styling of today and punches the piss out of her male competitors on stage.

Lake Street Dive are a quartet of fine musicians, who met at the New England Conservatory in Boston and, since 2004, have made their way up to Brooklyn, NY. With a viral Jackson 5 “I Want You Back” cover on YouTube and a blessing from T Bone Burnett to perform music from Inside Llewyn Davis at NYC’s Town Hall, Rolling Stone and The New Yorker were first astounded by their talent. Rolling Stone said this about LSD, “Bad Self Portraits, is a fresh, knowing collection of tunes that split the difference between Motown soul, Sixties pop zip, and British Invasion swagger. With award-winning jazz vocalist Rachael Price as their secret ingredient, LSD boasts an unflagging collective charisma and sense of humor that will take them far.” Bad Self Portraits is the perfect combination of what LSD does best: funny/relationship-driven lyrics, Motown fun, that doo wop pop, and one of the best ears for harmonization I have heard since the good ole days of Phil Spector’s studio.

Lead singer Rachael Price is from outside of Nashville, and we are interested to see how she reacts to this sort of homecoming. Her voice is lower than expected which brings to mind classically male soul voices over female. Isn’t that just the “topsy-turvy” androgyny our country needs right now (hint: it is)? And, yet she is visually quite feminine. With Mike Olson’s trumpet and guitar playing, Bridget Kearney’s bass playing, and Mike Calabrese’s drumming, (and all three backing with vocal harmonies) the group rounds out to a finely measured square of sound symmetry.

Grace Potter and Lake Street Dive will perform tomorrow, Oct. 10 at Ascend Amphitheater. The show is all ages, begins at 7:30 p.m., and tickets are available from $25 – $60.