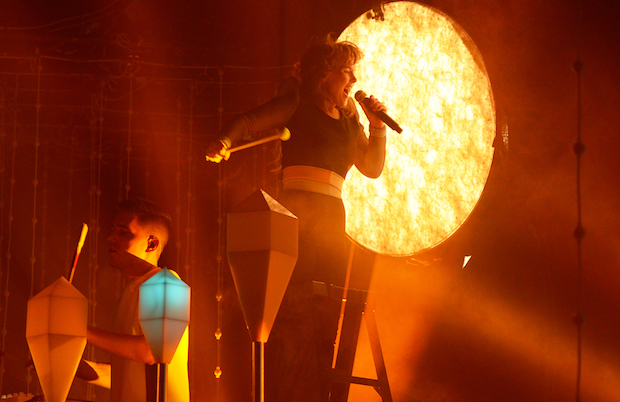 It’s been more than two years since Canadian electro-pop pioneers Purity Ring last played Nashville, selling out the Cannery Ballroom in January of 2013, mere months after filling sister venue Mercy Lounge. The duo’s absence was largely spent crafting their long-awaited and highly-anticipated followup to their beloved 2012 debut, Shrines, and in February of this year, the sophomore effort, Another Eternity, finally debuted, met largely with praise. The musical landscape has transformed around Purity Ring over the last several years; as the indie-electro-hipster scene has eroded in favor of more EDM-geared acts, we’ve watched their peers falter and disappear. Though they could, at worst, find themselves facing an identity crisis or, at best, end up sounding stale three years after emerging on the cutting edge of “futurepop,” Purity Ring have proven resilient, reaffirming their relevance and ability to innovate at their latest Nashville stop, last week at Marathon Music Works with HANA. A band driven in equal parts by their compelling live show and their haunting, unorthodox approach to songwriting, Purity Ring captivated a packed house, triumphantly returning after all too long an absence. Read all about  it below. 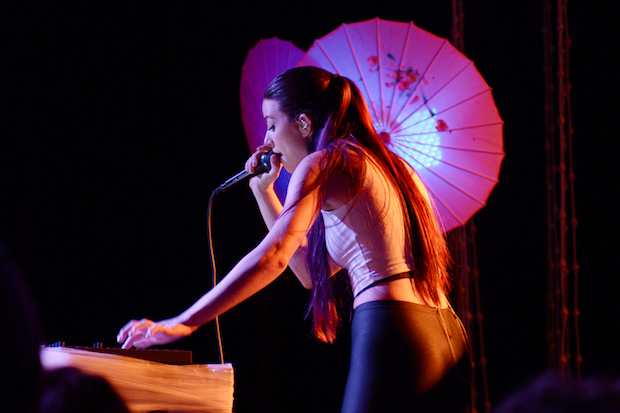 Admittedly, I knew very little about opener HANA ahead of this show, but after listening to the handful of singles available online, I was beyond intrigued. Boasting associations with like-minded heavyweights Grimes, Lana Del Rey, and Lorde, the young electro-pop songstress seems destined to be a big deal, and my first experience seeing her life definitely affirmed this assumption. Charming and talented, HANA played with a very minimalist setup, running her own tracks and samples from an electronic rig, commanding the show by herself with only a mic, and taking a Purity Ring-esque cue to production, with what appeared to be light-up paper umbrellas synced up to the music. Beyond breakout tracks “Clay” and “Avalanche,” I wasn’t too familiar with her music, but, nonetheless, found myself mesmerized by the earnestness in how she performed it. A genuine and humble talent, HANA proved a complementary and adept opener for the fantastic set to come. 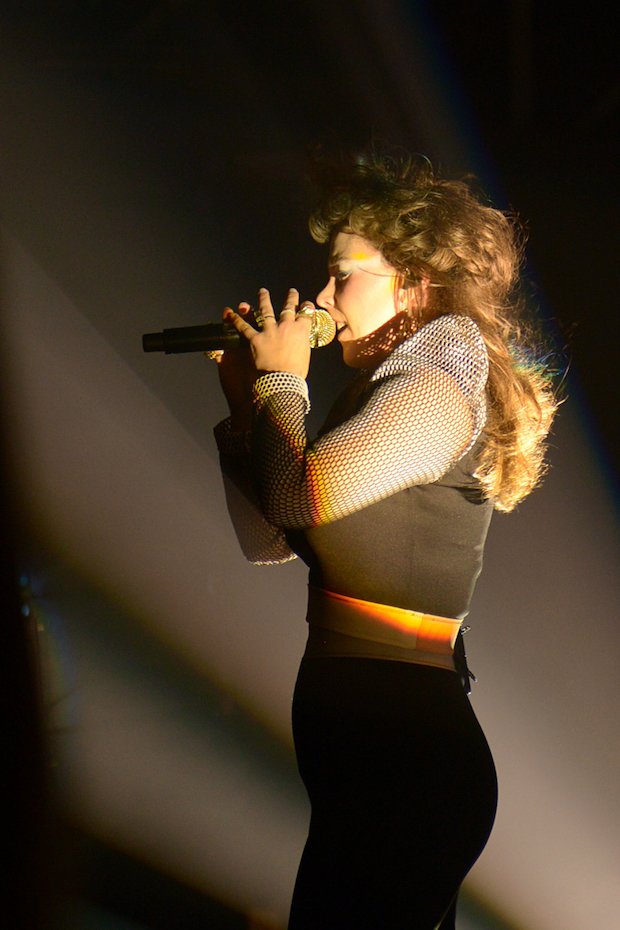 The first time I saw Purity Ring, several years back at CMJ, they hadn’t yet released an album, but, through internet buzz and a couple of singles circling the blogosphere, managed to amass a huge crowd, and accrue too much hype to live up to. Though, even back then, their inventive production and undeniable chemistry hinted at things to come, they seemed a little too green to fully execute their vision. Fast-forward to 2013, and a pair of local(ish) shows, first at Cannery Ballroom, then several months later at Bonnaroo, would showcase a whole new band: refined, confident, and boasting one of the best debut albums in recent memory to stack their set. Self-described “futurepop,” it would be easy to nitpick the specifics of just how to describe Purity Ring in the current (and recent past) musical landscape, but their ambitions, and especially their presentation have certainly always fit with that futuristic mindset. Thirsty for new music, I found Another Eternity to be a little lacking upon first listen, but, with months to let it grow on me, I now realize that it’s not only a wonderful and worthy followup to Shrines, but the encapsulation of a band always looking forward; it was never going to be Shrines part two, and, even though that’s what I (and, likely many others) thought I wanted, I’m glad that the duo reeled in their focus and make a poppier, more personal effort. Seeing it translated live put Eternity into even greater context, and showcased the dichotomy between both albums. 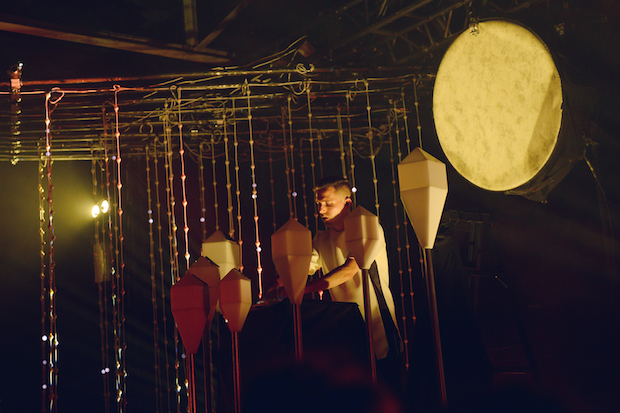 Decked out in her space-y, custom made garb, vocalist Megan James immediately stunned me with just how comfortable she’s become as a performer. The shier and more reserved demeanor of past shows has been traded for a frontwoman who prowls around the stage, interacts with the crowd, and banters between songs, staying unbelievably polite (they are Canadian, after all) and humble throughout. The group began the show with a driving trio of new tunes, before erupting into fan favorites (and Shrines tracks) “Obedear” and “Lifticries,” inciting tons of happy applause and the feeling of seeing an old and welcome friend return. Mostly playing songs in album blocks, the tonal contrast between older and newer tunes became pretty apparent; not that that was a bad thing, but at interesting glimpse at the band’s own musical evolution. Anchored to his control station, producer and multi-instrumentalist Corin Roddick boasted a bit of an ungraded setup since I last saw him live, using a new system of tiki torch or q-tip shaped light-up devices to cue samples, a long-running gimmick meant to enhance the interactivity and visual appeal of the group’s live show (and a great gimmick at that; it’s very, very cool to see). Gone too are the “pods” of last tour cycle; this time around, the stage looked like an electronic jungle, with light up walls and strings and strings of luminescent vine-like ropes, dynamic and constantly changing, but flexible enough for James to play off of.

Nashville’s usually reserved audience actually did a bit of dancing throughout this show, and, packed in, everyone remained hypnotized by Purity Ring’s dynamic delivery and constant momentum. Lit up like a moon, a large drum hung over the head of the stage, and, finally, towards the end of the show (I believe during “Flood on the Floor”?), James climbed a latter and struck it, with dramatic effect. Short and effective, Purity Ring’s set ended with a one-two punch of “Fineshrine” and “Begin Again,” eliciting dancing, sing-alongs, and, of course, and endless sea of camera phone videos. Explaining that they don’t do encores, the duo ended the show on a high-note, palpable energy in the air, leaving me wanting more. Hopefully their return will come sooner next time.

[No Country Premiere] Stream The New EP 'Phases' From Frances & The Foundation!