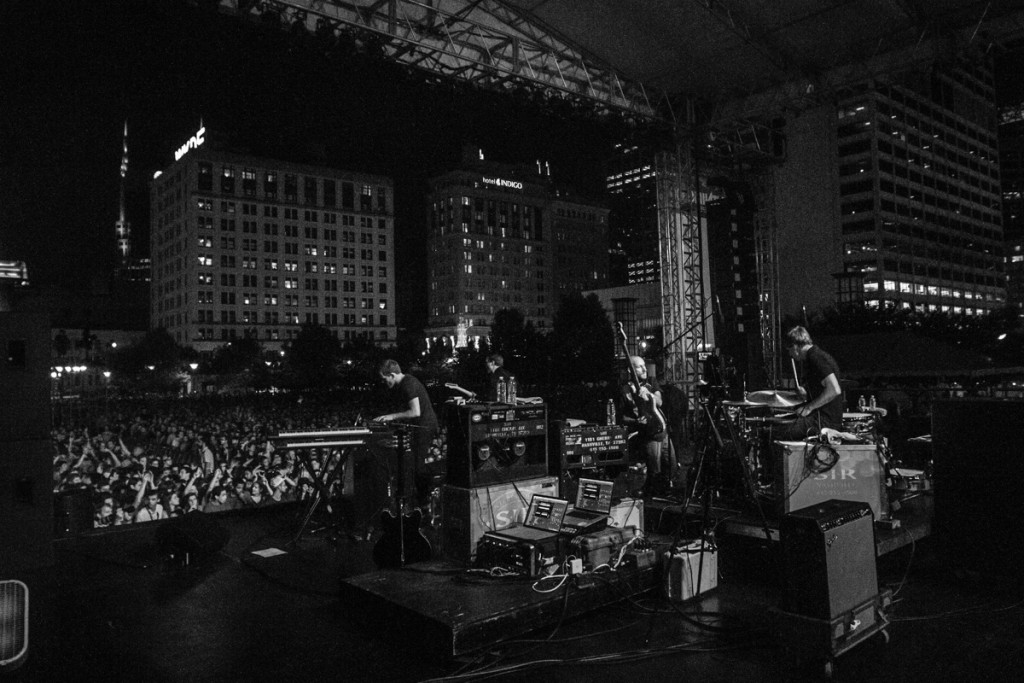 The second week of Live On The Green was greeted with below average temperatures that almost had us wishing we had packed a hoodie, but the cool weather was incredibly enjoyable for a huge crowd that gathered to cheer on indie rockers Cold War Kids, the exuberant bar room rock of J. Roddy Walston & The Business, and the chill harmonies of roots rockers Houndmouth.  Like we will be next Thursday and then for the three-day weekend blowout, we made out way to Public Square Park to revel in the fun and to catch another great edition of one of Music City’s most popular events.  Read on below for our thoughts and some shots from photographer Shawn Jackson of Sundel Perry.

It was my first LOTG of the year, and I was eager to see what 2015 had in store.  The set up, at least for the Thursday night events, appeared largely the same as year’s past, with a few changes in the booth layout, and seemingly less of the sprawling food truck land down Deaderick Street.  Word on the street from those in attendance last week was that the crowds were bigger than ever, which had me wondering if I was going to be able to find parking or would have to fight to get through to grab my media credentials.  However, as I arrived a few minutes into Houndmouth’s set, it felt like I was walking up to visit an old friend.  Folks were piling in with smiles on their faces, discussing the amazing weather, and preparing for a night of great music and fun. 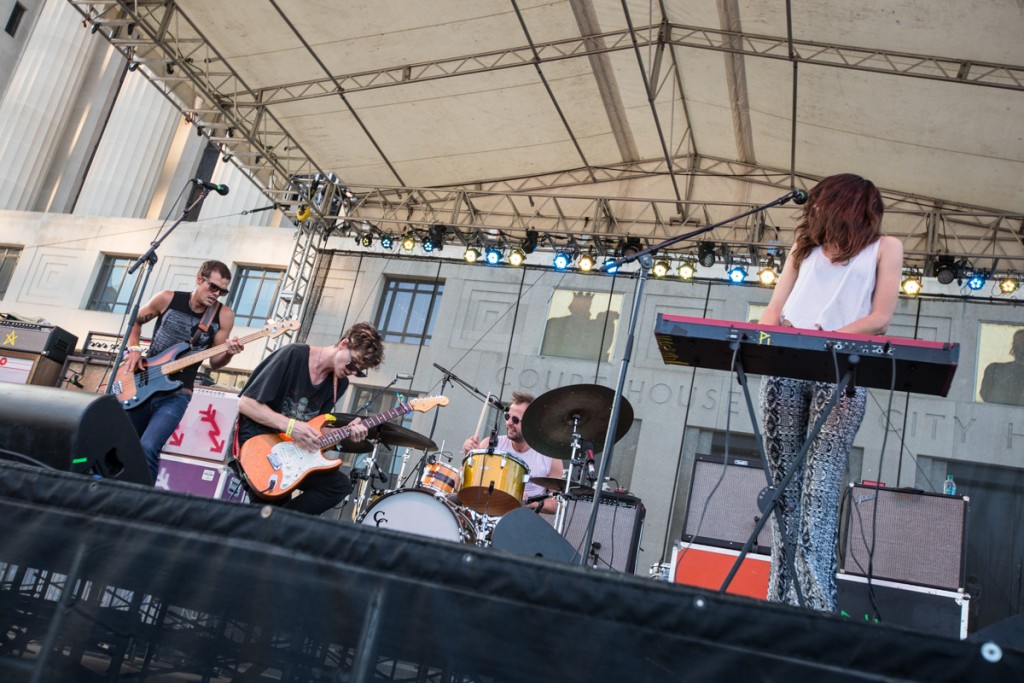 I’ve heard nothing but AMAZING things about Houndmouth over the past couple of years, but have yet to have the opportunity to catch them live.  So, I was kind of kicking myself for letting work force me to arrive 15 minutes into their set.  However, it didn’t take long for their smooth harmonies to take away the stress of the day.  A relatively new band, Houndmouth have really begun to make a name for themselves after a number of successful festival runs over the past few years, and they seemed ecstatic to play for the massive LOTG crowd, and even commented on what a cool festival, lineup, and location we have here in Nashville.  As I settled in for the end of the set, I began to see what everyone had been telling me about, their sound is a natural beauty.  It’s not covered up in heavy reverb or drenched in effects, it’s true folk based roots music that was pretty much the perfect opening to the evening. 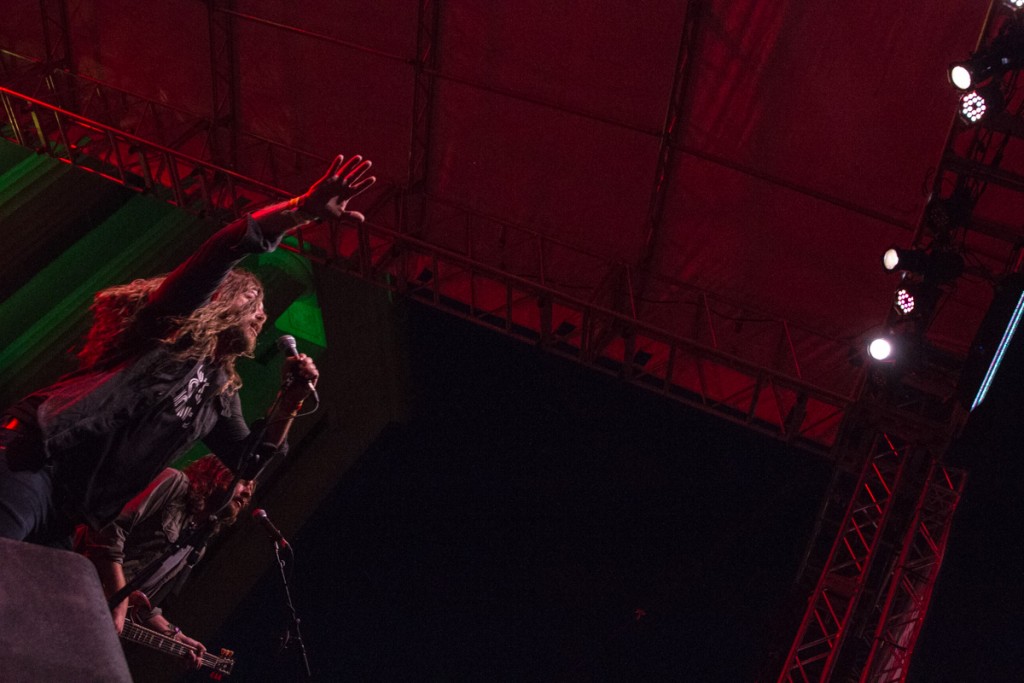 After a few technical difficulties and the wheeling of the ever touring piano onto the stage, J. Roddy Walston & The Business wasted no time in getting down to the proverbial business.  He sat down at the before mentioned piano and started pounding out the first notes of the track (“Don’t Break The Needle”) that made me take notice of them for the first time back in 2011.  J. Roddy & Co may call Richmond, VA home these days, but they formed down the road in Cleveland, TN back in 2002.  Since my first time seeing them at Bonnaroo in 2011, I’ve often wondered why they didn’t end up in Nashville, and it also had me wondering about their last show in Nashville that ended up at Exit/In rather than Marathon Music Works.  There were clearly a TON of fans that were only there to see J. Roddy Walston & The Business, as was evidenced by their (and my) singing every word to hits like “Take It As It Comes”, “Heavy Bells”, “Sweat Shock” at top volume; so, hey Nashville, the next time these guys put together a local date, let’s get out and support that, ok? 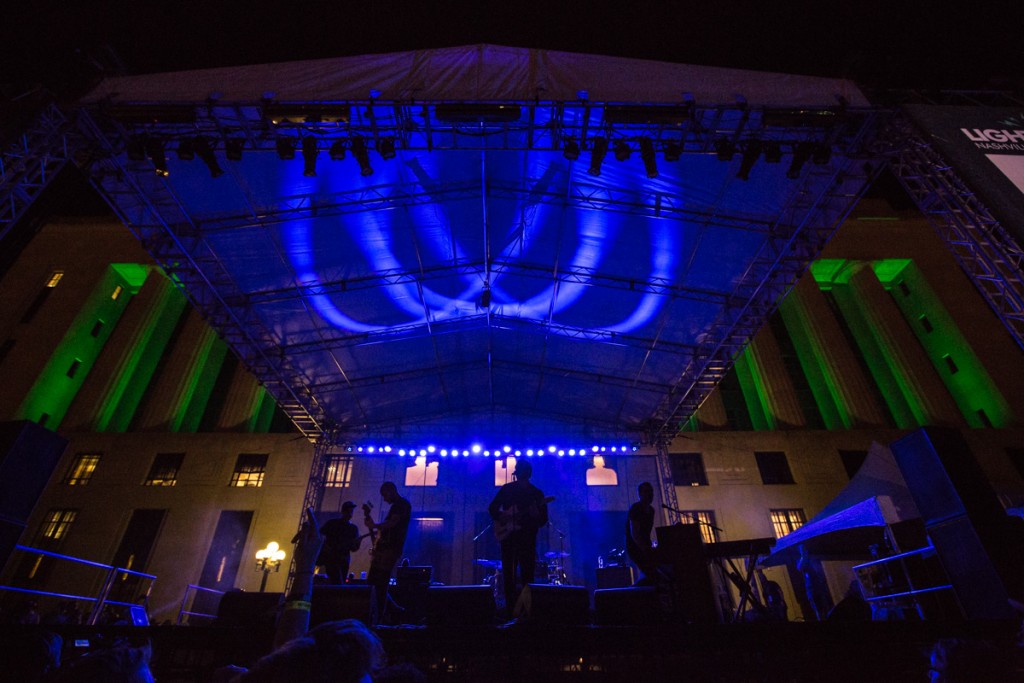 I’m not sure if it was a mistake at check-in or Live On The Green just helped a brother out (if so, thanks a bunch guys), but I ended up with an All Access Pass for this week’s event, which allowed me to get the obligatory Instagram crowd shot from the tower.  I made my way up the elevator, and found a spot along the railing right as Cold War Kids started.  However, I waited and waited for the front of stage lights to kick on to provide the proper lighting for my high altitude masterpiece.  After four songs with still no lighting, I gave up and descended back to the masses to find the rest of our team.  As I walked up to a bunch of photographers, there was grumbling about the lighting situation, and whether there was a malfunction or if that was an artist request.

Regardless, what our photos might be lacking for the headliners, the music was not.  I can still remember hearing Cold War Kids for the first time, and playing tracks like “We Used To Vacation” and “Hang Me Up To Dry” on repeat on my iPod (I actually had to stop and think about what that little device was called for a minute).  The debut album, Robbers & Cowards, which garnered the band considerable acclaim, really struck a cord with me back in 2007.  It’s tough, reflective lyrics seemed to soothe what, I can’t even remember now, was ailing me at the time, and will always remain a favorite album of the mid ’00s.  Working here at No Country, I’ve been in the loop on their continued releases and shows, and even spent some time at their set at Bonnaroo a few years ago. But, honestly, I just haven’t given their latest releases enough of a chance.  I was clearly in the minority last night at LOTG.  A seething sea of kids in their teens and twenties were pushing to get as close to the stage as possible, while singing along, pumping fists, crowd surfing and more.  While I let a bunch of these news tunes sink in, I found a perch along the backstage wall to watch this sea of happy humanity, and was once again reminded of why Live On The Green is such a beloved event in Nashville.

Head below for to catch our photos from the evening, while I go spend some time with the Cold War Kids recent catalogue.  And, mark your calendar for next week, when LOTG rolls on with Moon Taxi, The Delta Saints, and Greg Holden.  Head to the fest’s site for more details, and keep an eye out for our full preview.