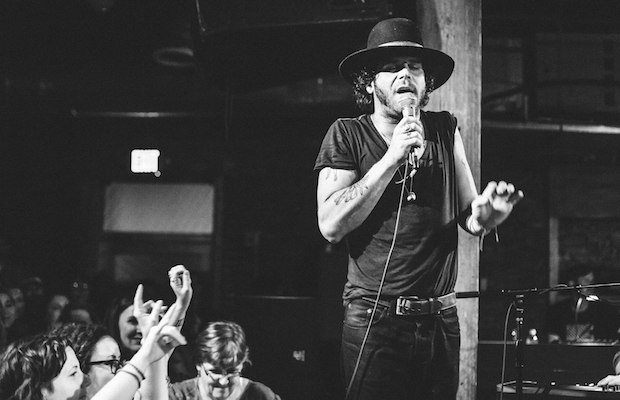 Surprising to almost no one, Langhorne Slim & The Law dazzled audiences Friday AND Saturday night last weekend at Mercy Lounge. The double show event was the last stop for his summer tour in support of The Spirit Moves, his new, love-soaked album that was released by Dualtone Music Group on Aug. 7. Langhorne described his new album as full of “dance songs,” with a few sensitive, slower tunes like “Wolves,” a top song pick that feels ripped out of Simon & Garfunkel’s songbook (and don’t worry, it’s danceable too!). Each evening of music had a different opener, Clear Plastic Masks (Fri) & Margo and the Pricetags (Sat), and No Country was there for both blow out performances. Read on after the jump for a full recap from two different writers, and some great photos from Jake Giles Netter.

Having lived in Nashville for over four years now, most would think I’d had the chance to catch local Langhorne Slim at least once or twice, but other than a solo gig he did for a “Beatles vs. The Stones” cover-tastic charity event at The Basement, I had yet to see the man do his thing live with his amazing backing band The Law. Of course, living in East Nashville, I’ve seen Slim around town, at the flea market or what-not, and I’ve certainly heard his music on the radio, but when I saw this mini residency on Mercy’s calendar a few months back, I knew I had to catch at least one night of the stand out, rowdy Americana, rock ’n’ roller.

As luck would have it, I’d drawn the Friday night showcase which featured Clear Plastic Masks in the warm-up slot. The New York transplants now call Nashville home, and are a band we’ve been covering for quite some time now; they seem to fir right in with the tight knit indie rock scene here in town. At different times, they have heavy Dr. Dog and Kings of Leon vibes, although they are somewhere in-between those two bands, as apposed to sounding just like carbon copies or either. Tall and lean frontman Andrew Katz did little standup comedy-esque bits in between two or three song sets, and was very funny. My favorite was a joke he made about wanting to pleasure himself before a show once, but opting to save it for after, while referencing a similar choice the pitcher, in the classic baseball comedy Bull Durham, made. My favorite track, of many standouts, was the sexually charged, garage jam heavy “Baby Come On.” One thing is for sure, CPM officially have my attention and they will be gaining some downloads from me in the near future. 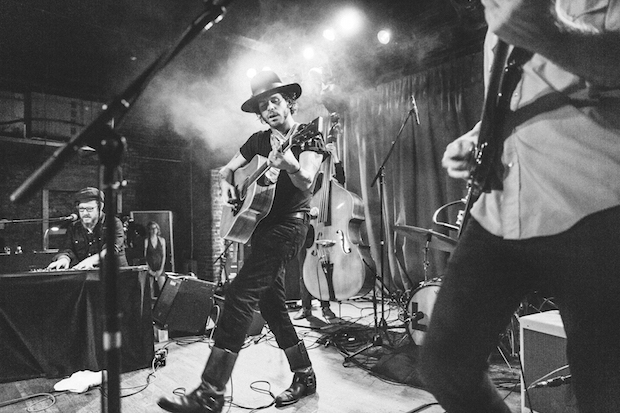 After a short break, it was time for the man of the hour. Langhorne Slim & The Law have been wandering all over the continent like nomads, bringing their very special brand of rock ’n’ roll with them everywhere they went, and I was super stoked to be part of the hometown crowd welcoming them back on night one of their two night stand. Even cooler than seeing one of the white whales on bucket-list of “to see” acts, was seeing another local musician I love, Ri¢hie, stepping in to play guitar with his buddies. Yes, the Music City love was in the air all night, as Slim and co. played a truly inspired and emotional show. The charismatic frontman’s mother and Grandma were also in the crowd, in form his native Pennsylvania, which made it feel even more homey in the near sold out venue. They played some of my favorite songs off the new record, as well as old favorites like “The Way We Move” and “Cinderella,” all the while Slim being Slim… writhing and dancing on sage, crawling down into the audience while singing, encouraging everyone to “come together and shake it a little bit.” All-in-all it was everything I knew it could be, and I am so happy to see some very hard working local peeps make good on huge potential. The sky seems to be the limit for this local artist, and I see even bigger things in their future; and that was only after night one! [Jacob Ryan] 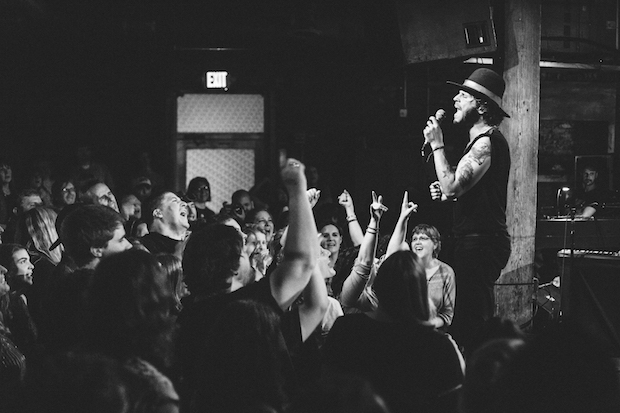 Margo Price of Margo and the Pricetags is not unlike Janis Joplin in her vocal style, but with less rasp and more Loretta Lynn sweetness. What did Loretta Lynn and, now, Margo Price have in common? These strong women cover their wounds with sweet songs that give a knee to the nuts of the men or industries whom hurt them, all while wrapped up in a dewy, innocent-seeming package. We at No Country understand the mix of country standards with “an alternative rock vibe.” It’s the same feeling you feel when entering The White Horse in Austin, Texas to see moto jacketed, leathered and bearded hipsters mixing with retired, Texas two-steppers. Margo and her band encapsulate that feeling perfectly to remind Nashville of its roots while fitting seamlessly into an alt club atmosphere. The Pricetags play with the excellence and timbre of the veteran session players that brought Music Row and this town to greatness. Margo combines her gorgeous twang with her spicy attitude in between songs, talking about the trials of making it in Nashville (she even wrote a song about it). This tattered, country jukebox sound is quite a departure from her work with Buffalo Clover, a lonesome sounding, reverb-filled local group. With one of the most purely talented voices on the scene and a pension for unearthing the past and painting a new face on it, Margo and the Pricetags are sure to set the scene afire with redheaded, late-night lounge, tongue-in-cheek attitude, and their opening set for night one of Langhorne Slim exemplified everything that we love about them. 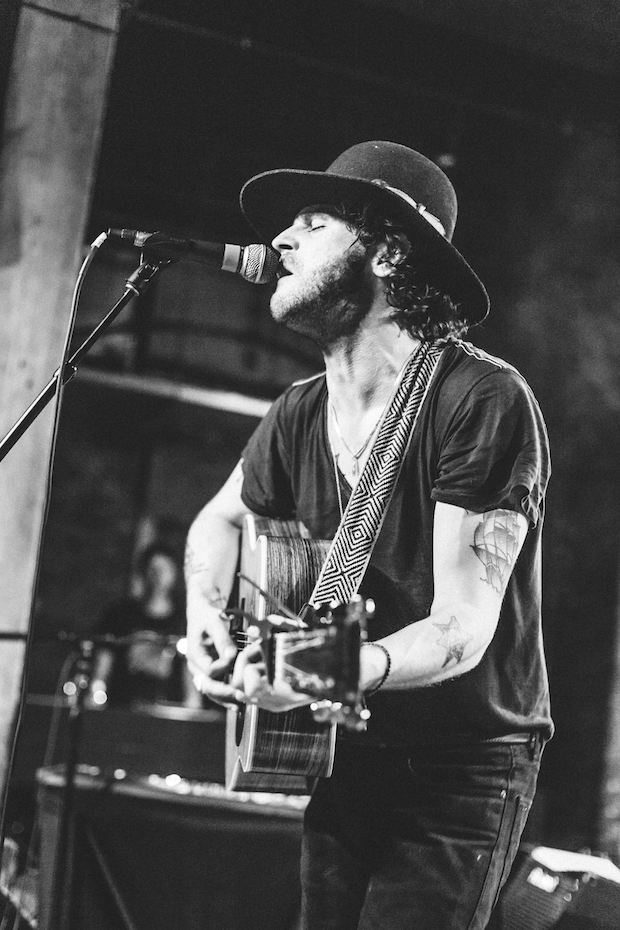 The lounge was packed at Mercy. Everyone was ready, whistling, hooting, hollering in anticipation of the headliner. Langhorne Slim is his name, but it’s hard to define his game. He reminds me of Cat Stevens on the new album, The Spirit Moves, but of Bob Dylan’s eccentricity and unpredictability in his live show. “It’s not the way it appears on the record ladies and gentlemen. That’s just for you motherf******. And, that’s a term of endearment,” said Langhorne. Trust, people, it was so much better. Langhorne sang alone for his first song of strange folk and then welcomed The Law, his band, onto the stage for the rest, until the encore that is. Langhorne says his new album is one full of “dance songs;” he implored the audience to shake their hands and feet. The crowd certainly did those things, with several drunk dudes next to me being entirely too loud. Their rude and unwanted noise finally came to a head when Langhorne said, “that really burns me,” after finishing a quieter number. He used this poetic vernacular in his songs and in his mini speeches between them, mentioning that sometimes you touch someone and it burns you and then you touch someone else and it feels like heaven (or something to that degree). Langhorne put the “Spirit” in spiritual with an irreverent sailor’s mouth (his guitarist even wore a captain’s hat, mustache, and sailor stripes to go with). He dressed a bit like Johnny Depp in Chocolat with the same free-spirited artist attitude, and played much faster live than on the album; maybe the people’s energies fuel him. The crowd lived for his banging and clanging and hyper speed guitar, as Langhorne played like he might die tomorrow, like he must give it all up now until he’s cross-eyed and passed out. Music is now his drug, and we were just all right with that. Dancing on the speaker, scowling and shaking his jowls with that hat, this guy was an actor. He’s a poet. He riled up the concert-goers like a black preacher on Sunday, giving them everything they ever wanted or needed. This might have been the best show I’ve seen in years. Slim “believes in the power of energy” and gives his testimony; he believes in music. At the end of the night, Langhorne Slim came out for a demanded encore and asked his mother to join him on stage. They sang a lovely song he wrote when he was young, and her voice was full of busker grit and was mighty pretty too. He takes after his momma.

These two shows’ attendance and vibrancy plus his Conan appearance all show the burgeoning appeal for Langhorne Slim & The Law. Buy his freshly minted new album, The Spirit Moves, here. [Olivia Burd]