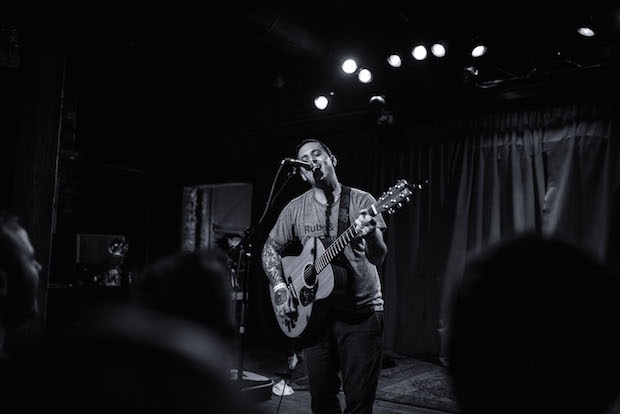 Last weekend, Bayside frontman Anthony Raneri played an intimate acoustic show in support of his new EP Sorry State of Mind at Mercy Lounge, his first “hometown” show since moving to Nashville, with openers Laura Stevenson and Allison Weiss. Everyone was solo, everything was acoustic, and there were plenty of feels to go around. Check out our full review and some great shots from Nolan Knight after the jump.

“I’m going to play you a bunch of songs about my life, and if you can relate to any of them, I’m extremely sorry,” joked Allison Weiss after a cold start with no introduction. She has a knack for anecdotes and told as many stories as she played songs. While she is often backed by a full band, this evening she manned the stage alone. Everyone did. The gear for the show (and probably the whole tour) was three acoustic guitars in hard cases and a case of bottled water. Meanwhile, the 500-cap room that is often nearly full held fifty people, maybe, and Ms. Weiss warmed everyone up to share their emotions. Her sound reverberated through Mercy Lounge as her warm raspy voice swam over her guitar on “I Was An Island,” giving it and most of her other songs a much more toned down, personal vibe than electric versions of her songs. She played a great set of seven insightful songs, one of which was a Robyn cover (“Call Your Girlfriend”) and another was a new song from her upcoming album which is set to release later this year on SideOneDummy. She closed with “Wait for Me,” an almost-swan song, and fitting for her last night of tour as she left the stage to make way for Laura Stevenson. 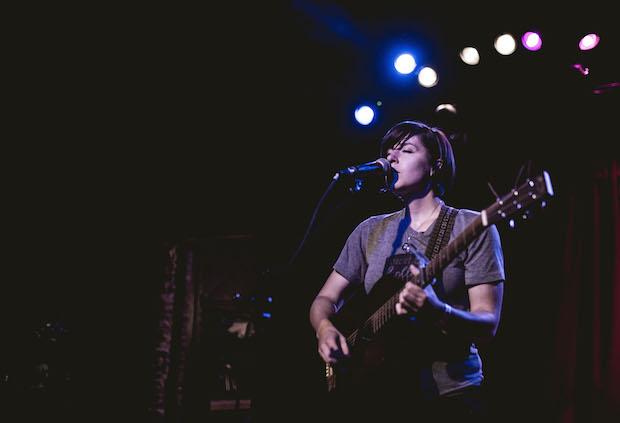 Maybe it was just my imagination, but it seemed like Laura Stevenson drew the largest crowd of the night. Whether she did or not, she certainly earned it. Another frontwoman normally backed by a full band, she played an 11-song set full of tunes haunting, beautiful and honest that would have seemed more fitting at a coffee house than a bar. The magic of an acoustic performance is that it is all content and no fluff. As someone who had never listened to Laura Stevenson before, it was the perfect way for her to gain a new fan. Her lack of confidence and shy smiles at the floor made her relatable and drew the crowd in, and then she played “The Move” and crushed our hearts as she wailed the crescendo and whispered, “I’ll leave it up to you.” But her set wasn’t all heartbreak. Stevenson played a lovely Archers of Loaf cover and closed her set out with “Montauk Monster” and “Barnacles.” She played an incredible set, and her understated prowess on the guitar is only slightly outshined by her playful, poetic lyricism and beautifully sweet voice. She left the stage with a set that seemed very hard to top. 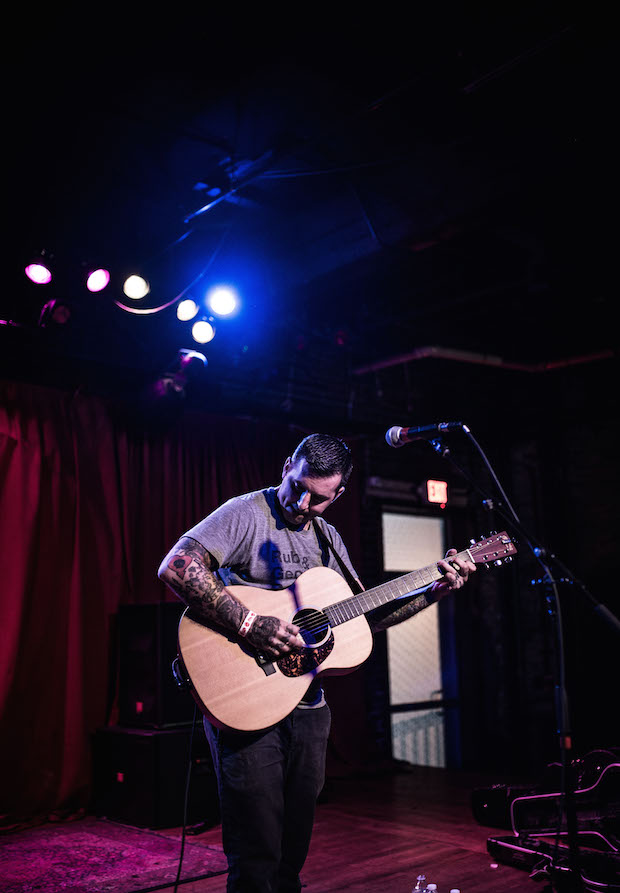 Trying to describe a show is like trying to explain a dream. It’s easy to recount the events, but almost impossible to portray it in a way that will make someone fully understand how it felt to be there. Because it seems pretty straight forward: a guy stood on stage and played some songs. But it was much more than that, especially since it was Anthony Raneri. To say the least, his set was cathartic and heartwarming, it was reminiscent of life 1o years ago. And it was over an hour of great stories and all the Bayside songs everyone wanted to hear. Going in I knew it could go one of two ways: he would either play a bunch of crowd-pleasers (the best option), or he would only play new solo songs (the least-best option).  After opening with the title track from his most recent solo release and with much reverence from the crowd, he went straight into “Don’t Call Me Peanut,” which could only be heard over the stifled tears of joy from the crowd. After that, he just kept them coming. “Megan,”  “On Love, On Life,” and “Blame It On Bad Luck” were contenders for crowd favorites, and sprinkled among them were several cover songs and a couple cuts from his first solo release back in 2012. Toward the end of his set, Raneri brought Laura Stevenson back to the stage to talk for a moment and they performed a beautiful and sweet rendition of Kenny Loggins’ “Rainbow Connection,” as well as Death Cab For Cutie’s “I Will Follow You Into The Dark,” both of which rivaled their originals. He closed his set with “Landing Feet First,” and everything felt right with the world. It was easy to tell that everyone there had been a Bayside fan since Bayside was a thing, and that everyone held his songs very close to their hearts. It  reminded us of who we were then and what it took to get to today, and it seemed to be as cathartic for him as it was for us.