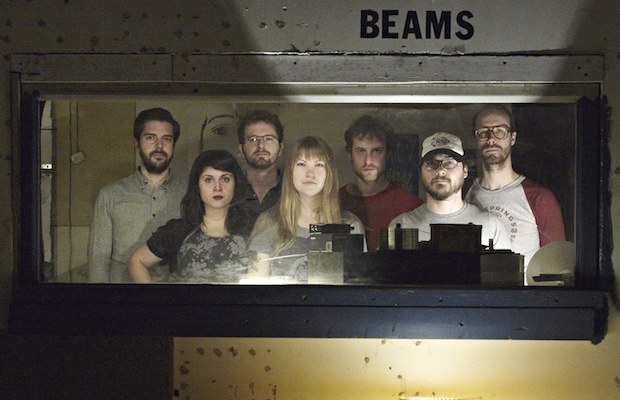 [UPDATE: Due a a border crossing issue, this show has been canceled.]

The massive seven-piece indie folk group Beams are from Toronto, but with mandolin, banjo, and lap steel in almost every song, they sound like they could be straight out of Nashville. Fronted by two female leads, the band present a modern interpretation of classic country and folk music with just a touch of blues and bluegrass. Brushed drums and minor harmonies sit atop massive atmospheres that sound like the theme song to a Western flick on “Be My Brother.” Fast and slow songs alike have a strong sense of drama; it feels fun like on tracks like “How Wonderful,” but there is a sense of unease in their minor chord progressions that, wonderfully, manages to be up-beat and unsettling at the same time. If you like quality country and folk music, Beams could be your next addiction.

THE BIRD AND THE BEAR

The Bird And The Bear are a folk/Americana duo from right here in Nashville whose classic country inspired sound is stripped down, raw, and just straight up sad. The voices of Garry Woods and Mirthe Bolhuis blend together like a smooth clear whiskey. Check out the heartbreaker “You Don’t Love Me (You’re Just Lonely)” below.

Lindsay Ellyn is a solo artist that, after years of playing shows in New York City, decided to bring her brand of country and folk music to Nashville. She just released her new EP, Out Of Road, and it is sweet and gentle like any solo project should be. Stream it below.