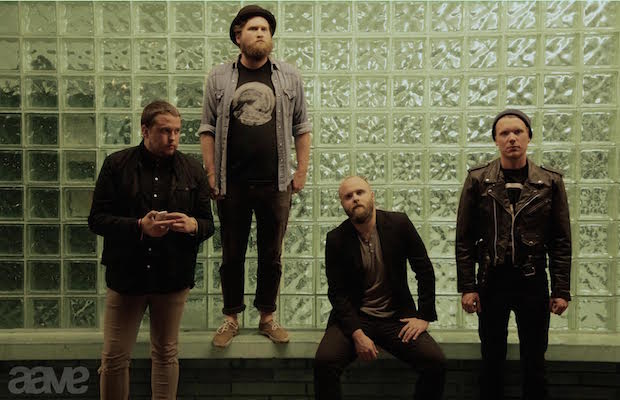 Nashville rockers aave are preparing for the release of their debut full length, There’s Nothing, on August 14th via Villian Place/Rock Ridge Music, and we’re proud to be premiering a new single, “Blender,” from that effort.  There’s Nothing is a follow up to the bands 2013 EP Sleep To Forget, and the new single is a high powered rock track that is sure to catch your attention with it’s pummeling percussion and soaring approach to dreamy post-rock.

Guitarist and vocalist Kyle Kelly says of the new single, “Two years ago the four of us walked into a 8’x6′ laundry room and began to play for the first time as a four-piece. We had all been in bands together in one form or the other, but this is the first time that we all came together and began writing for the next phase of aave. We didn’t have any pre-written material nor did we set any musical boundaries. What we played that night became “Blender,” the sixth track on our new record There’s Nothing. It is by far the most aggressive and upbeat song on the new record. The excitement and artistic freedom we felt in the room that night created an energy and the sonic by-product was ‘Blender.'”

Bassist Parrish follows up when asked about the album, “There’s Nothing as a whole is an extension of that first laundry room writing session from which “Blender” came. Though all the songs on the album don’t have the same feel as “Blender,” they all have the same ethos, which is that we got in a room together with a blank slate, and we just went with it…no preconceived notions, no baggage from past projects, and no limitations.  That event was a chance for something to take shape and for more writing/recording sessions to follow… or, conversely, for us to realize that this grouping as a quartet wasn’t going to work. Luckily, it worked out, and we were able to produce an album we’re all very proud of.”

Have a listen to the new single, “Blender,” below, and mark your calendar for their release show at The Crying Wolf on August 13th.