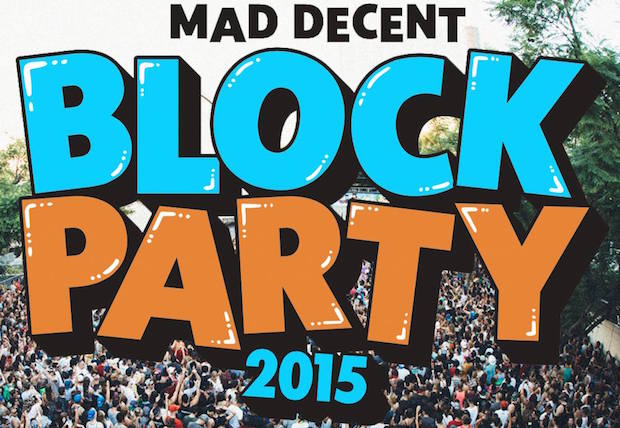 Last summer, the Mad Decent Block Party, a traveling hip hop/EDM fest helmed by Diplo’s Mad Decent label, expanded significantly, traveling all over North America with a rotating lineup of some of the scene’s hottest acts, including an inaugural stop in Nashville. We caught the show and had a blast, and, judging by the size of the crowd, we’re sure that many of you did as well! Following that successful run, the Block Party announced earlier this year that it’ll be traveling once again this summer, and will return to Music City on Aug. 28, this time at the Carl Black Chevy Woods Amphitheater (formerly the Woods at Fontanel). Subsequent lineup announcements revealed Major Lazer, Zeds Dead, RL Grime, and more to perform at the Nashville date, and tickets are still available to purchase right here. Or, if you’re feeling lucky, we’re also giving you the chance to win a pair, so enter below and keep reading for a preview of the entire lineup!

Hailing from Washington, DC and Richmond, VA, Gent & Jawns pairs successful DJ/producer duo Billy The Gent and Long Jawns for what has become a powerhouse collaboration in the EDM world. Their Diplo-helmed 2012 EP Express Yourself launched the duo’s career, while their top-notch production prowess, penchant for high-profile remixes, and electrifying live show has made them a standout on the Mad Decent roster.

Producer/DJ/remix artist Grandtheft, who is also one half of Toronto duo Team Canada, is one of the Great White North’s premiere club artists. With backing from the likes of Major Lazer, A-Trak, Flosstradamus, Zeds Dead, and more, he’s known for his infectious originals and high-profile remixes, many of which he’s recently teamed up with label boss Diplo to complete. Known for his over the top live show, Grandtheft is a definite can’t-miss for genre-bending club fans.

One of the many, many side projects Diplo has his hands in outside of solo prodution and DJ duties, Major Lazer have had a massive few years, and are probably the top reason the Mad Decent Block Party should be on your radar this year. Known for collaborating with an endless array of genre-spanning top artists, Major Lazer found breakout success following their 2013 sophomore effort, Free the Universe, and have managed to catapult their fame to even greater heights with this year’s Peace Is the Mission (propelled by mega hit “Lean On”). Combing elements of EDM, reggae, dancehall, pop, trap, and more, they offer endless crossover appeal and are sure to entertain EDM fans and pop fans alike.

Pulling heavily from elements of hip hop, trap, grime, and bass music, Los Angeles DJ/producer RL Grime has managed to find equal measures of attention from both the hip hop and EDM worlds. Born Henry Steinway and also known as Clockwork, Grime first garnered widespread attention after remixing Kanye West’s “Mercy” in 2012. Though he’s dropped countless remixes, a handful of EPs, and produced a few tracks since, his one and only full-length, Void, only dropped last year, and his presence seems only to be rising as a result.

Originally intended to be a duo alongside Flume, What So Not is now solely a musical outlet for Australian DJ/producer Emoh Instead. Drawing elements from house, hip hop, garage, and bass music, and employing the use of frequent guest vocalists and collaborators, What So Not channels a unique, hypnotic, and layered sound that is a little more subdued and introspective, but just as dance-ready, as his many contemporaries.

Based in Amsterdam, DJ/MC/production trio Yellow Claw are a powerful force in the European EDM scene, and have been steadily gaining buzz stateside since signing to Mad Decent in 2013. Made up of Bizzey, Jim Aasgier, and Nizzle, the Dutch group have managed to find a balance between compelling original tracks and popular remixes, flexing their ingrained talent to forge a trap-infused, hardstyle, dubstep, and hip hop inspired sound.

Breakout Toronto based DJ duo Zeds Dead have found runaway success, combining elements of electro house, hip hop, glitch, and drum and bass into their predominantly dubstep sound. 2012’s Adrenaline and 2013’s Hot Sauce both managed to crack the top 20 in both the Us Dance charts and Heatseekers charts, and their collaborations and remixes, with virtually every high-profile artist in the EDM world, have helped make them one of the scene’s hottest performers. If you’re looking to simply vibe out and dance, this is your artist.

Winner will be announced Friday, Aug. 7 at 5 p.m. CDT, and will receive one pair of tickets. Good luck!

Gent & Jawns, Grandtheft, Major Lazer, RL Grime, What So Not, Yellow Claw, and Zeds Dead will perform Friday, Aug. 28 at the Carl Black Chevy Woods Amphitheater for the Mad Decent Block Party. The show is 18+, begins at 3 p.m. (doors at 1:30 p.m.), and tickets are available for $49.