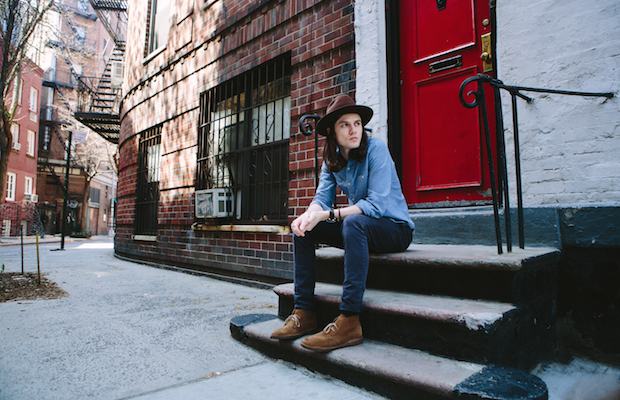 Though his global fame is relatively newfound, British singer-songwriter James Bay is no stranger to Nashville. Not only did he perform in Music City for the first time last fall, opening for a pair of Hozier shows at Exit/In on the cusp of Hozier’s own superstardom, but he also recorded his debut full-length, Chaos and the Calm, which was released in the spring to critical acclaim, here in town at Blackbird Studio with  producer Jacquire King. Returning for his first Music City headliner, Bay recently announced a July 27 show at Marathon Music Works. We hope you grabbed tickets when we first announced this show, because, much like Hozier, James is outgrowing venues as fast as he can book ’em. While tickets appear to be gone, at least for now, we’re still giving one lucky fan a chance to win a pair! Read on for details and enter below!

Hailing from Hitchin, Hertfordshire, England, James Bay developed an early love for music after hearing Eric Clapton’s “Layla” at only 11 years ago. After moving to Brighton to study at the Brighton Institute of Modern Music, Bay really developed his sound and honed his live show by performing the city’s open mic circuit, an exercise which also initially garnered interest from Republic Records. Discovered after a fan uploaded a video of one of his performances to YouTube, Bay quickly nabbed a lucrative major label record deal, and released a string of four EPs from mid-2013 to early 2015. The young singer, now just 24, found even broader success through his debut LP, Chaos in the Calm, in March, landing at #1 in the British charts and cracking the top 20 in the U.S. Combining indie pop, folk, soul, and alternative, James Bay is on an inevitable path to superstardom, and, if peers like Hozier are any indication, it would be unwise to bet against him.

Winner will be announced Thursday, July 2 at 3 p.m. CDT, and will receive one pair of tickets. Good luck!