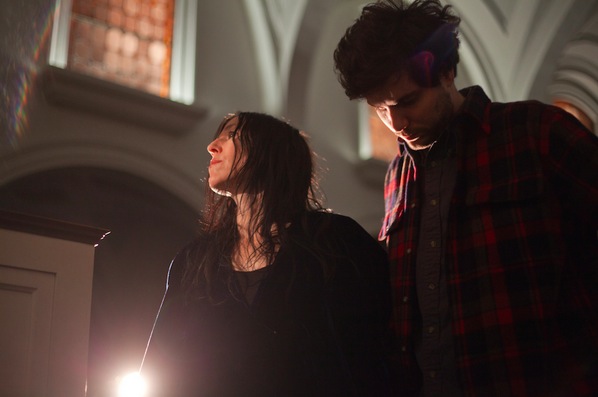 If you’re looking for a night to get spaced-out in a dark way, tonight The Stone Fox is featuring three ambient acts influenced by various offshoots of psychedelia that cite different genres with “gaze” as the suffix when asked to describe themselves. Shana Falana is earning tons of buzz in the shoegaze/psychedelic scene for the New York-based duo’s debut album, which introduces the world to a charismatic new frontwoman of the same name, as well as employs messages not often found in the genre in which the band works. Basically you can just space out to Shana Falana’s low-fi dream pop, but they are doing interesting enough that things you might want to actually look up and pay attention. Opening for them are two local psych acts, the symphonic The Ascent of Everest, which employs lots of strings and tons of members, and Ttotals, the “outer blues duo” that take the opposite approach by paring everything back to just drums and guitar. Fans of psychedelic and its contemporary iterations won’t want to miss this.

Head below for more about this not to miss Tuesday night at The Stone Fox.

Shana Falana is the name of the girl and the name of the band. She is a Kingston, New York based veteran of the low-fi dream pop scene, having toured all over the U.S. and Europe alone before teaming up with creative partner Mike Amari to give new life to her songs. The result is the band’s recently released debut album, Set Your Lightning Fire Free, which was recorded in a little over a week — at lightning pace one might say. The single “Go” shows just how aggressive Shana Falana’s dream pop can be, skewing almost towards late Nineties alternative. Falana’s eclectic influences include everything from the Bulgarian women’s choir she was in for awhile to pretty ambiance to sludge rock, and she’s attempted to combine it all on this album, which has gotten great reviews.

THE ASCENT OF EVEREST

The Ascent of Everest are a local post-modern psychedelic band that feature a big revolving cast of members. The group is heavy on the strings, and could be described as something like a psych rock orchestra, though they choose to describe themselves as “symphonic post-psych doomgaze.” They’ve been featured in film scores, and have toured in the U.S. and Europe.  However, they’ve been quiet for a little bit, spurring hope that these upcoming shows will mean some new music.

Psychedelic band Ttotals refer to themselves as “Nashville’s outer blues duo.” They released their first full-length album, Let Everything Come Through, in the fall. Their psychedelic rock and blues sets itself apart from the crowd of shoe-gazey indie bands for their minimalism, choosing to stick with just two people playing guitar and drums rather than piling on the guitars and effect pedals in a stoner frenzy.

Shana Falana, The Ascent of Everest, and Ttotals will perform Tuesday, May 12 at The Stone Fox. The show is 18+, begins at 9 p.m., and tickets are available for $7 at the door.