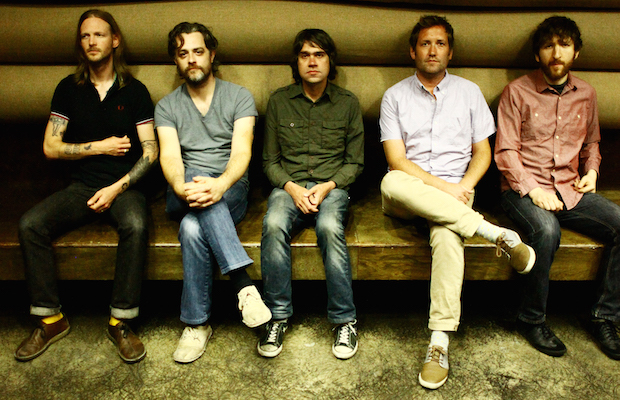 Ahead of their outing at Atlanta’s Shaky Knees Festival, Seattle indie rockers Minus the Bear will perform a special Nashville set at 3rd & Lindsely this Saturday, May 9, in honor of the 10th anniversary of their famed 2005 sophomore release, Menos el Oso. We couldn’t be more thrilled about this one (if you haven’t listed to Menos, or haven’t revisited it lately, do so immediately; it still holds up!!!), and, along with opener Into It. Over It., who we’ve raved about on numerous occasions in the past, this might just be a number one weekend pick! Read on for a full preview and be sure to grab your tickets now!

Formed nearly 15 years ago, out of the ashes of metal band Botch, indie group Sharks Keeps Moving, and emo/post-hardcore band Kill Sadie, alt rock/indie outfit Minus the Bear, who intensified the mathy tendencies of all of its members prior projects, combining elements of electronics and pop sensibilities with unorthodox rhythmic structure, have become a staple of the indie rock scene. Though their last proper full-length, Infinity Overhead, came out nearly three years ago, the band have since dropped an acoustic LP and a new collection of rarities, and spent a portion of last year touring in support of the 10th anniversary of their fan favorite 2004 EP, They Make Beer Commercials Like This. En route to this weekend’s Shaky Knees Festival in Atlanta, the Seattle band, who parted ways with longtime drummer Erin Tate earlier this year, have announced something extra special: an anniversary show for their beloved 2005 sophomore LP, Menos el Oso. Largely the release that put them on the map, Menos serves as a critical turning point for the group and a template for everything that followed; the most cohesive and consistent release in their catalogue, and often still regarded as their best LP, containing classics like “Pachuca Sunrise,” “The Game Needed Me,” “The Fix,” and “Memphis & 53rd.” Witnessing the album played in full will be an absolutely unparalleled experience, and one you will definitely not want to miss- longtime fan or newcomer.

Chicago’s Into It. Over It., the musical vehicle of Evan Weiss, channel elements of the classic midwestern emo scene, co-opting its best aesthetics, and repackaging them into something entirely new, modern, and progressive – paying homage to what has come before, but not limiting himself to simply being an emo revivalist. Drawing heavily from his midwestern roots (Cap’n Jazz, Braid, and The Promise Ring would be proud), Evan even shares a side project, Their/They’re/There, with emo forefather Mike Kinsella. Even-handedly channeling math rock, indie rock, and pop punk influences, Into It. Over It.’s latest effort, Intersections is above and beyond anything the band have previously released. Weiss juxtaposes heartfelt, melodic sentiments with unconventional time signatures, rhythmic choices, and textural palettes, often bordering on tastefully abrasive. While the “return of emo” discussion at large will continue until the scene smacks the music press in the face, the recognition from sources like SPIN, Pitchfork, and The A.V. Club (and contonued support from the likes of Alternative Press and AbsolutePunk) that IIOI have been recently receiving, further reinforces what we’ve wholeheartedly trumpeting: emo is finally receiving well-deserved attention once more, and Evan Weiss is the most likely (and most fully deserving) candidate to be at the forefront of the scene.