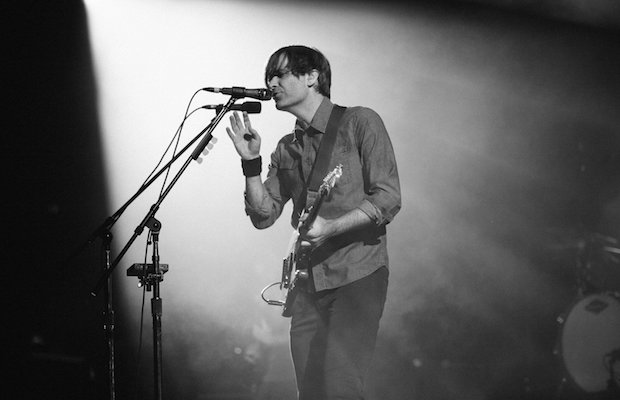 According to Wikipedia, “kintsugi” is described as “the Japanese art of fixing broken pottery with lacquer dusted or mixed with powdered gold, silver, or platinum. As a philosophy it treats breakage and repair as part of the history of an object, rather than something to disguise; an embracing of the flawed or imperfect.” Death Cab For Cutie‘s eighth album, named after that art and philosophy, could not be more aptly titled. Nearly twenty years into their career, the Bellingham, Washington band, who really exploded onto the national scene with 2003’s Transatlanticism, are at their most transitional. Ahead of Kintsugi, it was announced that guitarist, founding member, and longtime producer Chris Walla would be amicably departing, and, while he did stick around to assist with writing and recording the band’s new LP, he handed off production duties, for the first time in the band’s history, to the more than capable Rich Costey. The result is, perhaps, the group’s best album since Plans. In concert, Death Cab, now a trio, have added a live guitarist and a keyboardist to fill Walla’s shoes, and we caught their return to The Ryman, for the first time in three years, the witness this pivotal moment of a celebrated band embarking on a distinctly new chapter. The Antlers were hand selected to support, and you can read all about it (and check out some incredible photos) below! 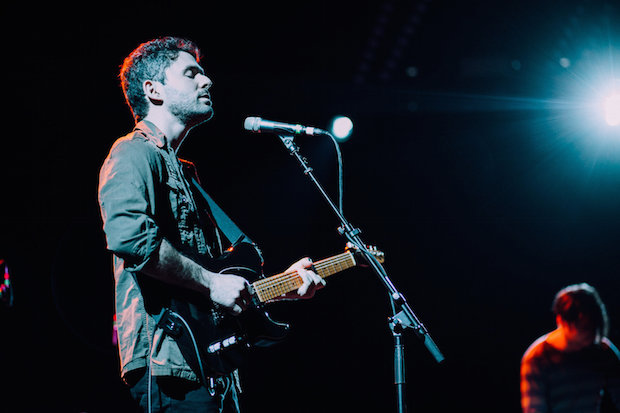 The Antlers. Photo by Emilia Paré.

Hailing from Brooklyn, The Antlers blur the line between indie rock, dream pop, and folk. Though they obviously draw heavy influence from Death Cab, especially early and mid-period releases, they funnel that ambient, melodic, and drawn out approach into something a little more modern and unhinged. Their Ryman debut was my first chance seeing them, and, as an off and on casual fan for quite a few years now, it was such a treat. To call the group’s set hypnotic would be an understatement; it was simply so well orchestrated, lush, and enchanting, that, even with its chilled out, somber structure, the trio’s compositions managed to captivate the room. Though, normally, I understand that they make use of a variety of instruments and backing players, this show simply boasted The Antlers’ core three members, relying heavily on Darby Cicci’s impressive synth skills to flesh out their sound. Frontman Peter Silberman was as skillful as he was humble, repeatedly thanking the crowd and expressing his awe at performing The Ryman, between bouts of deeply emotional, chillingly raw songs. Death Cab’s Ben Gibbard has raved about The Antlers more than once in interviews, and it’s clear why he’s such a fan; by the end of their all too short set, my anticipation for the melodic density and energetic build of Death Cab was at an all-time high. 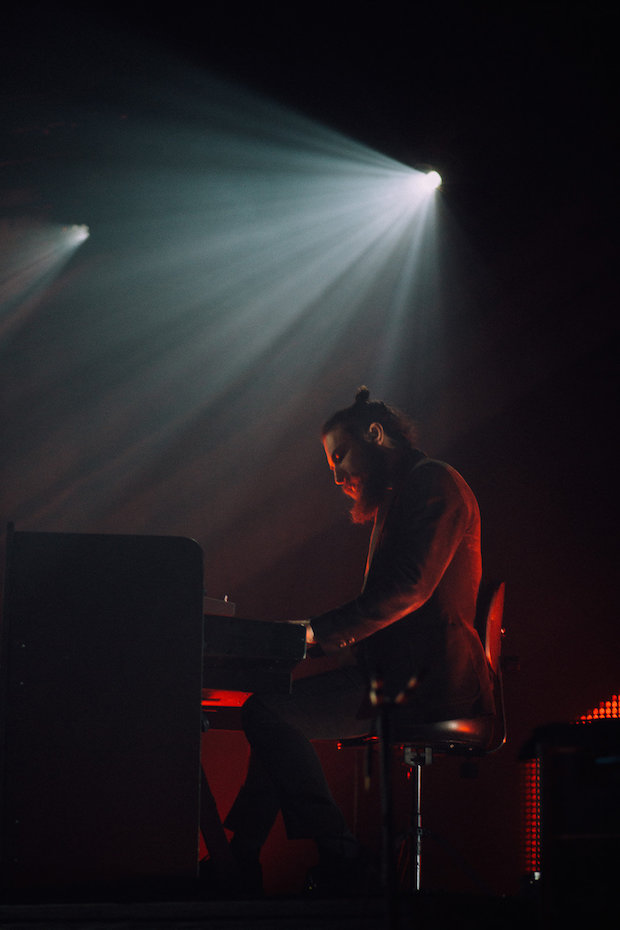 Entering the venue earlier in the evening, I was surprised to see no less than three semi-trucks out front; definitely a rarity at the mid-sized Ryman. While I couldn’t quite tell exactly what all they housed, Death Cab’s production was unreal; with a subtle yet massive background and huge, extra columns of lighting arrays mounted all over. Stepping onto stage without a ton of fanfare, the group boldly launched into new tune “No Room in Frame,” before really grabbing the crowd with fan favorite “Crooked Teeth.” The participation level of The Ryman audience can be hit or miss, especially since the venue is entirely seated, but, at Gibbard’s instance, everyone soon jumped to their feet, and the energy intensified accordingly. Unsurprisingly, most of the evening’s set came from Kintsugi; not only is it brand new, but it also both bookends and kickstarts this new path for the group, and allows them to present new songs in a new way with a clean slate. The hits certainly weren’t ignored, though, with several selections from Transatlanticism, Plans, Narrow Stairs, and Codes and Keys making the cut. For the old school and superfans, the band managed also to sneak in some classics, like “President of What?” (which Ben introduced as being from their “first tape,” before expressing his amusement about renewed interested in cassettes), “A Movie Script Ending,” and lesser-known EP tracks “Photobooth” and “Little Bribes.” 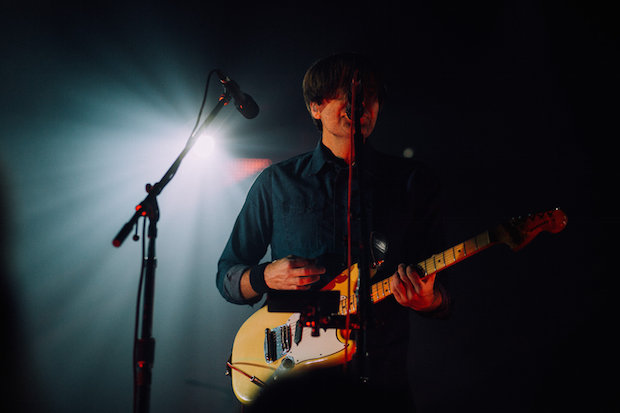 This marked my third time seeing the band over the span of a decade, and, while Walla’s presence was certainly missed, it wasn’t too noticeably felt. Talented new recruits Dave Depper and Zac Rae held their own, and, by splitting extra guitar and keyboard duties between two people, actually helped add layers and nuance to sounds in a more complete way. Of course, the tried and true rhythm section of Nick Harmer and Jason McGerr have long been the band’s most overlooked asset, and their seamless, automatic ability to lock into the groove and give the songs legs provides the perfect backing for Ben’s knack for sparsity and emotional vulnerability. Death Cab are, without a doubt, certifiable rock stars, and while their performance is so well-polished it’s basically automatic, the heart that drives them, and that struck a chord so heavily with the indie scene that it elevated them into the mainstream, has never faded. If anything, the band, whose use of intense lights, strategically planned setlists, and sincere, humble attitudes, are playing with a refreshed and renewed focus, plunging into untested territory with unfailing optimism.

High points of the set included a reworked version of the song that put them on the map, “Title and Registration” (that was certainly my personal introduction to Death Cab), sparse and dismal new tune “You’ve Haunted Me All My Life,” arena ready banger “The New Year,” the haunting “Cath…” (which featured my favorite light show of the night), and set closer and Kintsugi lead single “I Will Possess Your Heart.” Ahead of a generous four song encore, Gibbard half-jokingly asked if anyone knew Kenny Chesney, and mentioned that he felt that the next song (“I Will Follow You Into the Dark”) would be primed for a high-profile cover (“indie rock’s not what it used to be, and Jason has kids to put through college”). The encore and the evening ended with one of my personal favorites, “Transatlanticism,” returning Ben to his underused post at the piano, before slowing stepping back to guitar as the song’s momentum built; with “I need you so much closer” hauntingly and solemnly burned into my brain, I, and undoubtedly the majority of those in attendance, left feeling a mix of nostalgia, contentment, and with so much faith in the future of Death Cab For Cutie.

No Room in Frame
Crooked Teeth
Photobooth
Doors Unlocked and Open
The Ghosts of Beverly Drive
Title and Registration
Black Sun
Little Wanderer
Little Bribes
President of What?
You’ve Haunted Me All My Life
What Sarah Said
Everything’s a Ceiling
You Are a Tourist
The New Year
Cath…
Soul Meets Body
I Will Possess Your Heart