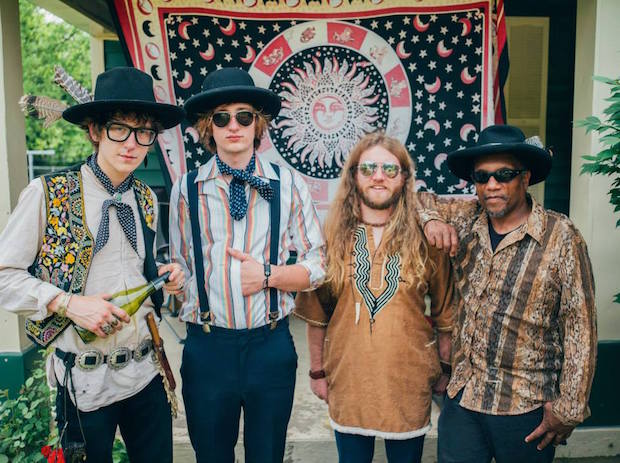 Get ready for a celebration, and a damn heady rock ’n’ roll line up, TONIGHT, April 17 at The Basement. It’s the official hometown LP release show for Blackfoot Gypsies’ latest, Handle It, from local label Plowboy Records. Equally awesome, label-head and punk rock guitar legend, Cheetah Chrome will be in the house, and also putting it down for your pure unadulterated enjoyment. Shane Tutmarc fills out a ridiculously heavy hitting bill that needs to be part of your Friday night. It will only cost you $7 at the door to get in, but read on if you still need more info, and we hope to see you there to celebrate/support local music.

In addition to being long time friends of No Country, Blackfoot Gypsies are one of the best local bands in the Music City rock ’n’ roll scene that we’re so fond of telling you all about. A wonderful mix of southern rock sounds, blues guitar, and harmonica that reminds us of honky tonk era Rolling Stones. Frontman and lead guitarist Matthew Paige is charisma personified, and together with his bandmates, they always put on one hell of a show. It’s already been a busy year for BFG, signing with local indie label Plowboy Records, playing showcases at SXSW, and now releasing their latest record, Handle It. We recently talked to two of the Gypsies (read this post) about their increased momentum, but you can see what we’re all hot and bothered by for yourself tonight when they shred and celebrate their new release!

Legendary punk/garage rock guitarist Cheetah Chrome (see The Dead Boys or Rocket from the Tomb) has been calling Nashville home since the ‘90s, and, in addition to being label-head at Plowboy Records, he also makes some time to rock the fuck out now and again. Anytime he steps on stage and plugs in, you’re in for something special, so make sure you’re there for all the music because it’s gonna get nuts.

Local, via Seattle, rock n’ roller Shane Tutmarc first caught our attention with the release of his singles, “Poison Apple” and “Tennessee Girl”.  We also premiered the video for “Poison Apple” about a month ago.  If you haven’t gotten in the know on Tutmarc yet, check out the video below that was filmed at Fran’s East Side below, and make sure you get to The Basement in time to catch his set to start off the night.

Blackfoot Gypsies, Cheetah Chrome, and Shane Tutmarc will perform TONIGHT at The Basement. The show begins at 9 pm (doors at 8), and tickets are available for $7.

[Premiere] The Harmaleighs Drop Video For "Hesitate" | Catch Them At Acme On Tuesday!