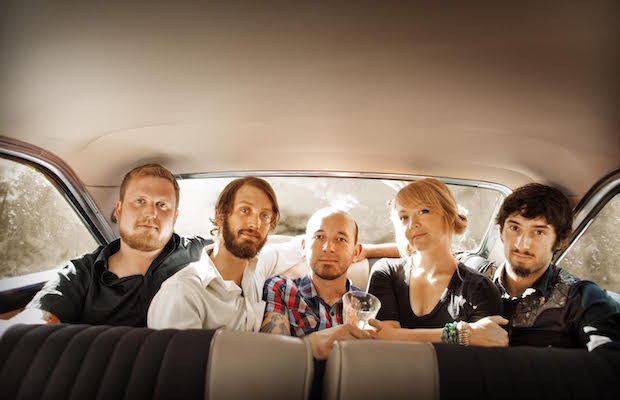 It’s only fitting that this show at Mercy Lounge falls on Friday the 13th. Bloomington, IN natives Murder By Death have built their 15-year career on the being the goth-iest band on the bill, and have seven albums and a rabidly dedicated fanbase to show for it (they were practically a household name for any Midwestern kid growing up in the mid-aughts). Opening up are Brooklyn-based punkgrass (or freak Americana, take your pick) outfit and recurring tour mates O’Death, who will be adding another delicious shade of macabre to this particular Black Friday. Doors for the show are at 8:30 p.m., music starts at 9 p.m., and tickets are $15. Read on for more info on the lineup.

Murder By Death are just as known for their noirish slant on punk, western, folk, and pub songs as they are for their relentlessly DIY business model (they hold the record for third highest Kickstarter fundraiser for their previous album Bitter Drink, Bitter Moon). The band are currently on the road in support of their seventh album, Big Dark Love (released Feb. 2 via Bloodshot Records), which continues their tradition of literary songwriting and overarching theme by focusing on the myriad, sometimes terrifying facets of, you guessed it, love. The band skirts new sonic territory in this release, introducing synth which, at times, almost toes New Wave, but signatures such as vocalist Adam Turla’s baritone and Sara Balliet’s cello contributions remain firmly rooted. Check out their latest single, “Send Me Home,” below, to get a feel for a band that count whiskey and the Devil as unofficial members.

Playing traditional music in a severely nontraditional manner, O’Death have been cultivating their eclectic style since their origins as students in New York over a decade ago. The band utilize banjo, ukulele, fiddle and raw punk-rock energy to hash out their chaotic, genre-hopping music (few groups can nestle bluegrass, ragtime and hardcore comfortably into one track). Their 2014 Northern Spy release, Out of Hands We Go, is significantly more subdued than previous records, offering a grave landscape for a listener’s cautious exploration. Why the trepidation? Watch this video for “Roam,” and figure it out.