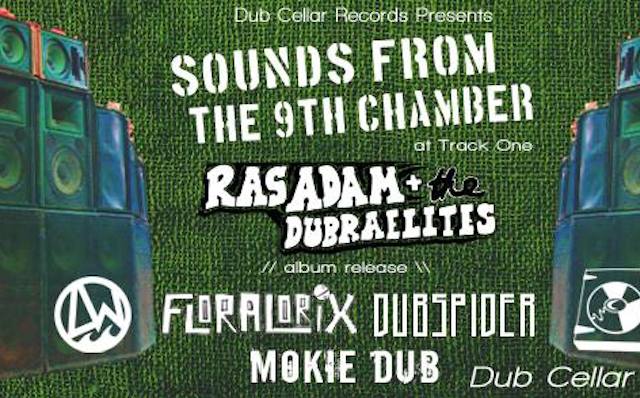 Here at No Country, we strive to give publicity to some of Nashville’s more interesting music projects, especially when they’re a part of a genre that doesn’t usually get much love around Music City. With that in mind, we’d like to fill you in on a killer reggae show Saturday, Jan. 31. Put together by local reggae label Dub Cellar Records, the show (called Sounds from the 9th Chamber) features Ras Adam & the Dubraelites, Floralorix, Dubspider, and Mokie Dub. The show will take place at Track One, a recording studio down the street from Greer Stadium. Things kick off at 8 p.m. and it’s free to the public (if you’re 18+). Check out the event’s Facebook page for more information about the location or to RSVP.

Though the bill should be enough to get you excited, there’s more. This event marks a milestone in the Nashville reggae scene and in many of the band’s personal histories. To start with, Ras Adam & the Dubraelites will be releasing their debut full-length, Isaiah’s Highway. The show will also be the first ever live performance by Mokie Dub. Furthermore, it will be the inaugural event of a brand new venue space centered around Dub Cellar’s killer reggae sound stack, of which nothing similar exists in the state. We’ve talked to the guys over at Dub Cellar, and they’ve assured us that there will be numerous other surprises for attendees throughout the evening.

We’ve got a few words on each of the bands after the jump, but we’d like to take a moment to genuinely encourage our readers to come out to this event. For the bands, the record label, and the Nashville reggae scene as a whole, Sounds from the 9th Chamber will be a huge step in the right direction. Be sure to check it out for yourself, for free, tonight!

RAS ADAM AND THE DUBRAELITES

Though Ras Adam and the Dubraelites’ debut doesn’t drop until tomorrow, the eight-piece have already begun cultivating a devoted following. The group genuinely believe in the positive powers of reggae music and committed themselves to making the world a better place with their dutty vibes. So far, this group has been relatively quiet in terms of releases and new music, so the Sounds from the 9th Chamber event will help to introduce this act to new sets of fans. If you’re in the mood for some mind-blowing music, be sure to stick around for Ras Adams and the Dubraelites.

Many of readers are likely already familiar with Floralorix. This upbeat trio play what could best be described as “sunny reggae.” Their tunes sound like a sonic incarnation of the feeling of relaxing at some coastal bar while downing an adult beverage or two, and there’s little doubt that this escapist feeling has played a critical role in establishing Floralorix’s popularity. Fortunately, the trio also posses phenomenal music chops and effortlessly sink into heady grooves. Be ready to move those hips tomorrow when Floralorix take the stage.

Local dub collective Dubspider were one of the original groups on Dub Cellar Records, and, as a result, the band have had lots of time to hone their reggae skills. In stark contrast to much of the rest of the dub scene, Dubspider emphasize pure music made through analog gear and instruments.  The group juxtapose subtle harmonic changes and deep grooves to create an exhilarating and sophisticated musical product. This is definitely going to be one for the books!

Being that this is Mokie Dub‘s first ever public performance, very little is known about this reggae artist. In fact, Dub Cellar’s own Facebook page describes the act as “top secret and so mysterious that [we] don’t even know what’s going on with it.” However, doesn’t that make seeing them all the more appealing? Mokie Dub will be the evening’s first performer, so if you’re curious at what mind-boggling tunes this group will drop, be there at 8 sharp.