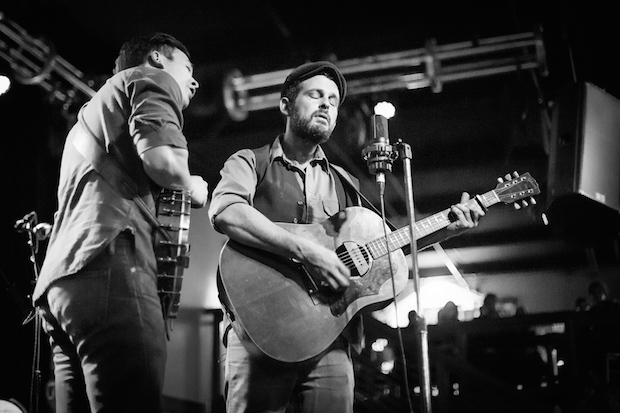 Wednesday at 3rd & Lindsley, indie-folk troubadour and king of chill Gregory Alan Isakov dropped in with Nathaniel Rateliff and created a magical night for all in attendance. Looking around the audience, we saw starry-eyed listeners, couples young and old holding hands, and the dim room felt as if it were lit by fireflies.

We’ve got the full review of Wednesday’s performance along with photos right here after the jump.

The best way to start a night at 3rd & Lindsley is by showing up two hours early to take your sweet time having a romance with the 3rd Ave. Angus Burger. This isn’t product placement, it’s just that necessary. We were surprised to see that the venue had cleared out most of its usual seating in front of the stage (save our favorite high table by the stairs). and the standing room didn’t start to fill in until about a half hour till the opener. 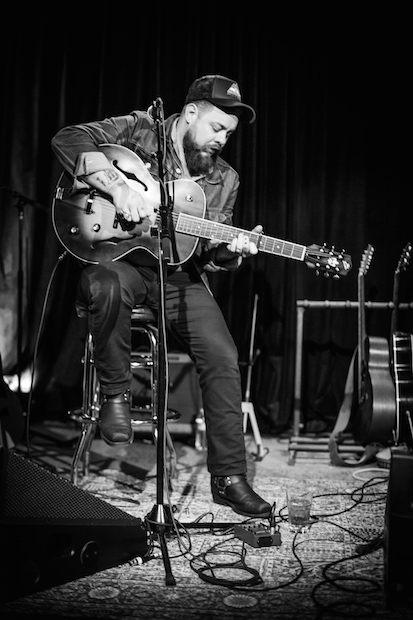 Nathaniel Rateliff is full of surprises. Dressed as a rock-and-roll trucker, he starts cracking jokes as soon as he reaches the microphone and spews friendly sarcasm at the audience about how his songs are so happy (cough cough) and that obviously everyone in the room knows his music (cough cough). We loved him immediately.

The endearing wise-ass sings from his gut through the corner of his mouth and has a voice that reminds us of Willy Mason, ranging from smooth murmurs to mountaintop wails. Rateliff strums his guitar with bare tattooed fingers giving his instrument a humming voice, and there’s something about his tunes that transports our imagination to 1800s campfire singing in the wild west.

Highlights in his setlist included “Don’t Get Too Close” and “I Am” from his 2013 album Falling Faster Than You Can Run. For the last song of his set and of the tour, Rateliff closed with the epic “Still Trying” during which the whole crowd became unified in singing “I don’t know a goddamned thing” with the implied and unsung (but it’s okay) attached. For now, Nathaniel Rateliff is headed off to Dublin but he advised us to check out his new R&B/Soul project with Richard Scott called Nathaniel Rateliff & The Night Sweats. 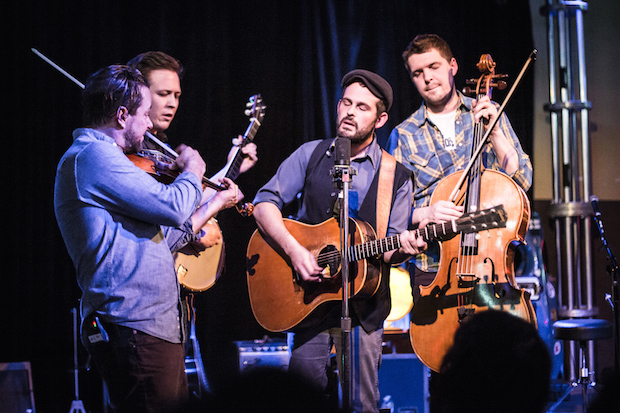 The lights dimmed and Gregory Alan Isakov took the stage in his signature vest and flat cap. He stood behind two microphones with different effects. One was as clear as being a cappella at the Ryman and the other was a muffled tin can kind of sound. Behind the traveling musician was a small globe illuminated gold from the inside. The band members backed Isakov with violin, cello, electric guitar, and drum kit.

We discovered early on that it was a kind of set-less room that night when Greg asked what we wanted to hear and would candidly make signals to the band. We watched the guitarist’s comical confusion as he put down his banjo for his electric before shaking his head and reaching for his banjo again. But all this improv was more than welcome to the audience, and we felt like we were part of a memorable night for everyone involved.

It was also a night of exploration. Much to every photographer’s horror, Isakov requested for all of the lights on the stage and on the audience to be turned off for his dreamy melody “The Universe.” It was an incredibly beautiful moment despite the woman next to us who expletively blew her nose during one of the most quiet parts. Another memorable extemporary moment was when the band crowded around a floor mic to sing the “oos” and “hums” behind Isakov during “Honey, It’s Alright.” Nathaniel Rateliff joined the somewhat awkward doo-wop quintet and Isakov teased and laughed that the band didn’t know what to do with their empty hands. 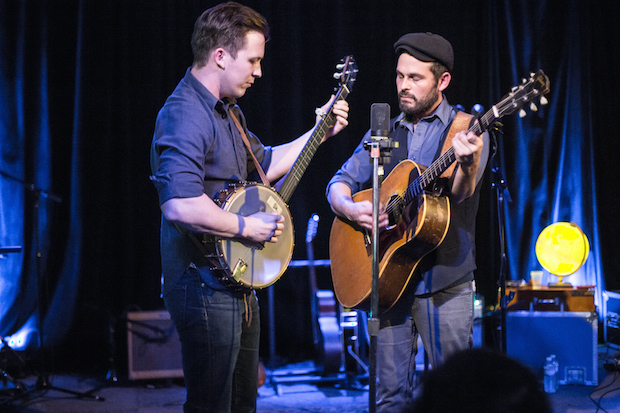 Isakov and banjo player Steve Varney came to the edge of the stage to play our old favorite “Stable Song” from 2007 album That Sea, The Gambler, and the shouted requests to hear “Big Black Car” were granted, but there was a tangible absence of the slow ballad “Master & A Hound”. However, we suspect that the sad song was appropriately left out of such a lighthearted night.

The two Colorado natives Gregory Alan Isakov and Nathaniel Rateliff returned to the stage together for the encore and played Rateliff’s “When Do You See”. As they were thinking of what to play next, they shrugged at the band and said “you want in on this one?” and rolled into an amicable cover of Leonard Cohen’s “Passing Through”.

High fives to everyone who joined us at 3rd & Lindsley and caught such a special night. If you missed it, Isakov’s tour will be going until March 5 ending in Denver Colorado. Maybe it will still be skiing season (hint hint). Until then, check out our gallery of photos from the show.