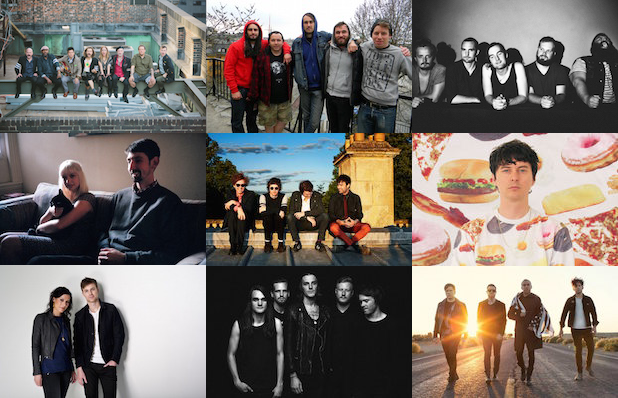 January is a HUGE month for show announcements. The holidays are long gone, spring is in sight (hey, we can dream), and tour schedules are lining up, which means we get to map out the next few months of our musical enjoyment. And, while we already filled you in on a bunch of major festival announcements, we also wanted to catch you up on some of the best concert announcements that have come on our radar over the last week or so. Below, you’ll find the scoop (and ticket links) on upcoming performances from Fall Out Boy, Matt & Kim, Panda Bear, Peter Hook, Gogol Bordello, and tons more!

Gypsy punks Gogol Bordello haven’t played Nashville proper in nearly six years, so it’ll be all the more sweet when they return to headline Marathon Music Works this March! Presumably, the New York band, who have been at it for over 15 years now, have a new album coming in the near future; it’s been a few years since their last, Pura Vida Conspiracy. Their live show is incredibly over the top in its energy and unpredictability, and is definitely something you want to experience at least once in your life!

The son of legendary Led Zeppelin drummer John Bonham (and the de facto fill-in for the group in their handful of reunions since his father’s passing), Jason Bonham is a talented percussionist in his own right, and, over the years, has played with a host of eclectic acts. For his latest tour, Bonham will be providing the “Led Zeppelin Experience,” performing the group’s classic debut and sophomore releases, along with some greatest hits. Sure, it’s not quite the same as seeing Bonham join the real remaining members of Led Zep for a jam sesh, but it should be pretty spectacular all the same (especially since Robert Plant has been pretty reluctant to perform with the band in recent years).

Post-hardcore act Pianos Become the Teeth are out in support of their fantastic 2014 release, Keep You, and, nabbing an impressive headliner at Exit/In, there’s never been a better time to catch them. Part of the emo-inspired, melodic wave of post-hardcore scene that has found a real stride over the last few years, with peers like Touche Amore, Make Do and Mend, and La Dispute, Pianos Become the Teeth benefit from their sincere songwriting style and vulnerable aggression. Don’t let this show fly under your radar!

Nashville folky/indie/soul rockers The Apache Relay had a huge 2014, with the release of their critically beloved self-titled album, tons of high profile performances (including many here in town), and more! And, while they easily could have opted for a well-deserved breather, the band are hitting the road once again to kick off 2015, and will play their first proper club-sized hometown headliner in awhile this spring at Exit/In. We’re not sure what the rest of the year will hold for Apache, so get your fix now!

This tour is as strange as it is awesome. Peter Hook, the bassist and backing vocalist for seminal post-rock act Joy Division, who went on to form New Order with his Joy Division bandmates following the suicide of singer Ian Curtis, is out with his new band, Peter Hook & The Light, which he formed after departing New Order in 2007. The group showcases Hook on lead vocals for the first time, and, for the most part, is an outlet to perform Joy Division and New Order covers. For their spring tour, they’re playing Joy Division’s two proper releases, Unknown Pleasures and Closer in full, and, while it’s only sort of like seeing Joy Division, critics and fans have given the experience a thumbs up.

Indie/emo/pop punk duo Tigers Jaw, whose 2014 release, Charmer, was perhaps one of last year’s most underrated records, have long been a staple of the new wave of underground, gimmick-free, gut-wrenchingly sincere punk bands who have crept up through basements and DIY spaces and into local scenes over the past few years. Paired with Lemuria and Somos, this show is a great example of the scene at its most relevant, and is definitely one spring event you don’t want to miss.

Admittedly, British indie rockers The Kooks managed to fall off of our radar a bit over the last few years. While they’ve popped up on the occasional festival bill, they haven’t played Nashville since 2007, and, until last year’s Listen, hadn’t released new music in over three years. 2015 seems to be a year of regeneration for the group, however. Listen is their strongest release in years, and, with newfound traction, they seem to be hitting the tour circuit hard, bringing along Joywave and Young Rising Sons for their upcoming Exit/In show. Get nostalgic for the ’00s and come rock out.

Best we can tell, Animal Collective co-founder and critically beloved experimental musician Panda Bear has never played Nashville as a solo artist, and that’s a shame, because his string of solo efforts over the years have been nothing short of incredible. Panda’s latest, Panda Bear Meets the Grim Reaper, dropped just last week, and, in celebration, he’s taking the show on the road, stopping at Exit/In on May 8. When he passes through with Animal Collective, it’s always a larger affair, so getting to see the singer in the relatively intimate space will be a real treat.

When last we saw infectious indie rock duo Matt & Kim, they were performing for us at Live on the Green in 2013. After a busy several years touring in support of their last album, Lightning, the husband/wife act are back with a new single, “Get It,” and news of a fifth album, New Glow, slated for release this year. If the single is any indication, Matt & Kim are exploring a bit more of a pop-accessible polish, but, one thing’s for sure: they’re one of the most fun and exhilarating live bands in existence, and their music is, without a doubt, best experienced live.

Whenever we see a quality all ages show (something Nashville is severely lacking), we’re always quick to plug it, and one with Tempe, AZ alt rockers The Maine is certainly a show worth a major mention. Though they’re unabashedly poppy and polished, The Maine have always had a knack for songwriting that sets them apart from their peers, letting influence beyond the pop scene seep in to create something special (the fact that they recorded their last album here in Nashville with Brendon Benson should tell you something). Backed by pop punk upstarts Real Friends and Knuckle Puck, along with indie rockers The Technicolors, this is shaping up to be one of our most-anticipated concerts of the spring, especially since The Maine have new music on the way.

Last but not least, pop punk turned pop rock group Fall Out Boy are prepping to drop their highly-anticipated new album, American Beauty/American Psycho, which marks an even deeper decent into alt-pop/arena rock terrain, and for the third time in two years (fourth, if you count a semi-secret show at Rocketown), they’re showing Nashville some tour love, with a July 12 stop at Bridgestone Arena. Co-headlining will be buzzworthy rapper Wiz Khalifa, which just points to FOB’s versatility at this point in their career, and supporting the show will be Hoodie Allen. Grab your tickets when they go on sale Friday, Jan. 23, at 12 p.m. CST, or on pre-sale Jan. 22 at 10 a.m. (we’ll have more details as they become available).