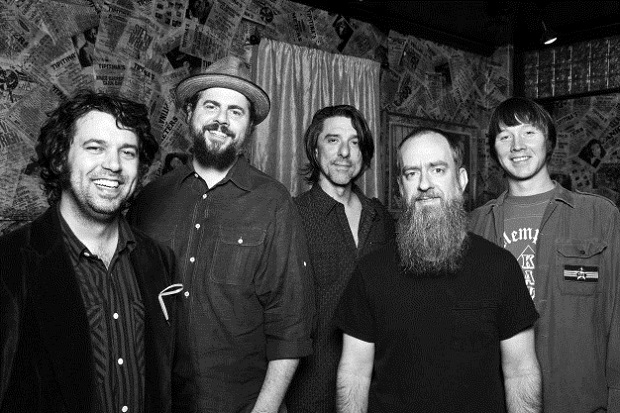 On the heels of  three sold out shows by one of their former members, the Drive-By Truckers will also be hitting the stage of of the Ryman Auditorium this week with Houndmouth opening the show.  We’re not predicting there will be any kind of a reunion at this show but…Jason Isbell does live here, it doesn’t look like he has another show and he did perform several DBT songs each night.  You will just have to show up to find out.

Houndmouth is an alternative country band formed in New Albany, Indiana during the summer of 2011 consisting of Matt Myers (guitar, vocals), Katie Toupin (keyboard, vocals), Zak Appleby (bass, vocals), and Shane Cody (drums, vocals).  After playing locally in Louisville and Indiana, they performed at the SXSW music festival in March 2012 to promote their homemade self-titled EP. The head of Rough Trade, Geoff Travis, was in the audience and soon after offered the band a contract.  Houndmouth ‘s 2013 album, From The Hills Below The City, was released by Rough Trade which led to performances on Letterman, Conan, World Cafe, and several major festivals including Americana Music Festival and Bonnaroo.  SPIN and Esquire.com named Houndmouth a “must-see” band at Lollapalooza, and Garden & Gun said, “You’d be hard pressed to find a more effortless, well-crafted mix of roots and rock this year than the debut album from this Louisville quartet”.

Drive-By Truckers are an alternative country/Southern rock band formed in 1996 in Athens, Georgia, though founding members Patterson Hood (Lead vocals, Guitar) and Mike Cooley (Lead vocals, Guitar) are originally from the Muscle Shoals area and the band strongly identifies with Alabama.  The band currently also includes Brad Morgan (Drums), Jay Gonzalez (Keys/Pedal steel) and Matt Patton (Bass guitar).   Tonight’s stop at The Ryman is in support of their 12th and latest album English Oceans, which was recorded last August at Chase Park Studios in Athens, Georgia, with longtime producer David Barbe, and marked the first time in four years that the Truckers had been in a studio.  “I had forgotten what a punk-rock outfit that shit was,” Cooley recently told Rolling Stone, discussing the rowdy four-piece band circa 1999. “The new record has kind of gone back to that simple sound. It sounds like a smaller band again”.  Cooley said he is excited about playing the new material live, where the band thrives. “We’re streamlined, we’re lean” he says, “and we’re enjoying the hell out of it”.

Drive-By Truckers with Houndmouth will perform Thursday, October 30 at The Ryman Auditorium. The show is all ages, begins at 7:30 pm (doors at 6:30 p.m.), and tickets are available for $31.