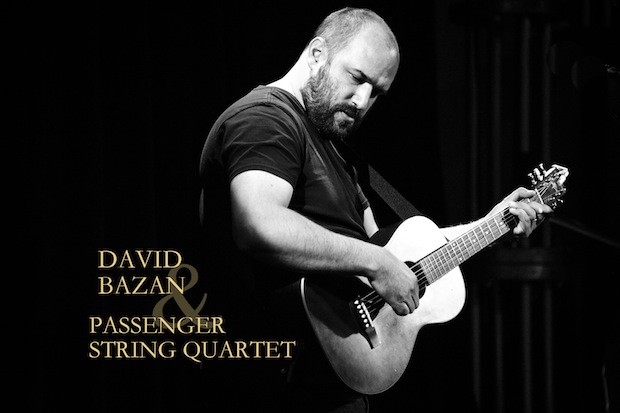 Last Wednesday evening at 3rd & Lindsely was one for history books. David Bazan has paired his deep and emotionally captivating tunes with the dazzling tones of Passenger String Quartet, and is touring with the legendary songwriter David Dondero. Bazan is known for his bitingly honest lyrics that spotlight his wounds and life questions, leaving his soul naked for all the world to see. We’ve been fighting off tears to his tunes for years now, and we should have known to bring an extra large box of tissues. David Bazan with a cello?  C’mon. It’s just not fair. We’ve got a full review of the set with photos and more details about Bazan’s heartfelt lyrics after the jump.

We walked into 3rd & Lindsley right as the doors opened at 6:00 PM sharp to grab our favorite corner spot, and as we walked up to the bar to check for Yazoo, we bumped into Mr. Bazan himself. One of the beauties of this venue is that musicians can be laid back before and after the show and don’t have to hide away backstage. You never know who you might get a beer with. After trying our best not to go all fan-girl on him, we offered a drink for a short interview. Even though he was too busy, he was very polite and offered to find us later. The tables slowly filled up, and everyone’s attention was quickly drawn to the opener as he strolled onto the stage. 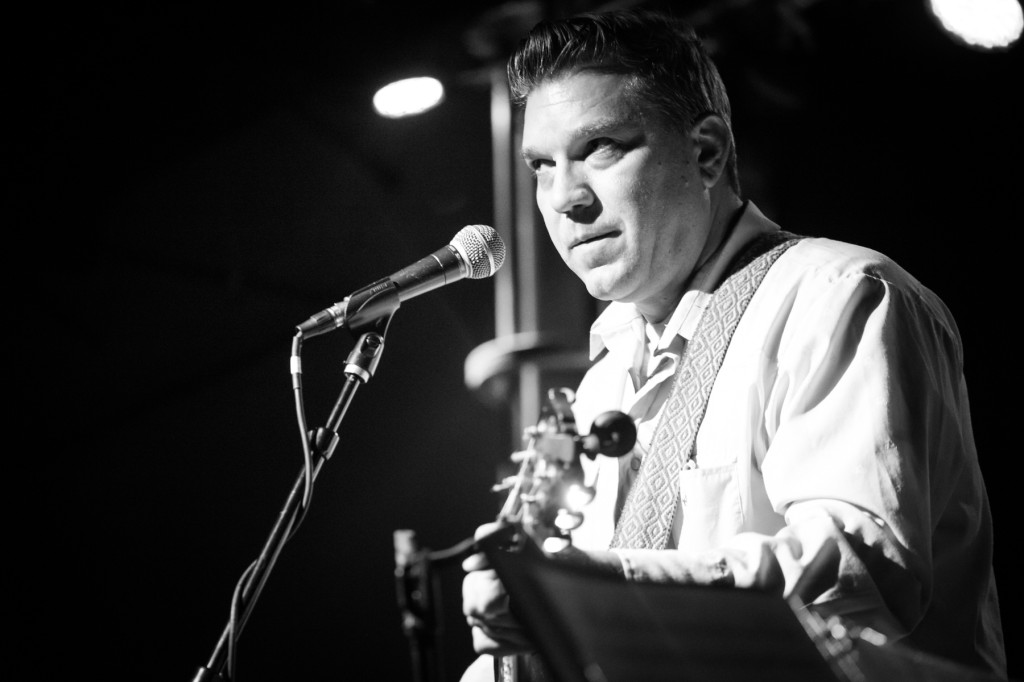 David Dondero is a singer/songwriter and Minnesota man and veteran of the music industry. He started his music career as a drummer way back in 1979, and you might remember him as the frontman from 90’s punk band Sunbrain. On stage, he is very casual and stands alone with his acoustic guitar while telling stories about the origin and meaning of his songs. In fact, his whole musical style is storytelling and he does it in a jovial kind of buddy-to-buddy way. In his voice, you hear a familiar distressed vibrato style that might remind you of Connor Oberst, but more accurately, it was David Dondero who most likely influenced Oberst.

Dondero played “This Guitar” where he describes his love/hate relationship with his instrument, and the title track from his 2005 album South of The South. Some other notable favorites included in the set were the hilarious “Not Everyone Loves Your Doggy Like You Do”, “Just A Baby In Your Momma’s Eyes”, and by request “The Stars In Our Chandalier”. Later in the night, David Bazan calls Dondero a “Prophet in the Earth’s long Chronicle” in reference to Cormac McCarthy’s The Road. David Dondero is a legend with many stories to tell. Be sure to look him up.

Enter David Bazan & Passenger String Quartet. Mr. Bazan and his companions stood in a semi-circle open to a wide eyed audience as they began their opening song “Hard To Be”. When their bows first touched the strings, we knew immediately that this would be one epic performance. To those who may not be familiar with David Bazan’s music,  let us explain some points of interest. Earlier in his career as Pedro the Lion, his lyrics often included some pro-Christianity vibes, but then he dropped an album back in 2009 titled Curse Your Branches that has been called his “breakup with God”. In fact, there are some songs that he won’t sing now because he disagrees with the lyrics that he wrote himself. For example, in his recorded album with Passenger String Quartet, he revisits his old song from 2004 “The Fleecing” and changes phrases like “still believe” to “don’t believe”. Bazan was raised in a Christian home and, in his adulthood, found that he no longer believed in the religion that his family taught him, and it is evident in his music that he has mourned his dead faith. His song “When We Fell” paints a bitterly honest picture of his story. 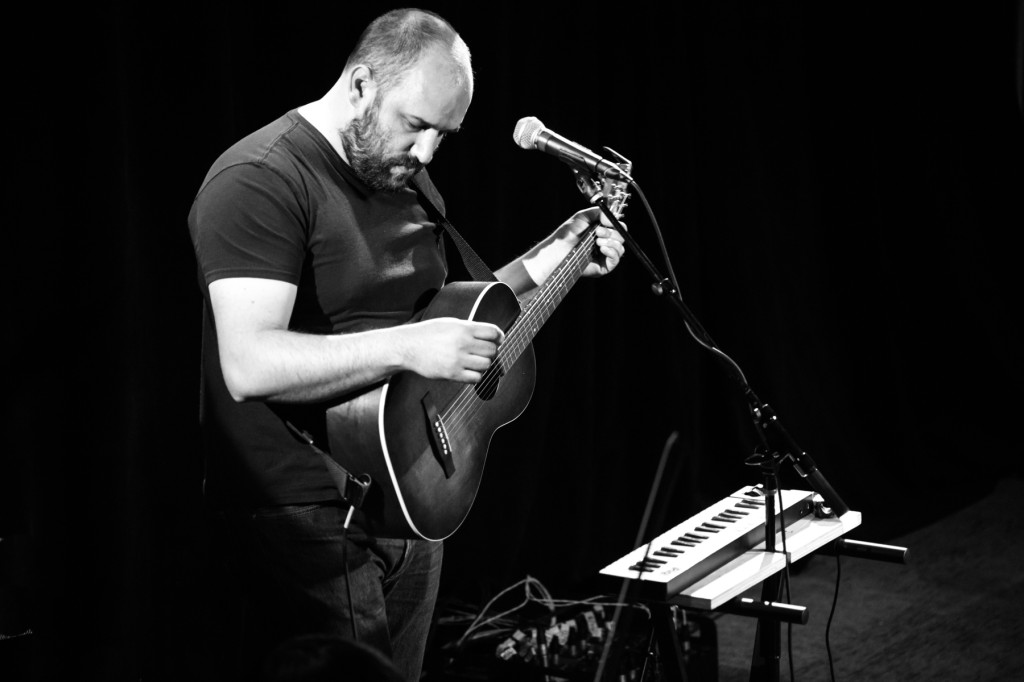 The Passenger String Quartet are a gang of superstar musicians that consist of two violins, a viola and a cello, and it is led by the immensely talented Andrew Joslyn who composes all the string accompaniment for Bazan’s original songs. PSQ are often hired as studio session musicians, but also tour with many other artists such as Macklemore and Ryan Lewis, Suzanne Vega, and Kris Orlowski. The quartet’s dynamics from plucks to furiously sawing at their violins artfully decorated the emotion in Bazan’s already beautiful songs.

In the set on Tuesday, he played a mix of songs from album Curse Your Branches and from his Bazan Monthly volumes: the complete album of David Bazan + Passenger String Quartet Vol. 1. Every month, Bazan writes two songs and uploads them to his website. Eventually he has enough tunes to make a volume. Currently, there are two Bazan Monthly volumes and, according to Bazan, there will be two more to come. Even more exciting is that there will be 10 more songs posted this week!

After every song, the audience responded with raucous applause and, every now and then, David Bazan would ask, “Does anyone have any questions?” We would hear shouts from the tables cordially asking about what his wife thinks about his tunes or about his concern that his guitar makes him look fat, but later in the set a man turned the awkward dial up to eleven when he said “I heard you’ve got problems with Hell. What if God doesn’t want us to go there, but it’s out of love that He gives us that choice?” We held our breath as we waited for his response and noted that half of the crowd looked like they wanted to rip the questioner a new one, but to our surprise Bazan replied with respect (for the most part) and said that he thinks that the world would be a better place without the notion of Hell; that people should be good to each other (and decide what they believe) for reasons other than where their actions/beliefs will send them when they die. However, he did end his discussion by semi-gently encouraging the questioner to really think about the concept of Hell; that it was “crazy”, and to “be real, dude. Get your head out of your ass.”

Even though his audience consisted of differing opinions and religions, everyone was moved by his performance. A listener doesn’t have to agree with Bazan’s beliefs to appreciate the vulnerability in his songwriting (among many other things) that he shows us. It takes a brave man to stay true to his heart even when his own family may disagree, and sing about it for all the world to hear.