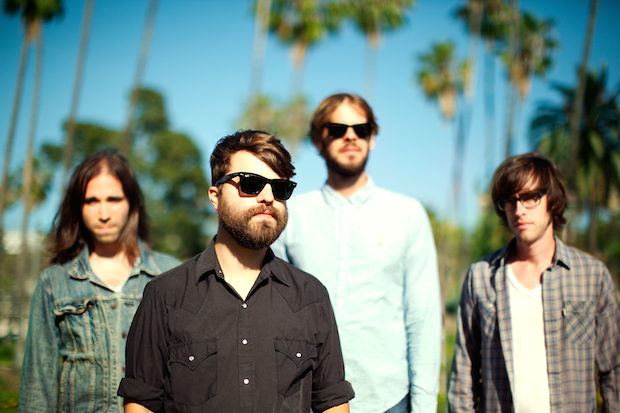 It seems as though tonight The Basement has put together a show of musical greats: Soft Swells, Pageant and Eliot Bronson will all be welcomed onto the stage for this Hump Day performance. All three artists are celebrating recent or upcoming album releases, so the energy for tonight’s show should be high on the wake of new material to play. It will be an opportunity in some cases to hear music that has yet to be played live – and who doesn’t love to be the first to hear or see something? So come on down to The Basement – a legal drinking age and $7 cash at the door will gain you access.

Despite the relatively calm and collected name of this group (which happens to also be a surfing term), Soft Swells are, in fact, an explosive, over-the-top band. Based out of LA, Soft Swells are actually a very worldly bunch. Started by Tim Williams, their latest album Floodlights was recorded in England with the help of some in-person musical cameos (Soft Swells’ touring bassist Christopher Pappas and Phil Wilkinson of Brian Eno) as well as some online contributions via email from Misty Boyce (Sara Bareilles), Jonathan Visger (Dale Earnhardt Jr Jr) and the group’s touring guitarist Kyle Frederickson. Listen below for a sample:

Brother and sister duo Derek and Erika Porter have put aside the sibling rivalry that typically plagues children born to the same parents in favor of creating the indie/folk rock band Pageant. Joined by Stephen Albritten and Nick Frampton, this Nashville-based group has just recently released their album Royal Blue, and are eager to present the material live tonight.

Singer/songwriter Eliot Bronson is one of those down-to-earth artists whose heart and soul are literally infused into every song he writes. His most recent creation is a self-titled album expected to be released on Oct. 21 of this year. Having recorded it with acclaimed producer Dave Cobb, Nashville is excited to hear what the two masterminds produced, and tonight is our chance to get a sneak peak.

Soft Swells, Pageant, and Eliot Bronson will perform tonight, Oct. 8, at The Basement. The show is 21+, begins at 9 p.m., and tickets are available for $7 at the door.