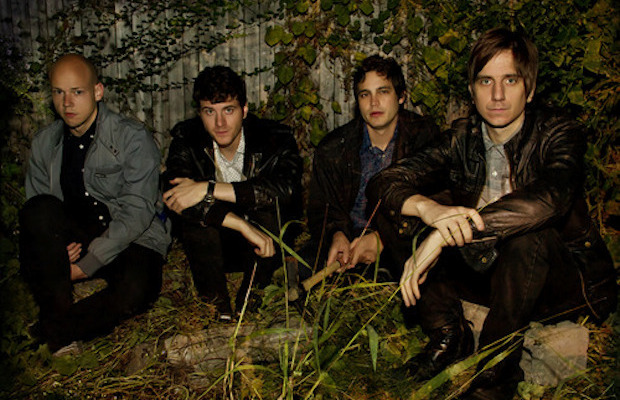 Somehow, we resisted buying drinks at The Basement on Thursday night, and that’s in part because we wanted to be fully immersed in the music we were about to see rather than preoccupied with – well, anything else. We set up shop at a back corner near the audio engineer’s booth so we could get the best sound and waited patiently for a night filled with the music of The Nobility, Earl Burrows and out-of-towners The Dig.

It was a night that more than lived up to our expectations. Boundaries were pushed to the max of what constitutes rock music as each band stood up and presented a different perspective on the genre. If you were lucky enough to be among those present, then you’ll know what we’re talking about.

When a band has the ability to revive a person after an intensely long work day and only 4 hours of sleep, that is saying something. The Nobility took the stage twenty minutes after 9PM and immediately began to wake us up with songs that cascaded from gentle melodic openings to intense, fiery rock and roll. It was as if they took every genre they enjoyed and somehow successfully incorporated it into their music; one minute was a catchy ’50s doo-wop hook and the next it was a powerful storm of instruments that pumped life into your veins. After thirteen years of DIY touring and recording, The Nobility proved that it wasn’t all for nothing as they proudly announced the launch of a Kickstarter to help them record their next album.

When Earl Burrows took the stage, it was energy from start to finish. Every person who was in the entryway to The Basement promptly ended their conversations and crowded into the main part of the venue to hear this unusual quartet bring controlled musical madness into the room. Yet again, here was a band that took rock music to a new level in terms of interpretation and presentation. You know how some bands tend to have a bunch of songs that all sound the same? This is not the case with Earl Burrows. Every song, while similar stylistically simply because they’re all written by the same band, are all distinctly different and unique from each other, and left us curious to know what they would pull out of their pockets next.

Interestingly enough, The Dig did not actually take the headliner’s position as the last band to play. They went second in the lineup, which is not entirely unusual when a group is from out of town. New York is a far cry from Nashville and we were curious to see how the Yankees would handle a Nashville crowd. Two years ago The Dig played at The Basement, and when they stepped up to begin their set it felt a little like they were coming home. No sign of nerves, no second-guessing; The Dig owned their music with pride and began to play the ethereal tunes they have become known for as blue lighting washed over their faces. Their sound felt bigger than The Basement, like it was trying to push against the brick walls and escape. Unlike other shows we’ve witnessed, not a soul spent the time chatting away but everyone present was instead paying their full attention to the New Yorkers on stage. Even when the band had a snafu with their bass amp malfunctioning, they recovered smoothly with a “We triumphantly return!” before launching back into their set, finishing as if the issue had never occurred.

Overall, we felt like we’d spent the evening getting a music lesson. We’ve always known that music is versatile and takes on many different forms; but to see three bands present three very different perspectives on the core genre of rock and roll was a fascinating experience – and that’s what a live show should be, an experience. When The Dig rolls back into town, don’t miss the opportunity to see them, and lucky for you Earl Burrows and The Nobility are local – and you can bet we’ll be going to see them again.