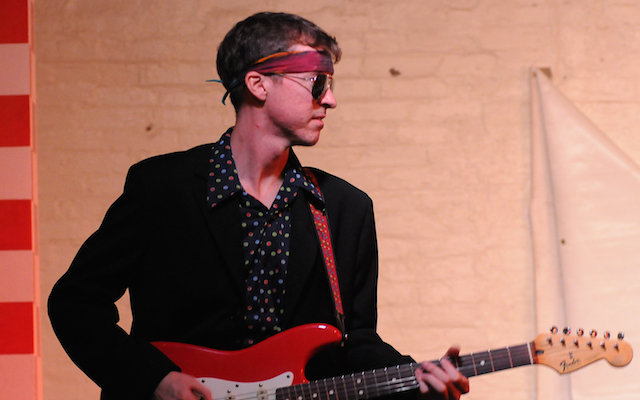 Friends, we just had another great Tuesday night showcase for the record books. If you’re not up to date, we’ve been hosting weekly performances downtown at Acme Feed & Seed in an effort to bring our readers (and anyone else who happens to walking by) some of the best talent around. This week proved to be no exception, as we welcomed local blues/soul rock act Andy Dozier & Heavy Soul to the stage. The event was a ton of fun, and we managed to snag a few pictures for your viewing pleasure. After the break, we’ve got an in-depth review and a gallery of photos, so be sure to check out all the fun we had. There will be another showcase next week at Acme featuring The Jag, Mountain Walker, and Berkshire Hound, which, as always, will be totally free to the public. We’ll have more details on that show later on, but, in the meantime, keep reading for more about the talented performance put on by Andy Dozier & Heavy Soul.

Every time we visit Acme Feed and Seed, the venue seems to be more bustling and busy than ever before, and this week was no exception. Between drinking, grabbing a delicious bite of food, and simply showing up to see the band, the first floor was absolutely packed before the Andy Dozier began. Soon enough, however, the five piece soul act took the stage. For this performance, they appeared with a special guest, saxophonist Braxton Nicholas, a name you might recognize from his work with the Nashville Horns. The lineup was well rounded in that it featured keys/organ as well as the saxophone, offering a wide range of sonic possibilities that the group was hardly hesitant to explore.

Like many soul/rock acts, Andy Dozier & Heavy Soul utilize two primary methods to connect with their audience. The first of these is their fantastic frontman. Dozier himself is charismatic on stage, and capable of singing with impressive pitch and dynamic range, a must for the group’s rocking, near-vintage sound. In fact, their sound is likely best described by their own name: heavy soul.

The other method of engagement utilized by Dozier & Heavy Soul was a generous mixture of covers between their original tunes. Over the course of their two sets (with a break in the middle), attendees heard tunes from Stevie Wonder, Sublime, Snoop Dogg, and numerous other artists. While the true gems of the performance were definitely the bands original tracks, their ability to see the importance of engaging an audience with covers, especially on Broadway, should highlight an awareness of some of the necessities of putting on a great live show. Regardless, it seemed as if the audience dug the covers, and it wasn’t uncommon to see people singing and humming along to the songs they knew.

All in all, it was a very fun evening, as we suspect any Andy Dozier & Heavy Soul show might be. This next Tuesday, featuring The Jag, Mountain Walker, and Berkshire Hound seems like it’ll be a lot of fun as well, so be sure to come on out, bring your dancing shows, and get yourself a Mule Kicker. (Don’t know what that is? We guess you’ll have to come to Acme and find out!).