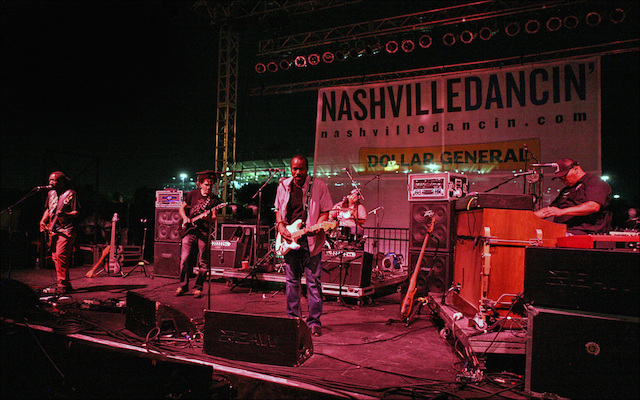 We’re back at it again this week with our fifth installment of coverage on the free concert series Nashville Dancin’ (you can find the previous coverage here, here, here, and here). The shows takes place each Thursday at Riverfront Park, and yes, there is another installment this week featuring the spectacular Hayes Carll, but that’s not what this piece is about. This piece is about last week, and the funky good time we had seeing Dumpstaphunk. The New Orleans based funk five piece really threw down on some dirty riffs and…wait a minute. Let’s just start at the beginning, with a local act: Kansas Bible Company.

The 11 piece (yes, eleven) began their set in front of the water on Riverfront in broad daylight. Now, if you know anything about live music, you know that playing outdoors, at daytime, without the benefit of stage lights can be quite a damper on the stage presence of the band. Kansas Bible Company, fortunately enough, did not really seem to fazed. Perhaps this is because of the large number of individuals in their band, but we’d like to think its something deeper. To us, they succeeded in putting on a successful daytime set because their music is itself very much “sunny day” music. It’s what you listen to cruising on a summer afternoon, windows rolled down, cigarette in hand. This laid back aesthetic definitely reared its head live, perhaps even strong than in their recordings.

Unfortunately for Kansas Bible Company, they played first this evening, and truthfully not a lot of people had showed up that early. However, those that were present for their set immediately perked up and became ready for the evening. As Nashville Dancin’s go, this was definitely one of the most upbeat and grooving lineups, and Kansas Bible Company made certain of that from the very beginning of their set. They played to the people who would later be the trendsetters in the crowd, amplifying the energy and enjoyment of everyone around. Interestingly enough, this same amplification effect can be noticed almost any time someone listens to Kansas Bible Company. You know why? Because they are simply one of those bands that know how to make people smile, and that’s exactly what they did last Thursday.

Following Kansas Bible Company was an act by the name of Terrance Simien and the Zydeco Experience. We have to say, this was a set we were entirely unprepared for, yet enjoyed quite thoroughly. Perhaps it was only the group of people we stood near, but the Creole-inspired originals and covers from this band really seemed to go over well with the crowd. People were dancing and shaking, trying to entice Terrance Simien to toss them some bead necklaces, and it’s worth noting that there were some really funky keys lines. Perhaps the highlight of the set was when the washboard player brought out his wife and two kids, all three of whom proceeded to pull out their own, custom-sized washboards for a family jam. All in all, it was exactly the sort of clean, upbeat fun that live shows should be about, and you could see that the only people enjoying the set more than the audience were the band themselves.

As one could imagine, the combined forces of Kansas Bible Company and Terrance Simien and the Zydeco Experience set quite the precedent for the rest of the evening, and the next act, Sister Sparrow and the Dirty Birds, had quite a challenge in front of them. Truthfully, the first song or two that the eight piece played lacked that certain luster gained from really playing in the pocket that a funk band needs to be successful live. In the opinion of this author, this was because the front pit had cleared out entirely save for one brave older gentlemen and a handful of children. To me, this was simply unacceptable. I gathered a group of friends, downed a beer, and proceeded to shake my thing like never before. Our energy seemed to permeate through the crowd, and hesitantly, a few other groups of people joined us. Seemingly out of nowhere, the front pit was packed, and the band’s sound immediately came together into the tight grooves and sweet harmonies that we all love Sister Sparrow for.

Once the initial jitters had worn off, Sister Sparrow and the Dirty Birds actually played a very enjoyable set; we particular dug the Led Zeppelin covers the band pulled off. Also, no review of this show would be complete without a tip of the hat to Jackson Kincheloe, who definitely proves the harmonica is one of the most overlooked instruments around. Ultimately, Sister Sparrow had no troubles rising to the occasion, and it was pretty obvious why the group manages to score hundreds of gigs every year.

Finally, we’re back to the evening’s headliner: Dumpstaphunk. It’s hard to even find a place to begin with their set, as the musicality of the entire affair was top notch. Each of the five players in the New Orleans based funk act proved time and again their mastery over their instruments, which had quite an interesting effect on the band. Yes, Ivan Neville comes off as the frontman of the band, but he really doesn’t stick out of the overall texture of Dumpstaphunk. All five of the players had their moments of glory, and they shared them during the hooks and choruses. This all evidences a very deep relationship between these musicians, and a remarkable level of clarity and agreement over the sound and goal of Dumpstaphunk. In the industry, we refer to this as being “tight”.

All in all, Dumpstaphunk’s dirty, upbeat sounds were the perfect climax to the evening, and more so than any other week, the name Nashville Dancin’ seemed very appropriate. It’ll be tough for the bands this week to follow such an awesome show, but if anyone can do it, it’s Hayes Carll. You can catch that show this Thursday at Riverfront Park, and keep an eye out for out in-depth preview coverage of the show coming later this week. In the meantime, we recommend you go and download some of the music by the acts we just discussed and have yourself a funky good time.  Click through to check out the photos from Michael Brooks below.