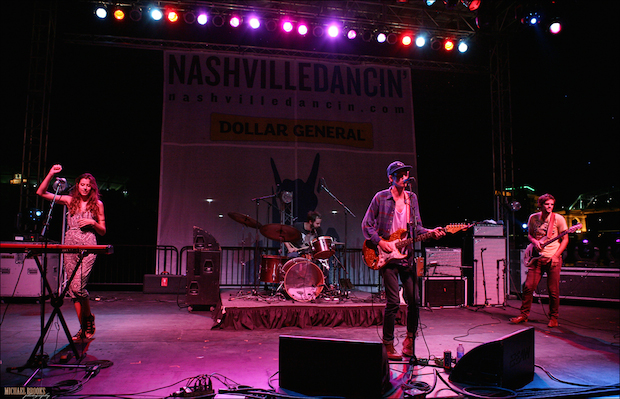 This past Thursday kicked off the second installment of the Nashville Dancin’ series since it made its return last year. The beautiful weather, great view, and the undeniably wonderful smell of more food trucks than you could possibly eat from, all made for one terrific setting for what ended up to be a great first show. Though the crowd was light in the beginning, the whole park ended up being filled once dusk settled in.

Keep reading to find out more about all of the acts that made the inaugural 2014 edition of Nashville Dancin’ so special, and be sure to browse through some of the incredible photos from Michael Brooks.

The night filled with many phenomenal artists started out with country artists The Kernel & His New Strangers. The mixture of fun lyrics and fun music made for a set that even those who aren’t fond of country could enjoy. In between songs, The Kernel would crack some jokes to keep the mood light and kept the crowd even more into the set. The only downside to the set (which could not have been controlled by anybody) was that during the whole set, the wind was gusting around, making it difficult to hear at times. That aside, The Kernel put on a great show and was just the start to the night.

Next up were local favorites Los Colognes. Being from Nashville earned them quite the applause from the crowd in the beginning, and putting on a tremendous show earned them an even louder one at the end. Not only did they sound great, but also the amount of fun that they were having on stage was contagious. It was impossible not to smile and sing or hum along. If you missed them at this show, they will surely be playing more somewhere around town soon and they are definitely not a band to miss twice.

Arguably the most well known band of the night, Nicki Bluhm & The Gramblers hit the stage third. At this point, the wind started to die down and the sun began to set, so the music was far easier to hear and the light show looked awesome. That aside, Nicki sounded astounding; her voice was powerful and on point the whole show. Some of the songs included duel vocals with Nicki’s husband Tim, and he sounded just as great. The crowd was enticed by the music, dancing along during the entire set. Nicki’s presence on stage was just as great, jumping, dancing and having what seemed to be the time of her life. Nicki Bluhm & The Gramblers were possibly the most hyped band of the first week of Nashville Dancin’, and they certainly lived up to that hype.

Closing out the night were the indie-rockers, Houndmouth. Not only did Houndmouth put on a great live show, but they are also one of the most exciting artists that I have ever seen. The main reason for that being because not only do they have four vocalists who all play instruments, all the vocalists sing lead multiple times each. Yes, even the drummer. All of the different voices put a really nice spin on the show and kept the entire show fresh with the constant change of voices. Needless to say, Houndmouth are definitely a must-see artist if you have the chance to see them, no matter what type of music you may be into.