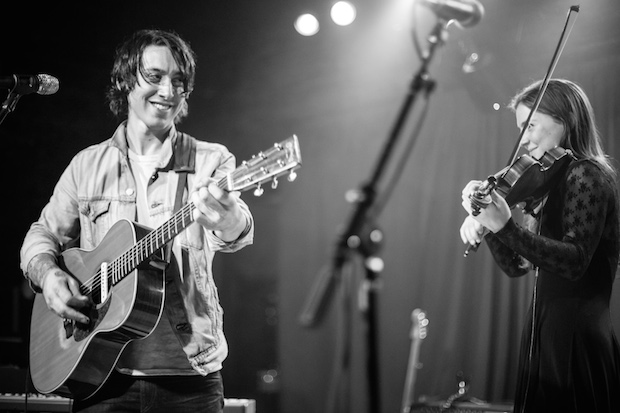 From start to finish, Noah Gundersen’s SOLD OUT show at the Mercy Lounge last Sunday was straight magic. Even though the room was bursting at the seams with listeners, the packed lounge was often captivated and quiet. We were lucky enough to be a part of this experience and to capture some great moments on stage for you readers. Check out the full review and photos after the jump.

Armon Jay, a local singer/songwriter, is the ideal man to open a Noah Gundersen show. His lighthearted and animated nature was a great balance to his deep and introspective lyrics. After singing about serious thoughts like the fear of dying versus the fear of living, he would joke about his “smoker’s teeth”, and if babies could be born with them. Armon’s style has notes of Conor Oberst, and he kept it simple with only keyboard, acoustic guitar, and harmonies to go with his unique blend of soft and coarse vocals. His song “Everything’s Different, Nothing’s Changed” was relatable and moving… literally.

David Ramirez was a last minute addition to the ticket and, while at first apprehensive about two openers, he made us wonder how Noah ever toured without him. The man is cool and steady, and he plays with the outline of Texas, his home state, tattooed on his strumming arm. We’re always delighted to hear a singer with a low voice and a southern accent, but were amazed when hearing his smooth falsetto. David’s music is like a Johnny Cash and Ben Howard country soup, and his songs “Stick Around” and “Fires” were included in his powerful setlist.

With the massive crowd well warmed up, Noah Gundersen strode onto stage with his brother Jonathan and sister Abby. Together, they started their set with a chilling and completely unforgettable a cappella intro. The 24-year-old and his band are from Seattle Washington, but are on the bill for the Nashville label, Dualtone Records, who released his first full length album in February called Ledges. However, it was evident that Noah’s last three EP’s made some serious waves to draw such a massive following.

Noah’s set was filled with peaks and valleys. From the tenderness of “Jesus Jesus” to the intensity of “Fire”, he showed his skill and versatility as a songwriter. Around midway through, Noah and his sister surprised the audience with a gorgeous duet covering Drake’s song “Hold On, We’re Going Home” leaving the collective jaw of the audience on the floor. He continued on with “First Defeat”, and called opener David Ramirez back to join him in the spotlight for a cover of the eponymous Bob Dylan / Johnny Cash Duet, “Girl From the North Country”.  We were stunned to see so many people so quietly captivated by his music. He ended the performance with a near lullaby called “Time Moves Quickly” that he and his sister wrote together. As Abby Gundersen closed out the show softly on her piano, Noah walked out without a word or a wave. As we were shaking off the chills, we heard a man behind us say, “That was the best closing song I’ve ever heard.”