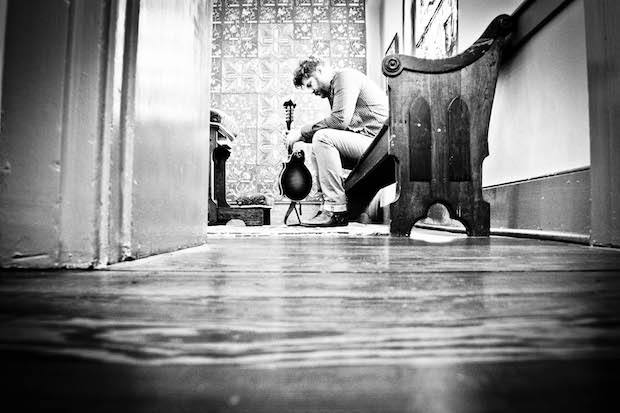 Nashville’s The Whistles And The Bells may sound like a new band on the scene to you, but the creative mind behind it is Bryan Simpson, who just a couple of years ago was touring with the likes of Mumford and Sons as the frontman for Cadillac Sky. Things began to shift for Bryan when he experienced a bit of a spiritual crisis. He abruptly quit Cadillac Sky, and began a journey to find the voice within. Today that voice comes to us as The Whistles And The Bells.

The first effort of The Whistles And The Bells is the soon to be released (3/4) self-titled debut, which already garnered a bit of buzz when Rolling Stone premiered the first single, “Mercy Please”. That single is currently available for download via Nashville Indie Spotlight, or you can check it out on Spotify. We’ve spent a bit of time running through the Vance Powell (Jack White, Willie Nelson, North Mississippi Allstars) engineered album already, and were thrilled to hear that The Whistles And The Bells wanted us to premiere our favorite song off the record, “Transistor Resistor.” This track peels away from the traditional twang, and hits harder with a lot of distortion reminding us more of Jack White than Mumford and Sons. You can have your first listen to that track below, and, if you need more juicy bits behind Bryan’s transformation from Cadillac Sky to The Whistles And The Bells, you can check out the Jack Bauer inspired “interrogation interview” below too.

Nashville can get a live taste of The Whistles And The Bells at their album release show on 3/20 at 3rd and Lindsley.  You can grab some tickets for that one right here, and tell your friends about it on Facebook right here.