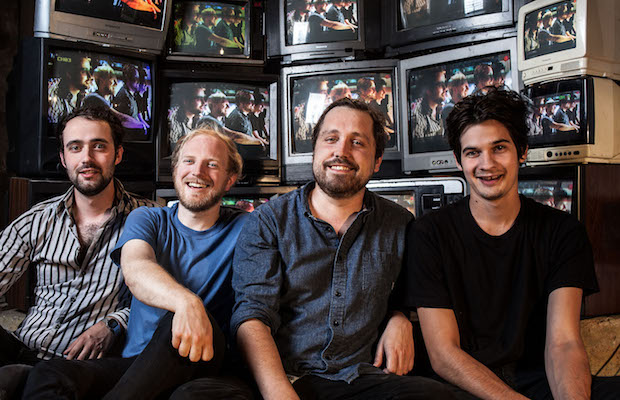 You’ve had a few chances to catch Royal Bangs lately: opening for Jimmy Eat World in August, Phoenix in October, and, most recently, Geographer. Tonight, however, the Knoxville indie rockers are slated to headline, 9 p.m. at The High Watt, with Bad Suns supporting. We managed to catch several of their supporting slots this year, and can’t recommend the group enough! Find out more about the show after the jump, and be sure to snag tickets right here.

Royal Bangs are nothing if not eclectic. On their latest and forth full-length, BRASS, which was produced by The Black Keys’ Patrick Carney, the group explore styles ranging from dance rock, pop, indie, retro, psychedelic, alternative, and more. Landing more in the realm of up-tempo and high energy, Royal Bangs’ songs really shine live, and their stage presence (and unique stage setup, the handful of times we’ve caught them recently) is undeniable. They’ve been great in every setting, and should be extra awesome for a full set in an intimate setting!

Hailing from California, young indie rockers Bad Suns have already amassed quite a bit of buzz for such a new band. Their debut EP, Transpose, will officially arrive next week, but you can hear most of it now. These guys are destined for big things, so catch ’em in a tiny room while you still can!