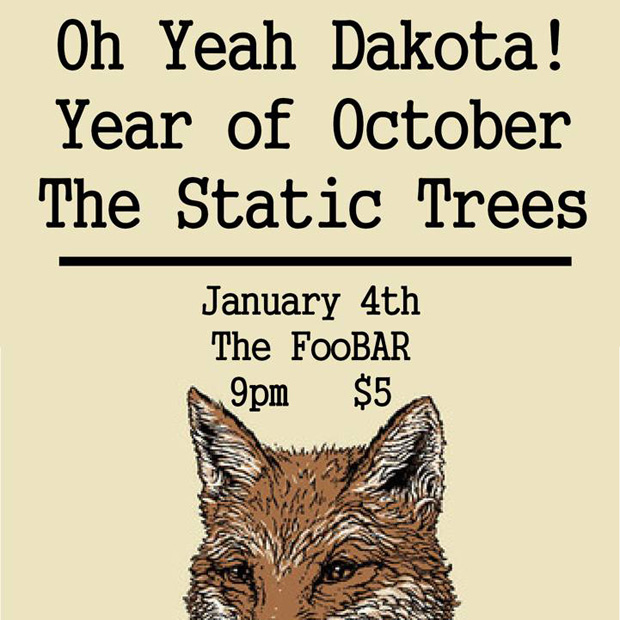 There are few things as unpleasant as sulking back to the office with a New Year hangover. Returning to the grind can really get in the way of that holiday groove we all work so hard to get right. If you managed to survive the post-holiday blues, we have just the thing to get your fire burning again. Keep the New Year excitement going for another night with Oh Yeah Dakota!, Year of October, & The Static Trees on Saturday January 4th at fooBAR. More details after the jump!

This trio from Paducah, Kentucky has been rocking for almost six years. They boast a wide variety of influences ranging from rock to hip-hop to jazz to Latin, but rock and blues are clearly dominant. If you’re looking for dirty riffs and filthy grooves, then these guys will have your jam. Check out their ReverbNation page for some tunes and more!

This Nashville-based blues/rock band was formed in 2010 by husband and wife Phlecia and Josh Sullivan and was later completed with the addition of Greg Diamanti on drums. They are touring the Southeast in support of their upcoming album due out in the Summer of 2014. But in the meantime, you can check them out Saturday night, on Bandcamp, or on Youtube. Their combination of sultry, soulful vocals and in-the-pocket grooves are guaranteed to melt your butter.

High school friends Nikki Barber and Dylan Whitlow formed their band almost four years ago after Dylan wrote a song and decided it needed a woman’s touch.  Of course, the cover of Wait’s “Heart Attack And Vine” below is just another reason that you should get there early enough to check them out.

Oh Yeah Dakota!, Year of October, and The Static Trees will perform Saturday January 4, 2014 at fooBAR. The show is 21 & up, begins at at 9pm, and tickets are available for $5 at the door.

No Country's Best Nashville Albums of 2013