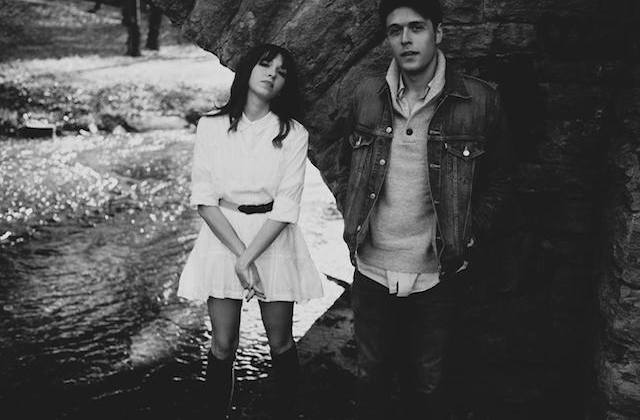 Usually, things don’t tend to work out too well for the guy who pulls out an acoustic guitar in the middle of a party. Then again, the story of how the The Saint Johns came to be isn’t the usual one. Louis Johnson and Jordan Meredith met at a mutual friend’s get together back in their home state of Florida. After Louis started playing a guitar and Jordan matched him with a song of her own the two realized they were onto something. The duo quickly began writing and recording together, and in 2011, decided to make the move to Nashville . Now, with the debut of their music video for lead single ‘Your Head and Your Heart’ and a hometown show tonight at Exit/in with Stephen Kellogg,  The Saint Johns are on the verge of something big.

We had a chance to sit down to chat with them recently, and you can check out that interview, as well as the new video, below.

NO COUNTRY FOR NEW NASHVILLE: The two of you have actually been working and writing together for almost six years now, with the development of The Saint Johns coming later in that time frame. What was the real starting point for the band?

LOUIS JOHNSON: We moved to Nashville in 2011 to record a new record. We were a different band that was more pop/electronic. We realized we had a different sound and had options. We could start over or we could rebrand, which we did. We started over and called ourselves The Saint Johns and ever since then we’ve been all about it.

JORDAN MEREDITH: A year ago we officially renamed the band but the process started two years ago with writing.

LJ: But our first show as The Saint Johns was in December of last year.

NO COUNTRY: How do the mechanics of songwriting work between you? The method behind the madness, if you will.

JM: A lot of the time we sit down and we write but we like to let each other have creative space. Lou will bring a song to me once it’s at a point and I’ll look it. The method changes and keeps it fun and we keep it between just the two of us.

LJ: There’s only one song, ‘Open Water’ that we sat down and thought ‘Let’s write a song together’. That doesn’t work for us most of the time. We have different relationships and different emotions and its hard to write about that at the same time together.

NO COUNTRY: Are there any constant sources of inspiration (i.e. authors, filmmakers, other artists) that you are always going back to draw from?

JM: The whole reason I started playing was because of the powerful women in music. Janis Joplin, Sheryl Crow, even as stupid as it sounds Michelle Branch. I think about the time of my life when I was starting to write and those women were huge influences.

LJ: It’s hard because a record will come out that blows your mind and you think, ‘That’s never been done before’, or it expands what you thought was even possible. Inspiration from new bands, yes, but artists like Tom Petty and The Beatles. Bahamas is a current one that are doing new things that I’ve never heard before. But we pull lyrics from our relationships whether good or bad and that’s the long or short. You have to write what you know.

JM: I had gotten dumped when this started. So quite a few of the songs are me beating myself up and Lou putting up with me.

NO COUNTRY: Bands like fun. and Lord Huron have seen their audience reach grow tremendously because of song placement. Recently, you guys have snagged a few big synchronizations (song placements) in shows like FX’s Sons of Anarchy and ABC’s Nashville. Talk a little about the importance of that for you and for artists as a whole.

LJ: For us, syncs are a lifeline. They are one of the few things that pay well to artist so its been helpful for us and helped us finish our EP. The syncs that we got were not huge enough to be commercials but it got our music out there to new people and they’re still hearing the songs and getting it in their heads so we’re fortunate and lucky. Bands are exploding from good syncs but it’s a combination of a bunch of factors. But that’s definitely a big part of our plan for the EP and the next record. To get as many syncs as possible. That’s a big, big thing for us.

JM: It’s been fun to see people commenting on our Facebook or Twitter and say ‘I heard your songs here or here’ and watching them spread the songs to their friends and then their friends. Just to watch it happen that way.

LJ: More than anything it’s a confirmation to our families that were actually doing something (laughs).

NO COUNTRY: In a time dominated by social media and overnight YouTube sensations, the perception and standards for ‘making it’ in the industry have become skewed. Do you guys try to define an aspect or level of success for The Saint Johns or is the fact that you’re simply doing what you love enough?

JM: I feel that it changes on a regular basis. At first, we wanted to just make a record. Then, we got a booking agent. Then, we wanted on awesome tours and now we’re on awesome tours. Then, we got a show placement and wanted a movie placement. We’re pushing the bar and I think that’s healthy. When we’re headlining a tour and sell out venues, even if they’re small, that’s a victory in my eyes. I will be stoked.

LJ: People aren’t really selling records. It’s not about that anymore. We want to but we really want people to come to our shows and be singing our songs. This is what we love to do and it’s where we want to be. We would love to headline a tour but it has been so exciting just getting to each level.

NO COUNTRY: Does the fact that you’re a part of the Nashville community make it more inviting to play around town or more intimidating?

JM: It’s weird because we have so many friends here and it’s very inviting. But it’s also intimidating because there are so many people who come out that are cool kids and it’s a huge compliment because I’ve been a dork my whole life. You want them to see your vision and think it’s awesome so it’s definitely a mix. I can understand where people who don’t live in Nashville are coming from when they come here and don’t get the response they want. There are so many creatives that it’s hard to get an ‘ooh’ and ‘ahh’ response. It’s just hard to keep up.

NO COUNTRY: As this tour (and the year) winds down what does 2014 look like for you? Are there plans to release a full-length anytime soon or anything you’re excited about in particular?

JM: We are working on a full-length. It’s over halfway finished. But with touring we’ve had to put it on hold so we’re super excited to finish recording. Definitely more touring. We’re not sure which ones but definitely more.

LJ: Between touring and trying to figure out if we want a label partner and who that would be for the album to come out. We have a publishing company that we work with and they’ve helped us with the marketing for our EP but we’re still doing everything else ourselves and don’t have a label. Everything is in house so far. So I guess building and making the final pieces come together.

NO COUNTRY: Let’s shift gears a bit to a few questions you might not get asked as often but probably always wanted to address. Jordan, I know you’re a huge Harry Potter fan. Have you ever really come to terms with not receiving your Hogwarts acceptance letter on your 11th birthday?

JM: No, I’m still waiting for it and hoping that it’s just late admission. One time Lou and I schemed that we were going to go up to random children and tell them that they were a wizard but then we didn’t want to be pedophiles.

LJ: What I’m confused about is that, in books and movies, people come up to the child and say, ‘You’re a wizard!’ or whatever and the kids are so reluctant. Why are they fighting it so hard? They have awful lives and are reluctant to leave them. Like Luke in Star Wars. I would not be so reluctant.

NO COUNTRY: What’s one of the recent times in your life where you felt like the biggest idiot?

LJ: We had to unload the car and put down the seats just to get her out of there.

JM: I was laughing and crying and I couldn’t get it off.

LJ: So the time I most recently felt like an idiot was when I had to get Jo out of a seatbelt (everyone laughs).

JM: Wait, Lou, I want to know your real moment of feeling like an idiot.

LJ: Just this morning I was washing bird poop off of the car we were driving and one of the family members of the house we were staying at finally came out and put the hose super close and just got it off. I just felt bad, like, ‘You can’t wash the car, too!’.

NO COUNTRY: Are you guys twerking hard or hardly twerking?

JM: I think I’m twerking hard becauase I’m working hard at twerking. I don’t really know how to do it yet so I work and twerk hard.

The Saint Johns and Stephen Kellogg will perform tonight, November 13, at Exit/In. The show is 18+, begins at 8:00PM (doors at 7:00pm) with tickets available at the box office for $20.