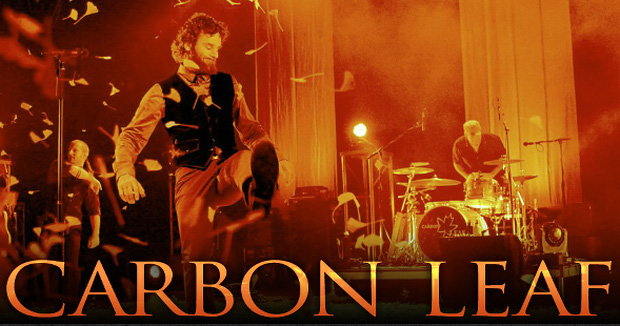 Even if you’re not into adult-alternative roots/jam-rock, you have to respect bands like Carbon Leaf. Though the genre experienced a renaissance in the ’90s with the rise of names like Blues Traveler and DMB, it remains perhaps the most “blue-collar” domain of popular music. Blue-collar not necessarily in terms of the genre’s audience, but in terms of the work-ethic of the bands that occupy it.  At Carbon Leaf‘s stop tonight at the High Watt, the Richmond, Virginia natives will be drawing on material from 15 albums (the last five of which were independently recorded and released), will be showcasing their prowess on the tin-whistle, bouzouki, bodhran, uilleann bagpipes, mandolin and fiddle (in addition, of course, to the guitar, drums, and bass), and will be coming off of 22 prior performances in October alone. So, ask yourself, 1: What have I done today? and 2: Who deserves my $10 more than Carbon Leaf?

Carbon Leaf is currently showcasing material from their previous two albums, Ghost Dragon Attacks Castle and Constellation Prize, so rather than fecklessly try to cover the whole of their spectacular discography, I’m going to focus on these two (also spectacular) releases

The whole of Carbon Leaf‘s repertoire can be described as “Celtic-tinged”, but Ghost Dragon Attacks Castle sees the band attempting to join the ranks of other modern Celtic/Irish-folk revivalist groups. Though they can’t lay claim to the same level of technical prowess or “legit-ness” (by which I mean thorough immersion in the musical tradition) as groups like Gaelic Storm, their contribution is more than passable. In fact, Ghost Dragon Attacks might be the most enjoyable album in their whole catalog, though I have to preface that verdict by admitting my huge soft spot for Celtic music (honestly – what doesn’t sound better with some tin whistle or uilleann pipes). You’d best be on guard against the album’s generous supply of drinking references and characteristic Celtic lilt, lest you unexpectedly find yourself busting out a jig, housing Irish whiskey, or at the very least, wearing a goofy grin from ear to ear. Check out, “The Road is Breaking My Heart,” an epic, wonderfully l0-fi dirge that is unquestionably my favorite of the litter.

On Carbon Leaf‘s brand-new, crowd-funded baby Constellation Prize, the band sails back across the pond and lands somewhere squarely in the American folk-music heartland.  The whole collection of songs is dyed-in-the-wool Americana, even if songs like “Circus” and “Love Rain Down” do sound more than a bit influenced by those ubiquitous English folk-rockers, Mumford & Sons. Then there’s “Alcatraz” and “Sparklers,” breezy alt-country anthems that could easily be mistaken for Ryan Adams tunes before the vocal drops in, and the jammy, bluegrass-y “Tombstones and Ashes” and “Wolfin Down Your Heart.” Regardless of the musical legacy they are drawing upon, the band hits the mark on every single number in the collection. Constellation Prize is the highly listenable kind of album that you’ll drop into your car’s player on a long road trip, think about taking out after four complete listens, and then think “Nah” and put it on again.

I haven’t come across Andrew Duhon before, but after a cursory examination of his Spotify catalog, I think he can be most aptly described here as “Ryan Adams with more twang,” or sometimes, “a more audible, more alt-country Ray LaMontagne.” If you’re not familiar with Ryan or Ray, just know that a comparison to either of the two is high praise. Expect a thoughtful, low-key opening set from Mr. Duhon that will probably perk the ears of the songwriters in the room.