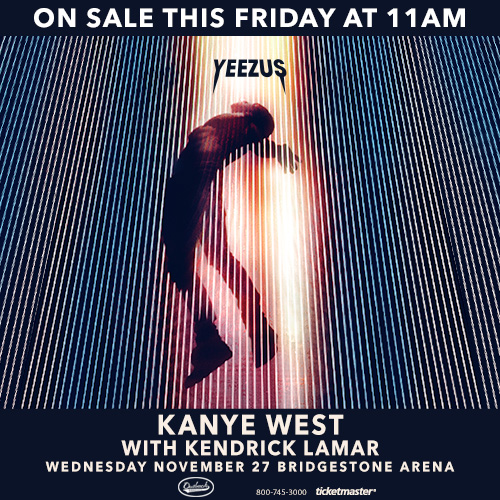 Yeezus himself, Kanye West has announced his first Nashville date in over half a decade, Nov. 27 at Bridgestone Arena. A late addition to the Yeezus Tour, West’s Nashville performance will also feature Kendrick Lamar– a favorite of the site. Tickets go on sale this Friday, Oct. 25, at 11 a.m., with various pre-sales beginning one day sooner, Oct. 24, at 10 a.m. Head here and use the pre-sale code ‘YEEZUS’ to snag your tickets early. Prices start at just $39.50. Since it’s at Bridgestone, the show is all ages.

Recent media controversies aside, ‘Ye is one of the most gifted and successful rapper/producers alive, a profound and multi-faceted artist, and an incredible performer. He opted not to tour on his last proper release, the near-perfect My Beautiful Dark Twisted Fantasy, and in addition to his latest, experimental/industrial full-length Yeezus, has released collaboration efforts Watch the Throne and Cruel Summer in the interim. West is sure to bring out a LOT of material never previously performed live, and, if early reviews are any indication, this show is going to be a true spectacle, if not a somewhat controversial one (but really, would you want your Kanye West show any other way?).