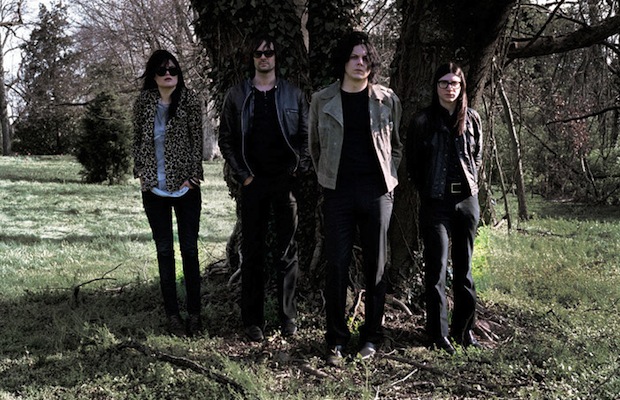 We told you last month that Jack White-fronted, Nashville-based, bluesy garage rockers The Dead Weather were back in the studio, working on new material. Now, with the announcement of the latest Vault Package from White’s Third Man Records, we have a clearer idea of the group’s plans, and the first fruit of their labor. A new 7″, only available via subscription to the Vault, contains two brand new Dead Weather tracks: “Open Up (That’s Enough)” and “Rough Detective.” The band plan to continue releasing material in two-song sets throughout next year, collecting the singles, along with extra tracks, as a full album in 2015.

White’s other project, The Raconteurs, are also said to be working on new material and, though no new studio recordings have yet surfaced, the Vault package will include a new 12″ LP and DVD, Live at The Ryman Auditorium, recorded at a 2011 performance. Jack and fellow Raconteur, Brendan Benson, also just announced a benefit show at The Ryman, set to take place Dec. 18.

After the jump, check out a clip of brand new Dead Weather jam “Open Up (That’s Enough)” and a teaser for The Raconteurs’ Live at The Ryman Auditorium. The Dead Weather and The Raconteurs last released new albums in 2010 and 2008, respectively.