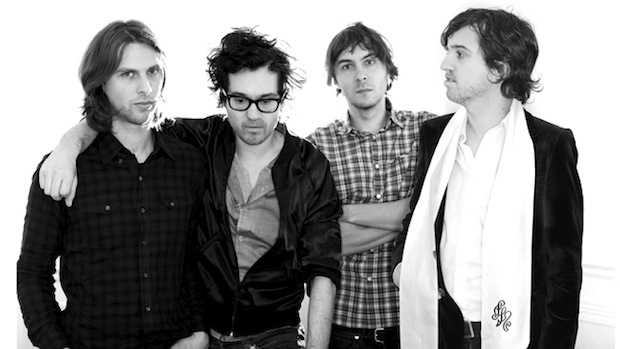 We told you earlier this summer that French rockers Phoenix would be bringing their fall tour to our very own Marathon Music Works on Oct. 4. Amazingly, you can still buy tickets to the show, which is downright intimate by Phoenix standards, but we don’t expect them to last.

Still need some convincing? Wonder where Phoenix have been for the past four years? After the jump, check out a piece by our new contributor Jacob Ryan, chronicling the band’s path to their latest release.

In a world with a 10-second attention span, can a band that was huge four years ago still matter after an extended respite? Judge for yourself on Friday October 4th at Marathon Music Works when Phoenix comes calling.

When last we checked in with the boys from Versailles, France, they were riding an incredible high fueled by a chart topping single, “1901,” and a Grammy award for Best Alternative Music Album… but that was 2009. You’ve probably noticed that it’s 2013. They haven’t been on tour in two years and other then a few pushed back release dates, a cryptic message here and there on their website, and claims of completed new songs, no one seemed to know if there was going to be a new album.

Fans were able to breathe a collective sigh of relief on January 16, 2013 when the band announced the title of their fifth studio album, Bankrupt!, one year to the day after they’d made the announcement of finished new songs. Maybe there is a method to their French-flavored madness.

The first single, “Entertainment,” followed in February, and the album dropped on April 22, debuting at number four on the American Billboard top-200 albums chart. The band has said in interviews the newest offering is a departure from the pop sounds of their certified gold Wolfgang Amadeus Phoenix, and also much more experimental.

Honestly, this writer couldn’t disagree more. To me, Bankrupt! feels like more of the same; a laid back and scaled-down version of their single-heavy Grammy Winner. Any drummer-less band (they still tour with one) is always going to rely heavily on keyboards, but this is their most synthesized work to date. They seem to be taking a page out of their countrymen Daft Punk’s playbook.

In fact, Laurent Brancowitz (guitar, keyboards) briefly played with Thomas Bangalter and Guy-Manuel de Homem-Christo in a short lived band called Darlin’, before he joined Phoenix full-time. Bangalter and Homem-Christo would later buy robot helmets and take French electronic music “Around The World,” so it’s a safe bet they all have each others’ phone numbers.

The dominant keyboards, electronica influences and less radio friendly track lists aren’t bad things. Thomas Mars’ vocals get better and better, finding their place in harmony with the instruments, and by now we’ve all heard the amazingly catchy “Trying To Be Cool” on Lighting 100. Also check out “The Real Thing,” “Bourgeois,” and the title track “Bankrupt!” (the customary mostly instrumental track they feature on all their albums).

No one expected them to top the success they had in 2009 but, for a follow up, Bankrupt! hits the sweet spot of being just good enough… but not great. That said, I’ve seen them twice live and they are a performing band first and a studio band second, so, if you enjoy their work, they are a must-see in person.

Tickets are still available but it will probably sell out, so jump at the opportunity if you’re able. In a town that suffers from having too much going on at times, I still find it surprising these guys aren’t getting a better reception in Music City (this will be the smallest venue on their tour). One would think a band that headlined Coachella in April could sell out Bridgestone Arena in October, or get damn close. I guess fan interest wans when you stop touring for the last few years, but if there was ever a band that could shake off the rust and rise again it’s Phoenix.

Phoenix will perform Friday, October 4th at Marathon Music Works with Royal Bangs. The show is 18+, begins at 8PM (7PM doors) and tickets are still available for $35 here.