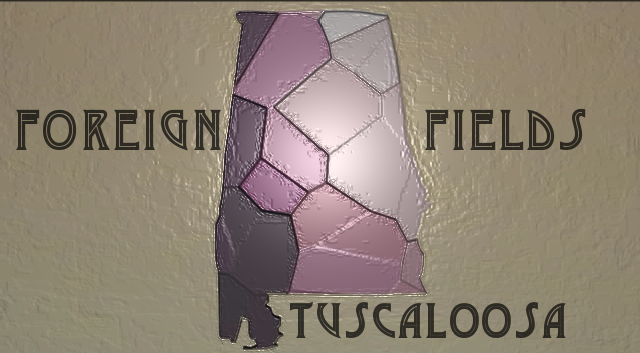 Birthed in the expansive prairies of Wisconsin, few groups are as aptly named as Foreign Fields. The group, who have since relocated to Nashville, play folk tunes infused with the wonderful boundlessness of a perfect blue sky and the organic earthiness of a raspy voice. If that’s not an engaging enough description for you readers then try this simpler statement on for size: Foreign Fields are damn good. Here’s our song by song analysis of their latest release, a 5 track live EP titled Tuscaloosa.

1. Pillars – The track starts off with an acoustic guitar line just vaguely reminiscent of Bon Iver’s “Blindsided,” though by no means is the song a rip off. Tender vocals absolutely drenched in reverb soon take the spotlight, and a rhythmical framework is established by the driving banjo lines and wispy drum crescendos. The expressive vocal melody and subtle harmonies definitely take the spotlight in this track.

2. From The Lake To The Land – Compared to “Pillars,” this second track is substantially less atmospheric. For whatever reason, the impulse to compare Foreign Fields to the Milk Carton Kids is one we just cannot resist, though the milder tracks of artists like Little Kid or Two Bicycles might be more similar to “From the Lake to the Land.” Regardless of who you liken Foreign Fields too, you can be certain this song will lull you into a very cozy headspace.

3. Names and Races – The third track returns to the ethereal tones Foreign Fields excels at. The entire EP places an obvious focus on creating elaborate textures and layers, which is admirable; this often translates a near lack of a rhythmical components tend and makes the songs feel rather long. However, that doesn’t necessarily have to be a bad thing, as “Names and Races” proves. Plus, the song has quite a climactic ending.

4. Mountaintop – Imagine you have one of those newfangled Song Smasher Devices that allows you combine song elements (what, you don’t have one of those?) and you mixed together the warmth of Kings of Convenience with the voice of barely less nasally Andrew Bird and Mumford and Sons instrumentation. That’s “Mountaintop”. No other description is necessary.

5. Fake Arms – Okay, okay. Maybe the last description made it sound like Foreign Fields don’t have their own unique sound. The truth is, Foreign Fields really have done a spectacular job establishing themselves as a unique force in the growing field of ambient folk. “Fake Arms” is conclusive proof of this; it encapsulates the thoughtfulness, spaciness, and emotion of the preceding tracks perfectly.

Tuscaloosa is so tight, it’s hard to even tell it’s a live album. But if live albums just aren’t your thing, our friends in Foreign Fields have an EP and a full length featuring the studio versions of the songs listed above, though only Tuscaloosa is available for free.