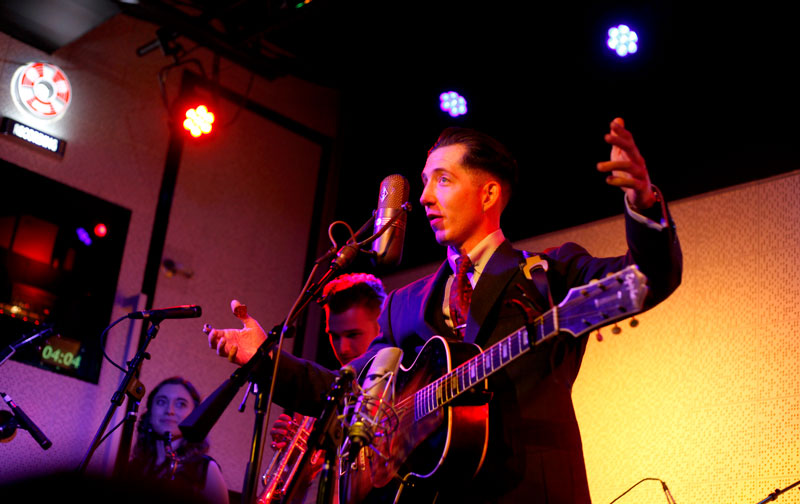 Pokey LaFarge is a timeless soul. Not just in his musical proclivities, but in his appearance, demeanor  and even his manner of speaking. He’s not a retro act; not a throwback and not a gimmick. LaFarge is simply the embodiment of the tradition of music that informed who he is, and one that lives on through him. I admittedly hadn’t been especially plugged into the St. Louis singer’s career up until this point. However, when you have an opportunity to see an artist perform at Third Man- any artist– you go.

This particular evening, LaFarge and his band were performing in celebration of Pokey’s new album, simply titled Pokey LaFarge, which was released through Third Man last Tuesday (June 4). The show was recorded direct to acetate, a practice Third Man has been implementing since their remodel last fall, and featured opening act Paul Burch. This was my first experience catching a band in Third Man’s Blue Room (I had previously seen Aziz Ansari do standup),  and, upon first impression, I’m convinced it might just be the most acoustically perfect performance space in Nashville. The already-fantastic performers sounded flawless, the room was packed with genuinely passionate fans (literally one of the most eclectic groups of people I’ve seen at a single show), and the bands’ excitement to perform was infectious.

Paul Burch was personally asked to open the show by Pokey LaFarge. Like Pokey, Burch has timeless quality in how he carries himself. The singer doesn’t actively seek to present himself as “retro,” he simply interacts in the way dictated by the style he performs and channels those from whom he draws influence. Backed by a fantastic band, including the one and only Fats Kaplin on fiddle and pedal steel, Burch barreled through an eclectic set of material drawing from folk to country to blues to Americana. The audience seemed most engaged when Burch let the band rip, especially some of Kaplin’s mind-blowing solos, but overall, the set was as solidly entertaining and expertly delivered as one would expect from such a seasoned performer. Burch’s influence on LaFarge’s sound is vehemently obvious, a fact Burch himself pointed out when introducing “Harpers Ferry Blues,” one of his oldest tracks. Pokey’s fantastic clarinetist, Chloe Feoranzo, joined the group for their final song, and provided a taste of what was in store for the rest of the evening.

Pokey LaFarge and his South City Three, which, these days, are looking more like a South City Five, took the stage to rigorous applause and excitement. After a bit of a warmup, to adjust the mix for recording, and the suspenseful wait to set the acetate (a pretty unique and interesting process in of itself, and one documented on a tv screen next to the stage for the curious), the band launched into one of the most sonically perfect performances I’ve ever seen. The first batch of songs, used for the recording, were heavy on new material. The skillful group traded solos, alternating between blues and jazz, country and western, ragtime, and more upbeat, contemporary folk-inspired tunes. Though Pokey rarely engaged in flexing his lead guitar chops, it was the whole package- the emotional weight, showmanship, and embodiment of the material, that never allowed him to feel like anything less than the star of the show. Pokey’s stage banter was just as timeless and his image; friendly, dryly witty, and sincerely humble yet confident.

Halfway through recording, while LaFarge was tuning, the audience began oohing and aahing as the recording techs reset the acetate. LaFarge looked up, grinning sheepishly and he realized what had garnered the reaction, and proclaimed “I thought you all had never seen anyone tune a guitar before.” As the group brought a string quartet on stage, the set took a turn for the even more musically adventurous. The strings sounded great, but, at times, felt a little overbearing, clouding the core of the material. New songs like “Central Time” and “Bowlegged Woman” sounded the most refined and fully realized, while older tunes like “Born in St. Louis” called back to LaFarge’s slightly rawer days of shaping his sound. 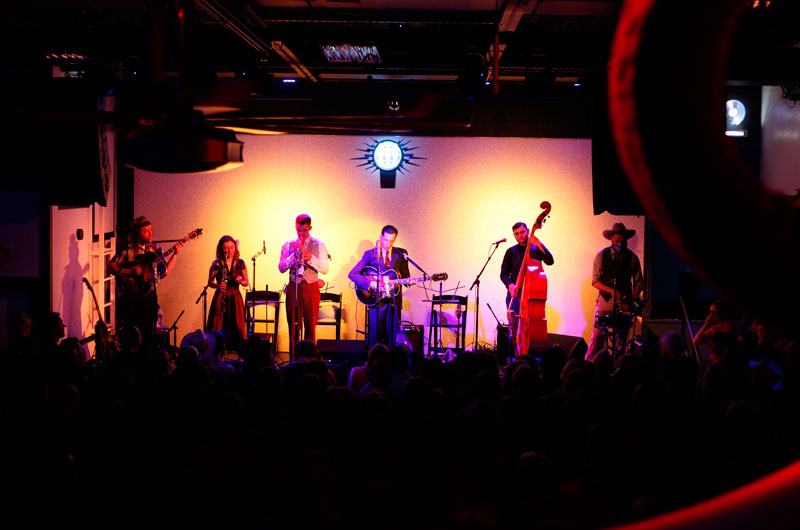 After recording concluded, the band returned for a second set, taking it as an opportunity to draw more from Pokey’s back catalogue, take requests (which LaFarge jokingly suggested be written down and passed up- a suggestion a few audience members followed), spend more time jamming, and banter more informally. While the first set showcased a well-rehearsed, engaging, and professional smattering of material, the second displayed the versatility, playfulness, and technical prowess of the ensemble. LaFarge also took the second set as an opportunity to play a few more stripped down numbers, including “Daffodil Blues,” and new track “Let’s Get Lost,” which the singer performed with only a guitar and bass as his accompaniment.

Every member of LaFarge’s group- bassist Joey Glynn, guitarist Adam Hoskins, percussionist/harmonica player/washboard virtuoso Ryan Koenig, cornetist TJ Muller, and clarinetist Chloe Feoranzo- are absolute masters of their respective instruments. Each got a moment to shine and to show off, but never out of balance with the soul of the material. More impressive than individual skill, was the group’s ability to perform as a unit, everyone serving as a perfect and complimentary extension of Pokey himself. With their closing tune, the lighthearted “Drinkin’ Whiskey Tonight,” the group took one last opportunity to flex their chops and perfectly conclude an amazing night. After nearly two hours of music, I could have watched them do it all over once more. Pokey LaFarge, timeless as he is, would have been a legend in any generation- we’re just fortune that he’s a part of ours.