Black is so HOT right now. Can we thank those two men responsible, The *bleep* Keys? Even when I go to work, this is the only wardrobe color allowed. My instruments happen to be black and I carry them in a case that bears this same color. When the warm light surrounds me on stage, darkness is all I can see when facing the audience. The notes I read and the sky when I drive home…are black.

Secretive and deep, black is the absorption of all color and absence of light. Slinky, sultry, sexy, sable. Turn the damn lights off and let yourself be enveloped by the sound of a spinning vinyl disc of black.

I could talk for days about this color’s significance in music. For now, I’ll take you down this path. I see a red door… and I want to paint it…

Ever since last week when I wrote about the JAG, I’ve been starving for more 60s. While eating psychedelic coleslaw, I cranked up The Black Angels newest album, Indigo Meadow (2012). Instantly, I was sucked into the vortex of Christian Bland, Alex Maas, Stephanie Bailey, and Kyle Hunt. 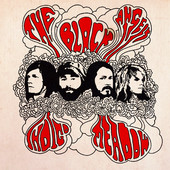 I was so neo-psyched when I heard they were coming to Mercy Lounge Sunday. I put on my best Warhol Superstar outfit and hauled ass across the bridge to see ‘em.

As I slithered my way through the questionable smelling air of recently consumed Mexican food and margaritas, the show opened with a group called Wall of Death, a Nouveau-Psychédélique garage group from Paris, France. You know what a wall of death is—a.k.a moshing. That came about in the early 1980s, which makes an appropriate name for this group. When I heard Gabriel massaging the microphone with his lips, it seemed he was channeling a lighter side of Morrisey while mixing Simple Minds and Pink Floyd. The narrow melodic vocal line in this song contains flavor of 80s-Alt while preserving the droning quality of psyche music:[bandcamp track=2758607153 bgcol=FFFFFF linkcol=4285BB size=venti]

Along with Wall of Death, the singer-songwriter based in Los Angeles, Hanni El Khatib who some of us recognize from the Audi Commercial is also touring with The Black Angels. This guy was absolutely fantastic. The fact that his recent album, “Head in the Dirt” was produced by Dan Auerbach of The Black Keys is even more impressive. HEK performs gritty rock music that manipulates the hips. His music includes influences from the 1950s like Sam Cooke and Johnny Cash. If it wasn’t enough that he’s playing music, he’s also the art director and a part owner of the record label Innovative Leisure. 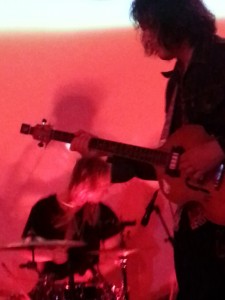 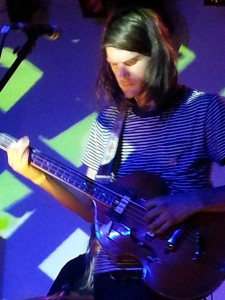 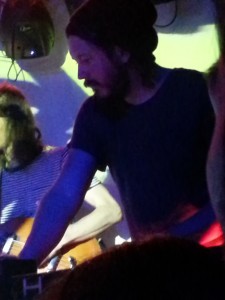 Boys and girls, we will NEVER be able to abandon our blacktraction to music–certainly not when a group like The Black Angels is around. From Austin, TX this band has performed in festivals such as SXSW, Lollapalooza, and was the host of Austin Psych Fest 2013. With FOUR albums stuffed in the pockets of their drainpipe jeans, they are a well-seasoned group who were eager to consume us on Sunday.

Their music parallels many of the ideas I mentioned earlier. It’s intriguing, mystifying, and uncompromising. As for their lyrics, well, they ooze with metaphysical quality—discussing political subject matter in a cosmic sound. Many of their songs are composed in minor keys to encourage introspection. In their song, Don’t Play with Guns, there is a clear message of the consequences of reckless decisions— “Our music has always tried to shed light on issues that may be hard to deal with or confront,” says singer/multi-instrumentalist Alex Maas. “If people think they can ignore the issues they are wrong. Don’t play with guns, don’t touch a hot stove, don’t give your child a poisonous snake, don’t turn the cheek when artists are willing to discuss these issues.”

Yes, they are very dark, but I think it’s because they desire a listener to concentrate on FEELING the spiritual ingredients in their art. The pulsating rhythms paired with repetition of melody (common structures also used in classical minimalistic music like Philip Glass and Terry Riley) generate the perfect environment for an apparitional experience; and if you should listen to Indigo Meadow–their enchanting artistry will forever haunt you.

Photos were taken by me, standing stage left.