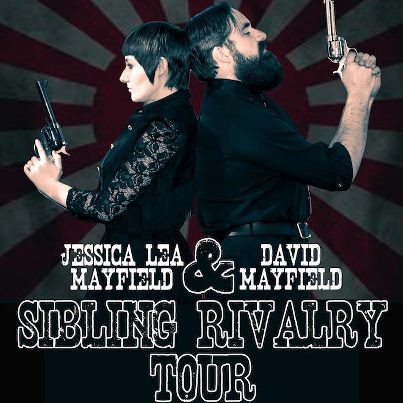 Continuing my trend of writing about sibling acts, here I declare you ought to spend Sunday night with Jessica Lea Mayfield and her brother, David Mayfield, courtesy of Lightning 100.  The Mayfields are a fine example of the great interconnectedness of all music happenings in and around this town of ours. In addition to having lived in Music City there are numerous local ties with these two. After performing in her family’s bluegrass band with brother, David, Jessica Lea Mayfield was “discovered” via home recordings by now Nashville resident, Dan Auerbach of The Black Keys. She later guested on The Black Key’s 2008 record, Attack & Release, then recorded her first “official” debut record in Auerbach’s home studio, and also made an appearance on Auerbach’s first solo record. Her newest record, Tell Me, was also produced by Auerbach for Nonesuch. Incidentally, she’s also opened for Ray LaMontagne (who played our fair city this week).

You may remember David Mayfield from the short-lived Cadillac Sky (their last record was also produced by Auerbach) and locals might recall them opening for Mumford and Sons at War Memorial in 2010.  Below is the incredible super jam combo of Cadillac Sky, King Charles, Mumford and Sons, and Old Crow Medicine Show on OCMS’s “Wagon Wheel” from that show if you missed it – or to relive the magic if you were there with me!

David now has his own outfit, The David Mayfield Parade, and his first record under this moniker features appearances from his sister and yet another pair of my favorite siblings, The Avett Brothers. The Avetts met the Mayfields while David was on the road in support of his sister and the rest was old timey Americana happiness history as much collaboration ensued including some guesting during the Avett’s 2010 Bonnaroo set.

And here’s Seth again, this time with Jessica Lea Mayfield:

And finally, the Mayfields together in harmony:

This pair has tons of experience on the road together, but it’s the first time they’ve teamed up with a double-bill of their own independent projects. I can’t wait for this one and if you’re not able to get down to 3rd and Lindsley, once again we can thank our local radio heroes at Lightning 100 for making the live broadcast available on the airwaves or online.