Just like I did two weeks ago, I’m going to split the new music coverage into two posts because there’s just too much worth highlighting to squeeze it all into one. I’m doing it a bit differently this time. A lot of interesting EPs were released this week, so today I’m focusing on those and I’ll bring you my picks for the best new full-lengths tomorrow. We’re in the home stretch of 2012, so the major/hyped releases are pretty much over, giving way for lots of interesting and independent music to shine. I hope you give some new bands a chance and check out: 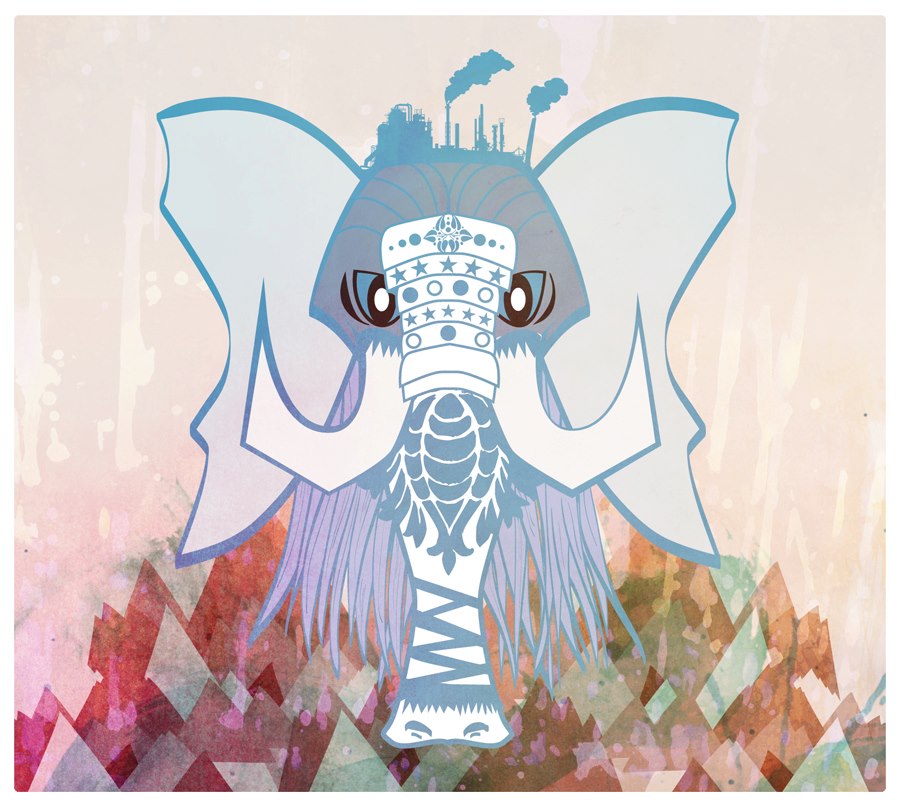 Quick Take: This is my first essential pick this week. Just a few years ago it seemed like Long Island’s Hotel of The Laughing Tree were poised to explode out of the underground indie rock scene. After gaining attention from mtvU and national magazines following the release of their debut Old Dominion and subsequent followup Terror and Everything After, the band then proceeded to go into a bit of a period of hibernation and self-examination. Having lost and gained members, apparently parting from their label, selling their van, and readjusting their aim and approach for continuing forward (scaled down tour plans, self-release record model), the band is at a point where they’re genuinely making music purely for the love of it. And that sincerity is reflected all over their new EP, Mammoth Skin, Pt. 1 (as the title implies, Part 2 is coming early next year). The record is truly a labor of love from a band seeking only self-fulfillment. It’s poppy, it’s folky, it’s densely and melodically layered with sweeping harmonies and gang vocals, and the instrumentation is intelligent and tasteful. The tracks weave seamlessly from straightforward indie rock to progressive and epic. Hotel of The Laughing Tree have always been gifted songwriters and their latest release is their most focused, tastefully restrained, and consistently enjoyable. It’s the sound of a band remembering why they became a band in the first place, and oh what a wonderful sound it is.

Check Out: “People That We Please,” a poppy and progressive indie jam that juxtaposes an earnest, passionate vocal delivery over a hypnotic and layered groove that wouldn’t sound out of place in a Minus the Bear song. You, Me, and Everyone We Know- A Great Big Hole [self-released]

Quick Take: Everybody loves a good tale of redemption. To say You, Me, and Everyone We Know have had a tumultuous existence would be an understatement- in its 6 years of existence, the band has already gone through 11 members, leaving only singer Ben Liebsch standing by the beginning of 2011. Their/his latest EP A Great Big Hole is the band’s 4th, in addition to full-length in 2010. It’s also, perhaps, its most important. Bouncing back from a battle with alcoholism (the singer claims he’s now 20 months sober) and controversy surrounding the financial dealings with his bandmates (the catalyst for their departure), A Great Big Hole represents an artist back on track, and one aware and remorseful of his past transgressions. Its briefest (and most classic YMAEWK sounding) middle track, “I’m Alright” is a straightforward and poignant declaration that the singer, though still not perfect, is, well, alright. The EP is intentionally reflective of the natural progression of the singer’s feelings- its opener and title track “A Great Big Hole” dwelling on the damage and regret leading up to this point and its closing track “Coming Up Short” reflecting on the road ahead. “Coming Up Short” is also perhaps the most musically adventurous and a solid affirmation that Liebsch’s new perspective and life choices have had no ill-effect on his offbeat and brillant knack for crafting slightly off-kilter rock songs firmly rooted in pop punk. The EP ends with an urgently shouted “there will be no more wasted time for me” that resounds in a way that could easily also be the singer’s new life mantra. It’s clear You, Me, and Everyone We Know are at a crossroads, but it’s also clear, at least as far as Liebsch is concerned, that they’re just warming up.

Check Out: “A Great Big Hole,” which explosively and confidently opens the record with both the assurance that You, Me, and Everyone We Know are back and the understanding that Ben Liebsch has found peace, regret, and growth from his mistakes. It’s intimate and honest and a testament to the power of art over personal struggle. Rivalries- Out of Town and Back Again [Household Name]

Quick Take: It’s rare that I do this, but I’m putting the new EP from UK band Rivalries, Out of Town and Back Again, on the list without having heard the entire thing yet. The record is currently only available on 7″ from their London-based label (link below), but international shipping is incredibly reasonable so I plan to snag a proper copy soon! The band is currently streaming the song “Twelve Out of Ten” and I previously caught the track “Ten Things” (they’re switching what’s on their BandCamp each week), so my opinion reflects half of the record. Rivalries are a really unique band. I suppose you could call them pop punk, in the sense that they play punk rock with very melodic sensibilities but they definitely lean more on the punk than pop side of things. However, they’re only punk in sound because their attitude is the furthest thing from pissed and angry, or even heartbroken; this is perhaps the most positive, happy punk band I’ve ever heard (even their social media is all under RivalriesAreFun). With chants like “surround yourself with the people that you love/ never give in and never give up” overtop of fast and agressive punk riffs, Rivalries will have you raging for the optimism in your own personal perspective and outlook in the face of any adversity that comes your way. And that’s a refreshing take on punk rock I can get behind.

Check Out: “Twelve Out of Ten,” an upbeat and uptempo old school pop punk jam that is not only inspiring, but also a downright solid punk song at its essence. Quick Take: Ok, yes, I’m putting a rap record featuring Andy Milonakis (the perpetually adolescent-appearing due to a hormone condition, yet grown man, comedian and former MTV star-turned rapper) on the list. Yes, Three Loco also includes Dirt Nasty, a.k.a. Simon Rex, the former MTV VJ and mostly failed actor also turned rapper. Yes, the final member of Three Loco is Riff Raff– the bizarre commodity rapper who conjures early ’90s nostalgia along with embellished style and off-kilter flow and subject matter, who rose to fame on MTV’s From G’s to Gents. And yes, Three Loco is technically a comedy group, their album cover even a parody of the film Three Amigos (and the group’s name a spoof on alcoholic energy drink and college party favorite Four Loko). But hear me out: Three Loco are shockingly and undeniable good. Really, really good. With production help from the likes of Diplo and Sinden, the beats are fresh, embellished and simultaneously satirical of and relevant in the modern rap climate. Their style leans old school, but it doesn’t sound dated- it’s still a modern rap record for modern rap fans. You’re not going to find huge flourishing beats and auto-tune here, it’s definitely more minimalist in scope, but strong and cohesive nonetheless. The rhymes are just as satirical, an embellishment of typical hip hop lifestyle and boasting, but are so cleverly and confidently delivered that the lines between serious, boastful, and comedic are very much blurred. The history of its members and connotations of the group aside, ¡Three Loco! is a solid and enjoyable EP all the way through and so well-executed that I can’t even call it a novelty or guilty pleasure; it’s just good.

Check Out: “Neato,” the infectiously catchy, off-kilter, and confident opening track that gives every member a really strong moment to shine and encapsulates the weirdness and skill that the unlikely group possesses, lyrically and in delivery. Production-wise it sounds like it could be a Beastie Boys b-side. Quick Take: Hailing from Texas, Fairbanks are the kind of pop punk I can never seem to get enough of. Everything about their new EP, Eat This Record, from the production, the the harmonies, the instrumentation, the attitude, and even the album cover, would suggest that the band spent the last two decades frozen in some kind of punk rock time capsule and were awoken with instructions to write the followup to Green Day‘s Kerplunk. It doesn’t sound like an homage or period piece or modern embellishment of “classic” pop punk (I think it’s been long enough that I can start calling it that)- it sounds like a record teleported forward from that era. Fairbanks are a band clearly passionate about the music they play and unswayed by the typical tendencies the genre has accumulated throughout its progression. They’re not a commodity; they’re a true blue pop punk band and a damn fun one at that. If you grew up on classic pop punk, Eat This Record will take you back and if you consider Blink-182 to be your classic pop punk, the EP will serve as a great genre study of a less complicated era. I’m very curious to keep an eye on this band.

Check Out: “Distilled Manx,” which is arguably the EP’s strongest track. It’s a near-flawless genre study and an excellently energetic, angsty, and catchy jam. Curious about what the Warped Tour sounded like in ’94? Something like this.

Don’t forget to check out New Release Spotlight, Part 2 where I cover full-lengths!