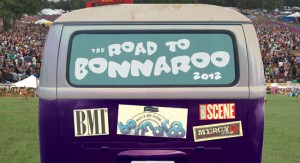 Here we go again.  It’s another round of Nashville bands duking it out for a coveted Bonnaroo slot.  By Lightning! won the first competition last month, and now we get a fresh slate of eight bands tonight that will be giving it their all to join them down on the farm this June.  Once again, the order will be chosen at random about 30 minutes before showtime, and each band will have three songs to convince the packed crowd that they are deserving.

So, without further ado, let’s take a quick look at the bands, and then get out to vote for your favorite tonight!

Evan P. Donohue brings his updated style of poppy surf rock with a lyrical delivery that would turn Elvis Costello’s head.  He’s been playing all over Nashville recently, so you’ve had plenty of chances to see him.  I’ve attached a player below with his 2010 release, Rhythm & Amplitude.

Five Knives brings the bleeps and blurps with a punkier than Sleigh Bells style.  It’s sure to have the crowd moving, and having collaborated with last year’s Road to Bonnaroo winner, Chancellor Warhol, can’t hurt their chances either.  Check out their December 2011 release UN below.

Marquee Mayfield will have to step up the R&B and soul stylings, and get the fans frenzied… which shouldn’t be too hard for these talented musicians.  Have a listen to “Dance” below, and you’ll see what I’m talking about.

Nikki Lane brings her folky Americana, and is sure to be a fan favorite.  Have a listen to her track “Gone, Gone, Gone” below.

The Running will have the crowd jumping with their dubby grungy ska licks.  Check out their record Not From Around Here below.

Static Revival have that southern fried alt rock sound pegged, and will be bringing most of the ‘Boro up to vote for them.  Check out a couple of tracks from their 2011 release Thank You For Being You below.

Tesla Rossa will be shredding it up with their acclaimed indie rock sounds.  Check out the track “Kinetic” below.

Wild Cub is the newish project that we’ve been hearing about from Keegan Dewitt, and tonight is the Nashville debut of this talented musician’s new band.  You can check out the video for “Two Hearts” below.

Wild Cub Wins Round 2 of the Road To Bonnaroo!!!