So, you aren’t in the mood for the experimental, multi-instrumental madness of Tune-Yards tonight?  Well, I think I’ve got something else that might tickle your fancy.  Yeah, I got your back… you can still have something to do tonight in Nashville. 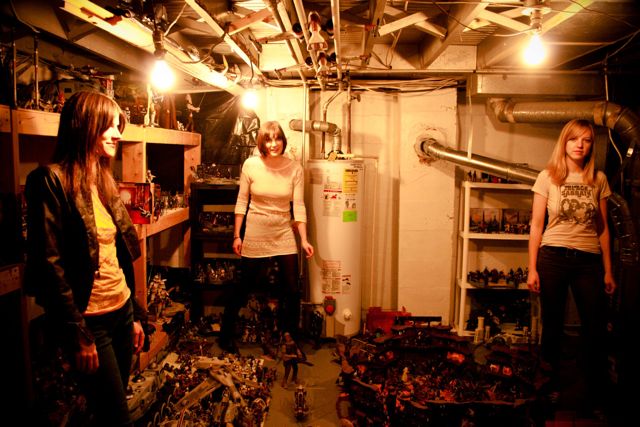 Don’t hang out in your basement with your toys
tonight.  Get out and see these gals at The 5 Spot.

She Might Bite is the moniker for Tara and Courtney Kimes out of Louisville, KY.  The story goes like this…. the two sisters set out to make a record in an old tobacco warehouse in the west end of Louisville, KY. Midway through the practice sessions the drummer handed Tara his electric guitar. What resulted was a rock EP that surprised everyone, including the sisters themselves.  Soon the sisters’ roommate, Kat Slaughter, took over the drums and She Might Bite was officially born.  Their four track initial offering is available here for download, or you can have a listen below.

In conversations with Tara over the past couple of weeks, she said they were trying to tweak their sound, which her big brother (yeah, I’m one of those too) said, “the vocals sound like girls trying to be Jack White.”  My (not big brotherly) response was “The Kills sound like that too, and they are pretty fantastic.”   Regardless, this show should offer some of the great stuff we hear below, and (according to Tara) more playful/creative/creepy tracks emphasizing a lot more vocal harmonization from She Might Bite.

It’s at The 5 Spot so you know the cover will be reasonable, and did you really need an excuse to drink beers on Friday night?  She Might Bite are the OPENING act.  So, if you want to check these gals out, then make sure you get there early (they go on at 9pm), and then stay late to support Nashville’s indie acts SpiderFriends, New Pleasure, and Siberian Traps.